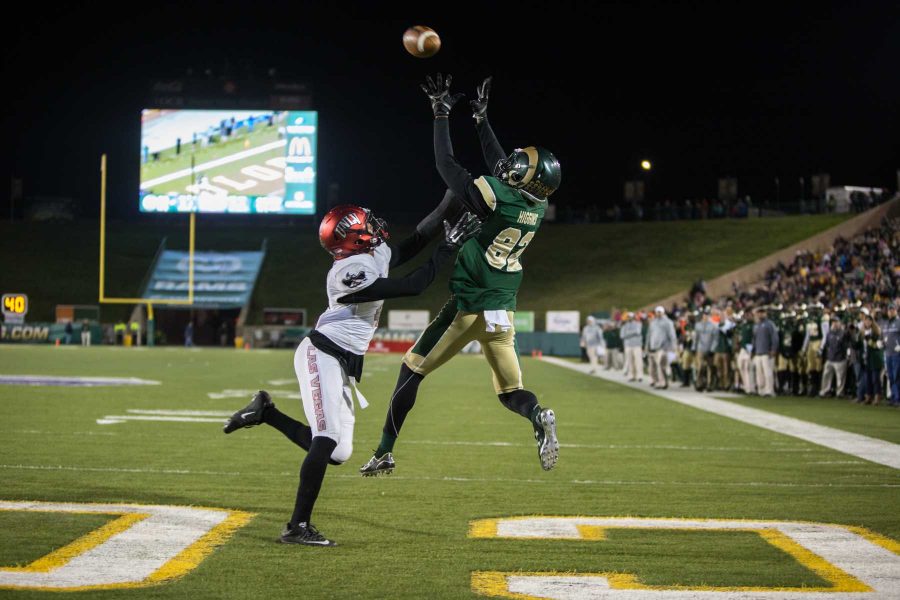 Saturday night was the kind of performance Colorado State fans had hoped to see from star wide receiver Rashard “Hollywood” Higgins all year.

Higgins, coming off a 2014 season in which he caught 96 passes for 1,750 yards and 17 touchdowns, came into this season as one of the top returning receivers in the country, and seemed like a surefire first-round draft pick. He was CSU’s first consensus All-American since Greg Myers in 1994, and he was one of three Biletnikoff Award finalists, alongside Alabama’s Amari Cooper and West Virginia’s Kevin White.

His junior campaign hasn’t been what he, his team or Colorado State supporters had expected. Transitioning into a run-heavy offense with head coach Mike Bobo, along with trying to develop chemistry with two new quarterbacks — Nick Stevens and Coleman Key — has caused a significant drop in Higgins’ production and big-play ability.

Before Saturday’s 49-35 win over UNLV, Higgins had just three games with 100-plus receiving yards and one game with 10-plus catches. Compare that to week 11 last season, when he had six 100-plus yards games, including three games in a row with 175 or more yards. He also had three 10-plus catch games at this point.

He’s been hampered by injuries, and also by an offense that has struggled to hit the big plays in the same way it did last season. Higgins’ frustrations have been evident on the field at times, but he says he feels like things are finally coming together for CSU’s passing offense with two regular-season games to play. A big part of that has been the development of his relationship with Stevens, who has finally seemed to get out of the shadow of Key.

“I feel like Nick was forcing a couple of the throws, and I’ve worked with Nick every day after practice to help get us better,” Higgins said. “If he throws a bad ball in practice, I’ll mark it in my head and then after practice I’ll re-run that route or stand there in the spot so he can throw the ball to me. Practice makes perfect, and Nick’s going to be great one day.”

On Saturday, Stevens was terrific outside of a poorly-thrown deep ball that led to an interception by UNLV defensive back Tim Hough. He found Higgins for three touchdowns, and Higgins had more receptions than the rest of CSU’s receivers combined.

It was a performance reminiscent of last season, when defenses simply couldn’t find a way to stop the Garrett Grayson-Higgins connection. Higgins isn’t likely to land back on the All-American team with the drop in production, and as the season draws to a close, the biggest question surrounding CSU’s team is whether or not Higgins will return next year for his senior season.

Higgins is projected by most draft sites as the 10th-15th-best wide receiver that is eligible for the NFL Draft in May. That lands him somewhere in between the second and fourth round, according to those same projections.

He has said time and again that he will wait until after the season to sit down with his mother, head coach Mike Bobo and others to discuss his options and review the information he gets back from the NFL regarding his expected draft stock. He’s expected to leave, but head coach Mike Bobo has his own thoughts about Higgins’ stock.

“I think we’ll do our due diligence and get the information from the NFL of where they see him, and he needs to make a decision that’s best for him and his family,” Bobo said. “We don’t know where that’s going to come back, but my personal belief is that he’s not going to be a first-rounder, and he needs to come back to school, finish his school and improve to get himself into that category.”