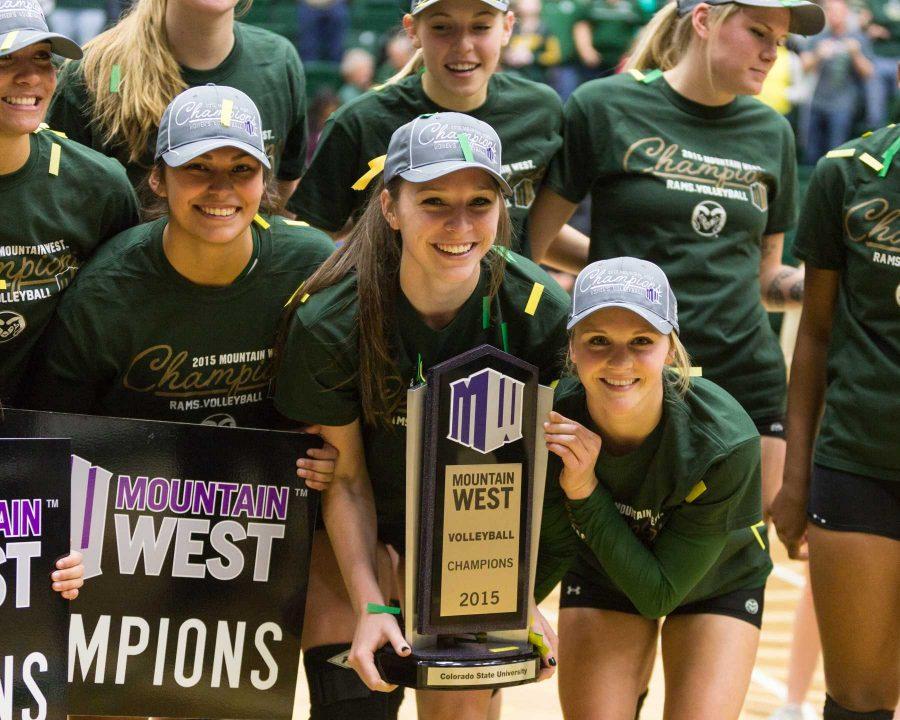 No. 13 Colorado State volleyball celebrated its seventh straight Mountain West title Saturday, which it clinched on the road Wednesday, by sweeping  Fresno State by scores of 25-19, 25-22 and 25-14 in front of its home crowd at Moby Arena.

Led by player of the match Alexandra Poletto, who finished the day with 12 blocks, Colorado State was able remain undefeated in conference play, and celebrate with the trophy in front of its fans in Fort Collins.

When asked if the trophies are starting to feel heavier, CSU standout Adrianna Culbert smirked.

“They’re all pretty heavy,” said Culbert, who has earned the nickname LeBron and may just end up with more hardware than the hoops star by the time she is finished at CSU.

Culbert began the match with an impressive kill, setting the tone right off the bat. The trend continued early as she hit 1.000 in the opening set against the Bulldogs, but as the match went on, Culbert struggled to continue the hot start.

What the Rams lacked offensively, they were able to make up for defensively.

“There’s no doubt that the big key tonight, in what I feel was a dominating performance, was the presence of our block,” CSU head coach Tom Hilbert said. “We were very well prepared. Fresno doesn’t run a super fast tempo in their offense. So we were able to get two blockers up, sometimes three, on their attackers.”

The defensive tone was set early when Poletto put CSU in a great position to win the opening set, impressively ripping off three blocks in a row, and giving  CSU a 21-11 lead. Fresno State battled back but the early lead proved to be too much as the Rams were able to gather themselves and secure the set victory.

Fresno State opened the second set quickly, gaining an early 2-0  advantage over Colorado State, and leading at one time 17-12 before CSU came storming back to win the set.

CSU carried the momentum from the second set and was able to pull away in the third after picking up the tempo offensively.

“I don’t think we were great offensively until the third set,” Hilbert said. “We had a hard time early getting our outside hitters going. We really weren’t playing in a fast tempo in our offense until the end.”

CSU has two remaining matches before postseason play, and will take on starting with Wyoming on the road Tuesday night, before heading home for the final match of the season next Saturday against non-conference opponent Iowa State.

A win against Wyoming would give Colorado State an undefeated conference record for the year, a feat the team has not accomplished since 2003.

Collegian Sports Reporter Justin Michael can be reached by email at sports@collegian.com and on Twitter JustinSportsCSU.