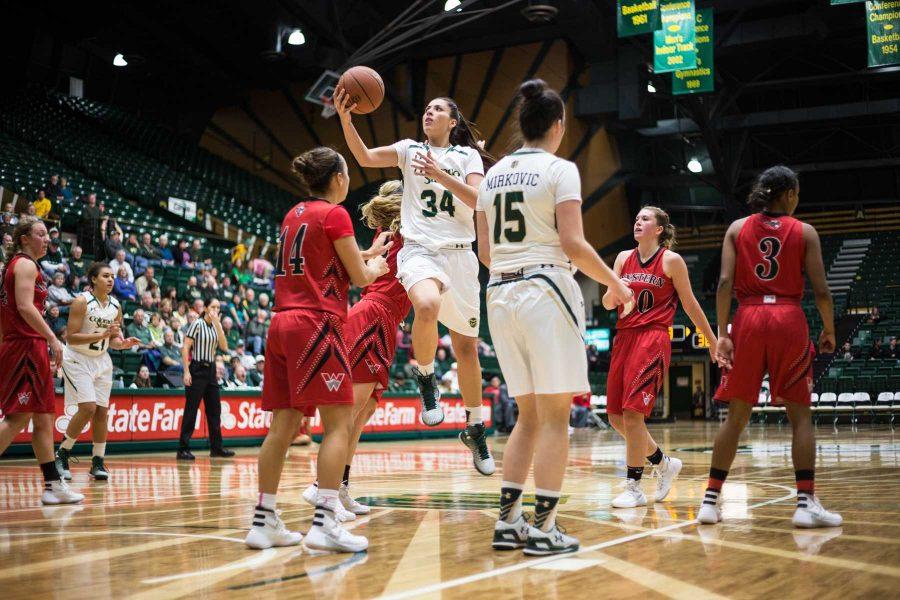 Alana Arias goes up for a layup in CSU's season opener against Western State. (Photo by Ryan Arb)

“We accomplished what we needed to accomplish tonight,”  head coach Ryun Williams said.

The Rams came out pressing full court, just like in their exhibition game game against SC-Aiken. It was too much for WSU to handle as CSU recorded seven steals in the first quarter.

CSU held Western State to just two points in the second quarter. At halftime, the Mountaineers had 21 turnovers and just 16 points. When the Rams weren’t getting steals, they were forcing shot clock violations.

“We like pressuring the basketball,” Williams said. “We’ve got a couple of kids who can be disruptive on the ball. (Keyora Wharry, Hannah Tvrdy and Callie Kaiser) have a good nose for the ball. We’ve got some length when we run and trap with (Gustavsson, Mirkovic and Hesseldal).”

The Rams had 39 points off of WSU’s 33 turnovers when it was all said and done.

Callie Kaiser, a true freshman from Broomfield, Colorado, delivered the most impressive showing of any bench performer for CSU. Her energy helped the Rams defensively in the first half and she was repeatedly able to score in transition.

“I just wanted to come in and play as hard as I could,” Kaiser said. “We have a great team and it’s a lot of fun.”

Hannah Tvrdy did not play due to a minor elbow injury, though Williams said she could have if needed. Once Tvrdy is back in the rotation, Kaiser’s minutes could decrease, but the freshman can still expect to see significant action in the future.

“She has a great motor,” Williams said of Kaiser. “She’s always around the basketball. She seems to be in every play. … I thought her decision making was really good.”

Alana Arias, Veronika Mirkovic, Stine Austgulen and Amanda Kantzy all played big minutes as well. It was the first time Austgulen had suited up since the 2013-14 season, when she only played two contests before being kept out with injury, and then redshirting the next season.

“I’ve been waiting for this for like two years,” said Austgulen, who hit two 3-pointers in her return.

Austgulen wasn’t the only Ram who was hitting threes – forwards Amanda Kantzy and Veronika Mirkovic demonstrated the ability to knock down outside shots as well.

“All of our threes, if they’re within the flow of our motion and we’re sharing the basketball, we’re going to let our kids shoot it,” Williams said. “We love that our big kids step out there and do shoot it. We like to drag other bigs out.”

Williams said that he plans to keep pressing full court against tougher competition until a team can force them not to. He mentioned on-ball defense as being an area the team can improve in going forward.

The Rams play at home again Tuesday at 7 p.m. against Incarnate Word.