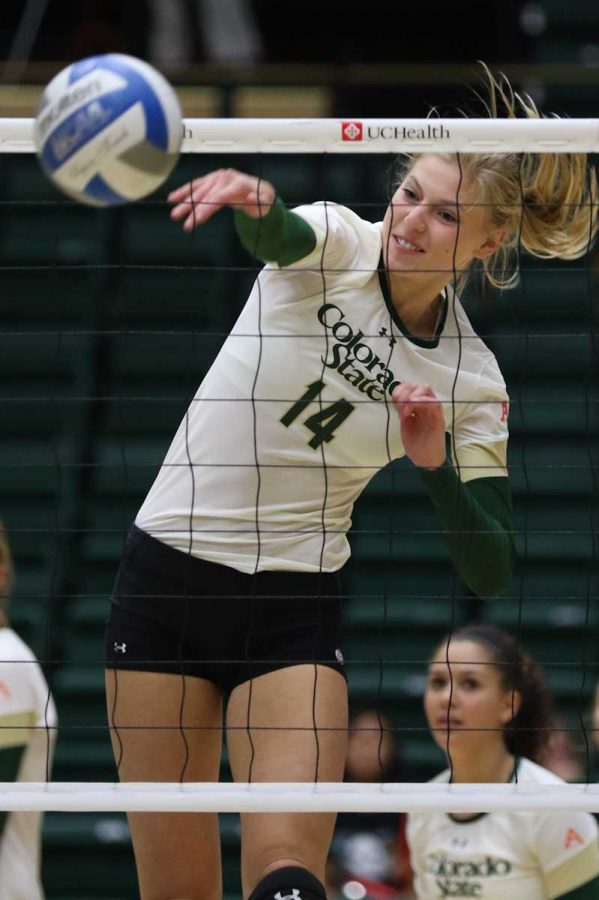 Alexandra Poletto finishes one of her four kills during CSU's sweep of UNC Tuesday. (Abbie Parr/Collegian)

Colorado State middle blocker Alexandra Poletto has been named Mountain West Offensive Player of the Week after hitting .500 percent over the course of CSU’s recent road sweeps of Boise State and Utah State.

The sophomore from Toronto, Ontario notched 19 kills with only three attack errors and averaged 3.17 kills per set over the Rams’ two most recent matches. She recorded blocks for the match point against both Boise State and Utah State.

CSU’s win over Utah State extended its undefeated streak to 11 games, and put them at 10-0

The Rams moved up to No. 18 (previously No. 20) in the latest AVCA Top 25 Poll, extending their streak of consecutive weeks being ranked in the poll to 39. CSU is up three matches on Boise State (7-3 MW), and four matches on Wyoming (6-4 MW).

The Rams return to Moby Arena when they host San Diego State Thursday at 7 p.m.