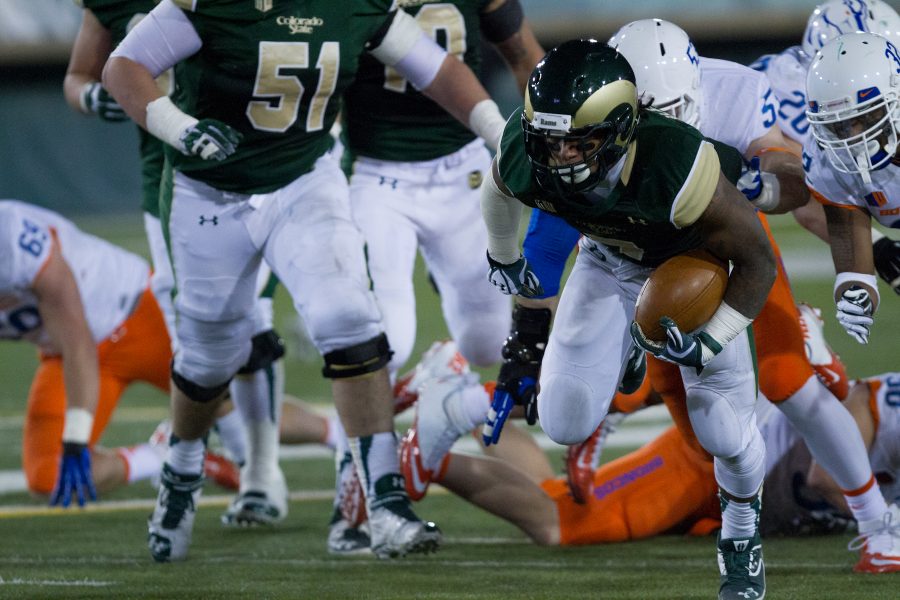 The Rams lose to Boise State 30-42 Saturday night at Hughes Stadium. Saturday night's game was the only game of the season to start at 6pm.

The Colorado State Rams face quite possibly their toughest test of the season in reigning Mountain West champion No. 25 Boise State. The Rams will be looking for their first ever victory against the Broncos, who won 37-24 on their signature blue turf. This year, the Rams get a crack at BSU in their own back yard. The Collegian weighs in on this week’s matchup.

Prediction: No team in the conference is on Boise State’s level. That said, I’m not expecting a blowout. CSU should be able to make it competitive at home, and maybe build some confidence in the process. Like last year, the Rams should be able to put some points up as long as they can get the ball to their receivers. But, the Broncos are too good, and CSU will struggle to keep them out of the end zone.

Prediction: Remember when Boise State rolled into Fort Collins four years ago and rolled CSU 63-13? This Saturday won’t be that bad, but it won’t be pretty. Boise State’s defense is among the best in the country, allowing just 51 rushing yards per game. Last season the Broncos flustered a CSU offense that had two NFL draft picks and an All-Mountain West running back. The Rams have none of those this year, and BSU’s defense may be even better. CSU has yet to prove that it can avoid costly mistakes and penalties, two areas where the Broncos take full advantage of their opportunities. It is by no means time to hit the panic button for Mike Bobo and Co., but they have got a long way to go to unseat Boise State as the league’s premier team.

Prediction: So far, CSU’s offense has yet to show it’s come to full fruition. While the Rams’ young quarterbacks have handled adversity late in games at times, forcing overtime in a couple, I don’t see CSU staying close to Boise State. The Broncos’ secondary leads the nation in interceptions, and its defensive line is deep enough to ensure its rushers are plenty rested the entire game. As stellar as CSU’s receiving core can be, open looks will be hard to come by for Nick Stevens. And, I doubt CSU can trounce the Broncos with its running game. The Rams will cross into Boise territory, but will be held to field goals for the most part.

Prediction: Ever try to stop a freight train? Yeah me neither, but that’s what CSU will have to try to do Saturday. This Boise State team is steamrolling right now, coming off a 55-0 beatdown of Hawaii last week. The Broncos would be undefeated if not for a BYU miracle bomb. The Rams’ run defense really scares me after giving up almost 200 yards rushing to Utah State’s backup quarterback last week. I expect Boise State running back Jeremy McNichols to have a big day running the football. Nick Stevens is facing a secondary that knows how to take the ball away and probably won’t let the Rams’ receivers beat them very often. I do see CSU turning it around this season, just not this week.

Prediction: Although the Colorado State football team is still on the grind to improve every week, this week’s challenge will prove to be simply too much for the Rams — as it would be for many teams. Since 2000, with an overall record of 171-29, The Broncos are the winningest football program in the country. They rank ahead of even Ohio State (162-36), Oklahoma (165-39), LSU (154-45) and Oregon (150-48). The Broncos are sound, do not beat themselves, and can do equal damage on both the offensive and defensive sides of the ball. Tt will take at least another week for the Rams to get their first conference victory.

Collegian Sports Desk can be reached at sports@collegian.com.