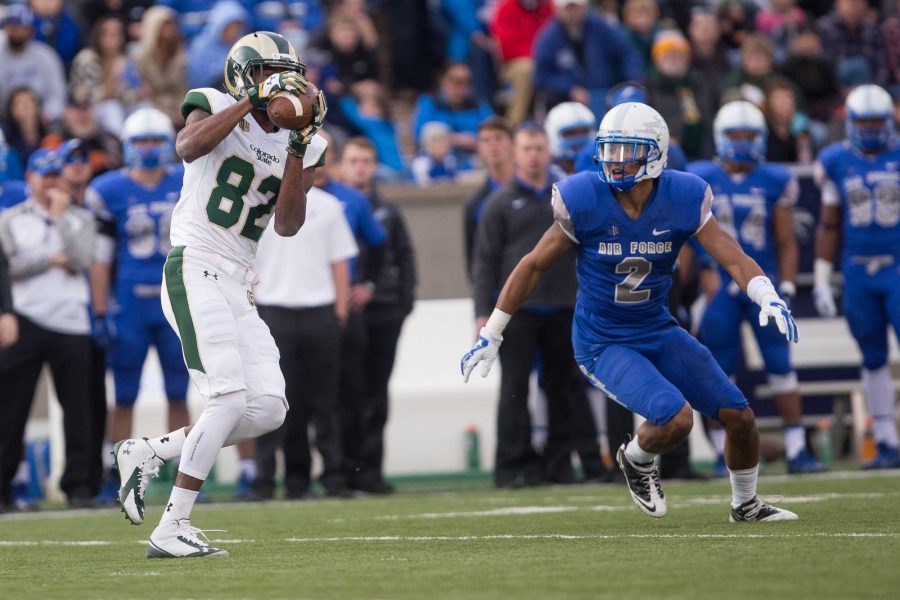 Members of the Collegian sports staff weigh in on Colorado State’s homecoming football game against in-state rival Air Force, and offer their predictions for who will return home with the Ram-Falcon Trophy:

Prediction: I’m scared to pick this game, because I’m still not sure what to make of Air Force’s season thus far. The fight it gave No. 4 Michigan State was impressive, and San Jose State is no pushover either. Still, this just isn’t the 10-win Falcons team that upset the Rams late last season. Maybe the Falcons are exactly who they’ve always been: a tough but beatable old-school football team who can give any Mountain West team fits with their triple option rushing attack. The key word there was “beatable”. CSU’s last two match ups against Utah State and Boise State never really felt winnable. This one does, but the Rams will need to control the ball and avoid dumb penalties. Feed Jasen Oden Jr., just throw it in Rashard Higgins’ general direction whenever AF loads the box, don’t get called for holding 107 times, and the Rams should be able to notch their first conference win.

Prediction: Ah yes, the homecoming game. The Rams are coming off a game last week where they got absolutely drubbed by Boise State in all three phases of the game. Now Air Force comes to town, and I really hate to be a Debbie Downer on all the school spirit of this week…but I don’t see the Rams getting a W in this game either. CSU’s run defense has continued to struggle and now instead of focusing on one main running back like last week, it gets more difficult as Air Force uses multiple backs in its triple option offense. The Ram’s struggled stopping the triple option in last year’s upset loss to the Falcons and I see that continuing on Saturday. It seems like it’s a revolving door situation for the CSU quarterbacks. Mike Bobo can’t make up his mind on who should play, as neither Nick Stevens nor Coleman Key have truly been impressive these past few games. Stevens will start, but like last week, who knows how long he’ll play.

Prediction: The Rams are hungry this week. They know they need to bounce back to maintain some morale for the rest of the season. Furthermore, it’s homecoming, and Air Force was the team that upset CSU in its final regular season game last year. Desire for some revenge will force the Rams to get it together this week and run the ball hard into Air Force’s grill. As questionable as CSU’s passing game has been lately, establishing the run might let its quarterbacks gain some confidence and let loose a couple of times on some deep throws to this studly receiving corp. Perhaps after seeing how much work they have cut out for them if they want to lead a winning offense against a team like Boise State, Nick Stevens and Coleman Key will be sharp and start paying attention to the details. One of them has to step up and understand that it’s possible to learn quickly while still in the learning process, and why not against an in-state rival?

Prediction: This is a defining moment for CSU’s season if there ever was one. Though just about everyone expected a drop-off from last season, I don’t think anyone predicted CSU being 2-4 at this point. Another loss, at home, would drop the Rams to 0-3 in conference and crush the confidence of a young team. But luckily for CSU, the Falcons are beatable. The Rams will need to find Rashard Higgins early and often, and they will have to avoid the mistakes that have plagued them all year. Hughes should be a near-sellout, if not completely full, so you know the atmosphere will be rocking. Last year Air Force ruined CSU’s hopes of making a New Year’s Day Bowl, so there has to be a little revenge on the minds of CSU players. Expect a close one, but CSU will make just enough plays to win this one late.

Prediction: CSU needs this victory to keep the season alive. A loss would give the rams  three conference losses to start 2015, and making a bowl appearance doubtful this year. Air Force beat Colorado State last season, and have had the Ram’s number over the past decade. Ram fans are anxious for a victory, and feel this is a winnable game. Homecoming weekend will provide a good crowd for the in-state rival, but CSU will need to be disciplined. Colorado State has struggled to stop the run over the past month, and Air Force brings one of the best rushing attacks in the nation to Fort Collins. Linebackers will have to stay in position or Air Force’s triple-option could be a huge issue for the ram defense. Whether Coleman Key or Nick Stevens is at QB for CSU, sustaining efficient drives will be crucial in beating the Falcons. The more CSU has the ball, the less Air Force will be on the field running their offense. The game will probably be close and may come down to the last possession.

Collegian Sports Desk can be reached by email at sports@collegian.com and on Twitter @emccarthy22.