Rams soccer finishes season with a 2-1 loss to Wyoming 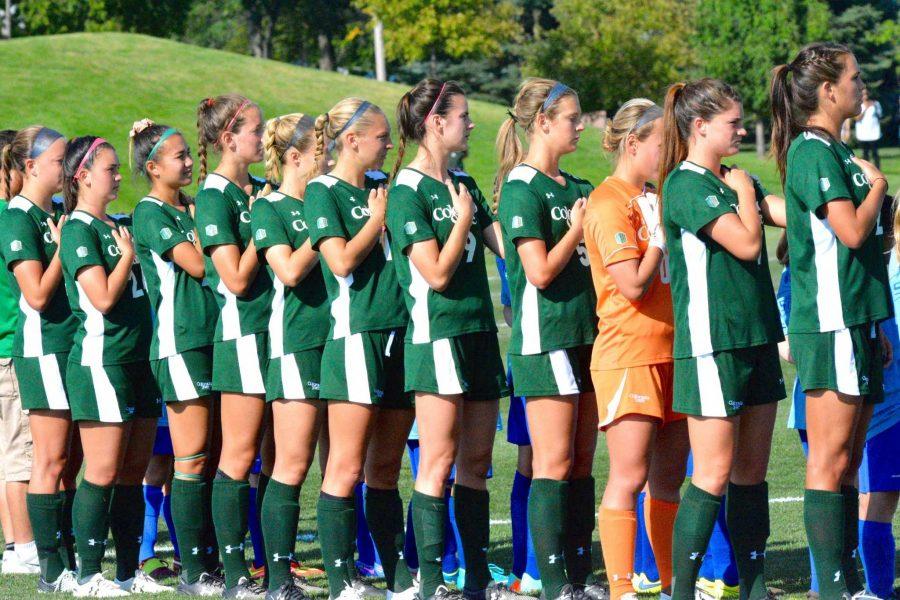 The seniors put on the green and gold and led their Rams into battle one last time.

As soon as the game kicked off, the Cowgirls were all over the Rams. In just the 2nd minute, Kaitlyn Lomsnes gave Wyoming a 1-0 lead. Lomsnes finished off a ball played to her from teammate Anne Hinman. Not the way the Rams wanted to start senior night.

The Cowgirls controlled play throughout the entire first half, and gave the Rams little room to get any momentum. Wyoming added onto their lead when their star player, Shaina Ashouri, crossed a ball through the box. The ball found the head of Alyssa Murray and put the Cowgirls up 2-0 in the 24th minute.

The first half ended with the Rams trailing 2-0. It was a 45-minute uphill battle for the Rams, who could only muster one shot attempt against the stout Cowgirl defense. Wyoming registered six shots, five on goal. CSU goalkeeper Jesse McGinley made three saves in the half.

The Rams’ seniors would get the team on the board late in the second half, as Gianna Bertana scored her second goal of the season in the 86th minute. Bertana raced into the box and sent a rebound home after a shot from freshman Hannah Gerdin.

Bertana’s goal was the lone bright spot on senior night for the Rams, as the Cowgirls would go on to win the match 2-1.

Following the match, CSU coach Bill Hempen addressed the crowd, and spoke individually about the team’s five seniors. Jenna Howerton, Jessica Stauffer, Erika Bratshun, Gianna Bertana and Megan Speed all had their numbers painted onto the field, and had their turn to have Hempen say some kind words on their behalf. Hempen spoke emotionally about each player, and will miss the leadership and tenacity they provided going forward.

“It wasn’t a perfect world for (the seniors) from the start, and yet they made the best of it.” Hempen said.

The seniors leave the program having accumulated 209 games, 170 starts, over 15,000 minutes, 9 goals, and 10 assists in their careers. The Rams will undoubtedly miss their contributions. Going forward, the remaining players will need to build upon what this years seniors have started, according to Hempen.

“If the kids that remain can keep the spirit of the kids leaving, then we’ll be okay,” Hempen said. “We will bring in quite a few more players that will challenge and we think we’re headed in the right direction.”

The sun has set over Lagoon Field for the final time this Rams’ soccer season, and with it goes a season’s worth of ups and downs. Hempen described the Rams’ season best:

Collegian Soccer Reporter Chad Deutschman can be reached by email at sports@collegian.com and on Twitter @emccarthy22.