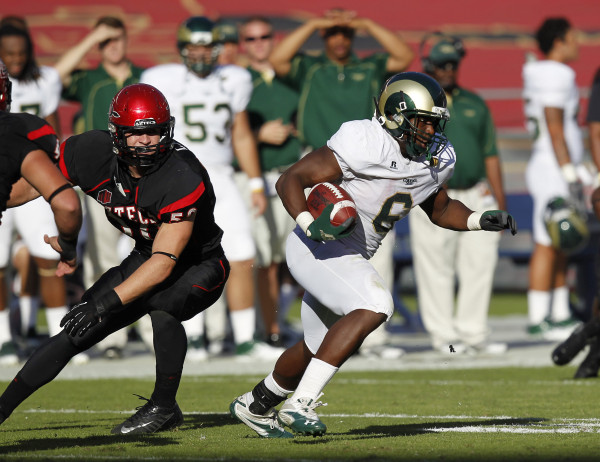 Heading into Saturday’s match up between Colorado State (3-4, 1-2 MW) and San Diego State (5-3, 4-0 MW), The Collegian has partnered with SDSU’s independent student-run newspaper The Daily Aztec to bring you opposing columns regarding this weekend’s game at Hughes Stadium in Fort Collins, Colorado.

It’s been all peachy for the San Diego State football team since it entered Mountain West play.

It looked mighty bleak for head coach Rocky Long and company after the team dropped it’s only three non-conference games against Football Bowl Subdivision opponents, including University of South Alabama.

If you would’ve told me after the loss to South Alabama that the Aztecs would be favorites on the road at Colorado State (-3 ½ according to Vegas.com), I would’ve thought we were talking about basketball.

It’s been a simple strategy for the Aztecs: run, run and run some more.

It’s tough to blame them when they have a running back like junior Donnel Pumphrey at their disposal.

Going into Saturday’s game, he is one of just three players in the country to lead his team in rushing yards, receiving yards and completions.

Expect Pumphrey to be receiving handoffs left and right this week.

Although he doesn’t drop back often (10 times last week), he’s still been effective managing the offense.

“You can’t mess up a winning formula when it’s working,” Smith said Tuesday in the team’s weekly press conference. “The offensive line is playing great and the running backs are running it well. Something people don’t see is the wide receivers blocking really well on the perimeter.”

While the Aztecs have an electric playmaker in Pumphrey, they will have their hands full with senior wide receiver Rashard Higgins.

Senior defensive back Domontae Kazee leads the MW with five interceptions and his counterpart, senior J.J. Whittaker, is no slouch either.

However, Higgins should provide the Aztecs with their biggest challenge at receiver all season.

“Just watching the film, he runs good routes and has good speed. He attacks the ball which is usually what separates good receivers from average receivers,” senior defensive back Pierre Romain said at the press conference.

Outside of maybe Utah State, CSU is going to be the biggest challenge for the Aztecs in conference play so far.

The Aztecs have won the last five match ups against CSU. The last one was a 38-14 win in 2012 at Qualcomm Stadium.

Long isn’t taking the Rams lightly, considering they are coming off a 10-2 regular season and have numerous impact players that have returned.

“They have a lot of starters or guys that started some of the time, a lot of them coming back off a 10-2 team last year,” Long said Tuesday. “They’re used to winning and they know how to win. That puts another hurdle in front of us that we have to be able to jump over.”

A key for the Aztecs this weekend will be putting some pressure on redshirt-sophomore Nick Stevens, so the secondary doesn’t get exposed by Higgins and the rest of the CSU wide receivers.

Junior linebacker Calvin Munson has been the lead pass rusher for the Aztecs this season with a conference-best seven sacks.

With all that being said, if the Aztecs’ defense continues its strong season and Pumphrey runs the ball like he has up to date, the team has a good shot at going 5-0 in conference for just the fifth time in program history.

The Colorado State football team thought it was out of the woods after facing Utah State and Boise State to begin conference play.

The Rams were wrong, as they now turn around from their bye week to host San Diego State, the only Mountain West team with an unblemished record, coming off of a dominating performance against the Aggies.

That being said, the Rams have some momentum for what feels like the first time this season. Nick Stevens is finding his rhythm as a starting quarterback, Jasen Oden Jr. has established himself as an every-down back and Rashard Higgins is finally close to full health.

But surprisingly, Higgins hasn’t been the most electrifying player in the conference this season. That honor might go to Aztecs running back Donnel Pumphrey.

The Rams have struggled to stop the run at times this year. Against UTSA, they allowed Jarveon Williams to rush for 170 yards on 13 carries. A week later, they gave up 298 yards on the ground to Utah State. The week after that? Boise State’s Jeremy McNichols bulldozed the defense for 104 yards and two touchdowns.

This week won’t get any easier with Pumphrey coming into Hughes Stadium in Fort Collins, Colorado.

“I got a chance to see Ronnie Hillman play, so I think he’s pretty much the same back,” CSU safety Kevin Pierre-Louis said. “He’s quick, he’s fast, he can bounce it outside and he can really get you on the cutbacks.”

Sealing off outside edges has been an issue though, and linebacker Kiel Robinson pointed that out as something the Rams need to do better if they are going to contain the Aztecs.

The run defense showed some promise against Air Force, where it didn’t have to worry much about the passing game. While SDSU obviously isn’t a triple-option team, what the Aztecs do in terms of their run blocking does have some similarities to Falcons, and they don’t throw at a high volume either.

“Nobody’s really been able to contain (Pumphrey), because he’s going to get his touches,” CSU head coach Mike Bobo said. “Running backs, sometimes it’s a little easier to get guys touches and carries, and they’re committed to the run. They’re committed to what they’re doing, and they play good defense, which backs that up, meaning they get the ball back for their offense a lot and the offense is able to stay patient.”

CSU needs to score points of its own, which has not come easily this season. One player who has been able to find the end zone though is Joe Hansley, who leads the Rams with five receiving touchdowns. He is excited for the opportunity to go up against SDSU’s secondary and its unique looks, as well as it’s confidence in defensive backs to play press or man coverage.

“As wide outs you kind of take press man-to-man coverage as disrespect, that’s just kind of how we see it so when we get press coverage we get excited to go out and beat them,” Hansley said.

It sounds good in theory, but the Aztecs defense has been a terror on the field. In contrast, CSU’s offense looks great on paper, but has struggled to put it together until its most recent game with Air Force.

If the Rams – Stevens in particular – can build on some of that momentum, they could give SDSU a run for its money Saturday. Home field advantage always helps, and the bye week has allowed a heavily utilized Oden to rest, while also allowing Higgins to get back in better shape.

The Aztecs have been dominating the MW for a reason though, so the Rams will likely have to wait another week to start stringing together some wins late in the season.

But as Bobo said, “nothing surprises me on Saturdays.”