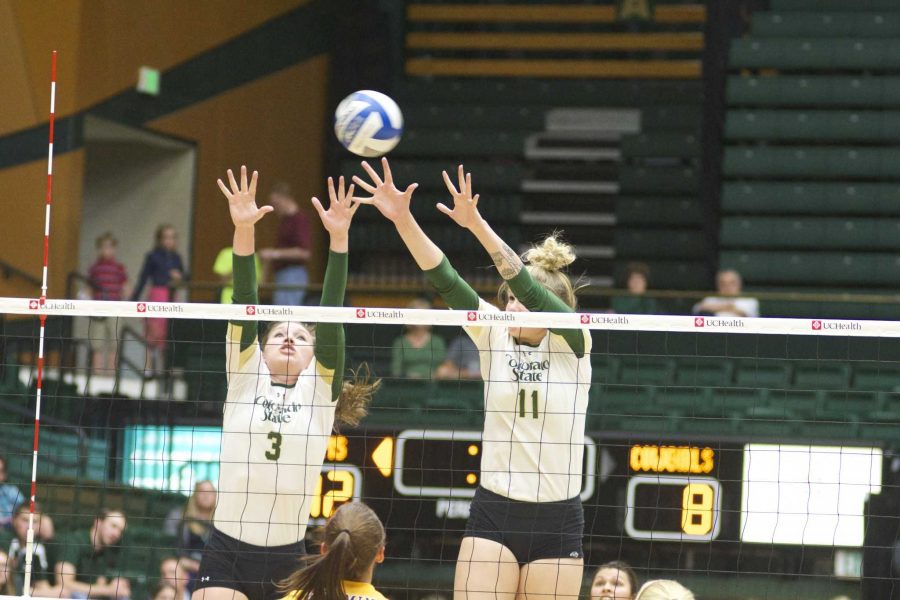 “We managed some of the things Wyoming was doing early with the shots to try and get our setter out,” Hilbert said. “And really what I said at that point was it’s going to have to be a big day for the outside hitters. And both of them responded quite well.”

To say CSU outside hitters Alex Reid, Adrianna Culbert and Jasmine Hanna responded well may have been an understatement.

Culbert had her fifth triple-double of the season and officially broke Colorado State’s record in tonights match against Wyoming. She credited her successful night on the court to the Rams working as one throughout the match.

“Crystal (Young) was setting the ball really well to me and so it was giving me a lot of options hitting,” Culbert said. “I think we were all just covering each other and just working together as a collective unit.”

Culbert led the Rams in kills with 12, and Hanna and Reid added 9 kills each.

Hanna had five kills during the third set, which the Rams dominated. Hanna said the team fed off of the energy and environment.

“It was just very energetic out on the court,” Hanna said.

The Rams performance in the third set was some of the best volleyball they have played all season. Senior Alex Reid explained that she was enthused by the mindset of the team.

“Instead of us relaxing, we really went out there,” Ried said. “And we were like, ‘lets show this team what we have,’ you know? And it was fun because everybody was on their A-Game. Everybody was cheering for good points, letting go of any missed points and I think this is the best we have played all together this entire season.”

Despite the sweep, Hilbert still expects a challenging match when the Rams travel to face the Cowgirls later this season in Laramie, Wyoming.

“I’m sure that the match in Laramie will be harder than this one,” Hilbert said. “But I don’t want to take any credit away from my players because I think we played a very, very good game in a lot of areas.”

“We served the ball exceptionally well tonight,” Hilbert said. “I thought we started blocking balls really well especially in the third set, and I think we kind of deflated their will a little bit. I’m very proud of my team, and now this sort of wraps up the first half of conference for us.”

The Cowgirls, known as one of the best blocking teams in the nation, were actually out-blocked 9-8 by the Rams.

“Knowing that we controlled our side of the court the entire way through is a great feeling,” Culbert said.

Hilbert acknowledged his team’s success and chemistry, but still thinks Wyoming will be a major challenge down the road.

“I want to officially say: I don’t think we got Wyoming’s A-game here, and I think our players probably know it,” Hilbert said. “I’d like to think we had something to do with it with regards to blocking the ball well, and being able to transition and do some good things.”

Collegian Sports Reporter Pia Myers can be reached by email at sports@collegian.com and on Twitter @ByPiaMyers.