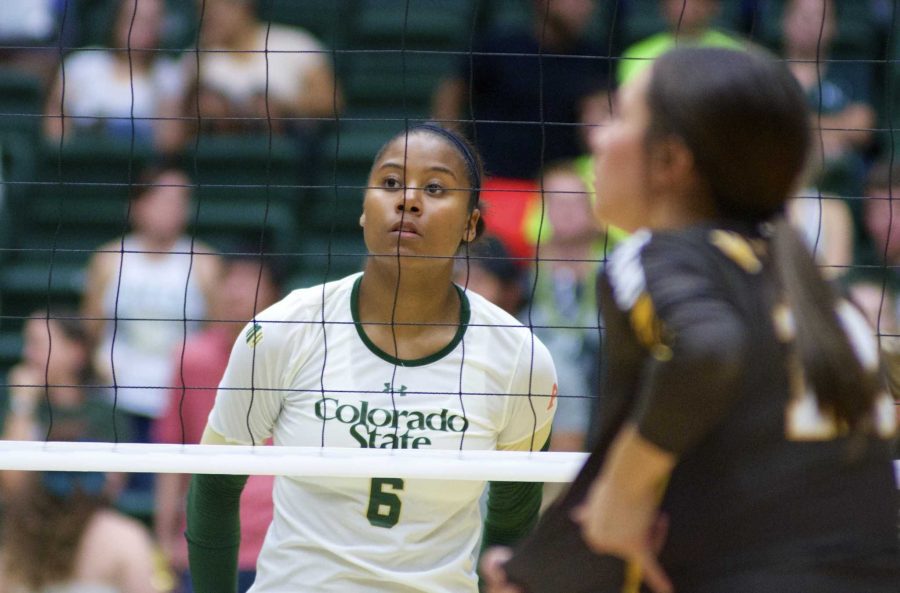 There is a town in the Eastern Valley of Arizona that resides roughly 40 miles southeast of Phoenix, Arizona. Nearly 27,000 people get to call Queen Creek, Arizona home, and one of those thousands is Jasmine Hanna, a sophomore outside hitter for Colorado State volleyball.

Hanna refers to Queen Creek as a “small little town” and that it was there that she grew up beside her older and younger brother, and would soon find that she discovered her passion in life in this small little town she calls home.

She started her volleyball career somewhat later than most Division I athletes. She did not start playing club volleyball until her freshman year of high school.

The late start would not inhibit her bright volleyball future.

Hanna had the opportunity to train under Molly Stark, a celebrity in the volleyball world, on her club team at Spiral Volleyball Academy. Stark coached her teams with the same mentality that got her a D-I full-ride scholarship to the University of Notre Dame.

“We did really well. We were one of the best in the country,” Jasmine recalls of her club volleyball experiences.

“I did pretty well in volleyball,” Hanna said humbly. “I was an All-American so that was really cool.”

With Hanna being named an All-American, one of the top 100 players of her class, finishing her high school volleyball career ranked first in school history for career kills and kills per match, and being a three-time MVP and team captain, it was obvious that her dream of playing college volleyball truly could become a reality.

“I got my first recruiting letter when I was a freshman,” Hanna said. “I was like hey, I could maybe make this happen.”

Not only was a dream of Jasmine’s coming true before her eyes, but it was as though a weight had been lifted off her shoulders. Starting playing volleyball later than her fellow teammates and competitors had put her behind on the learning curve. Others had more years to learn, to become confident in their game and to be looked at by potential recruiters.

Hanna had spend a decent amount of time in Colorado due to traveling for tournaments, which made her choice of schools very easy.

Easing into a new place to call home and starting her career as a Division I volleyball player was a large transition for Hanna  especially in regard to playing the actual sport since volleyball changes drastically from the high school level, even club play, to collegiate volleyball.

“I was like I don’t know, I’m going to try my hardest and just do what I think I know,” Jasmine said of her freshman year, “but playing a whole season now I know what scores, I know what to do, I know what things should look like. I know how to identify sets better. I just more confidence coming in sophomore year.”

CSU head coach Tom Hilbert knows what Hanna brings to the team as well as anyone.

“She’s athletic, she’s got great hitting velocity,” Hilbert said. “She came in as a freshman and was just tremendous. This year we’ve put a lot more expectation on her so she’s kind of been up and down. But she’s been handling it very well.”

The expectation that comes with CSU volleyball is Mountain West supremacy. Her one goal this season?

“To win another Mountain West championship, of course, and to do it with this great group of girls,” Hanna said with a slight smile. “That’s the goal.”

Collegian Sports Reporter Pia Myers can be reached by email at sports@collegian.com and on Twitter @ByPiaMyers.