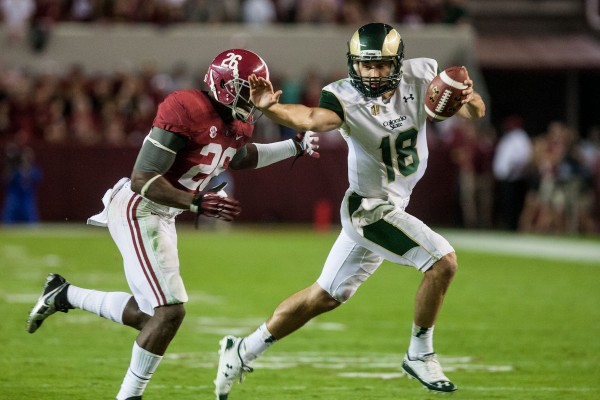 Colorado State quarterback Garrett Grayson (18) stiff-arms an Alabama defender during the Rams 31-6 loss to the Crimson Tide in 2013.

Former Colorado State and current New Orleans Saints quarterback Garrett Grayson was apart of the revitalization of the CSU football program. Under former head coach Jim McElwain, the Rams turned a program that won three games for three consecutive years into one that was within two games of winning the Mountain West last season. After CSU’s 41-10 loss to Boise State Saturday night, which dropped the Rams to 2-4 overall and 0-2 in the Mountain West, Grayson had strong words on Twitter about CSU’s focus seeming to be more about their “swag” and less about their on-field performance.

Grayson had another tweet, which he deleted. After receiving backlash from CSU fans, Grayson clarified his comments on a few ensuing tweets.

@FoCoRams this isn’t a shot at our coaches AT ALL. I love bobo. I just think we need to stop being so concerned with how we look, just play

Fans need to realize I love bobo and what he stands for. Wasn’t a shot at him AT ALL. Just somethin I think shouldn’t be such a priority.

It’s safe to say expectations have been raised for Colorado State football.