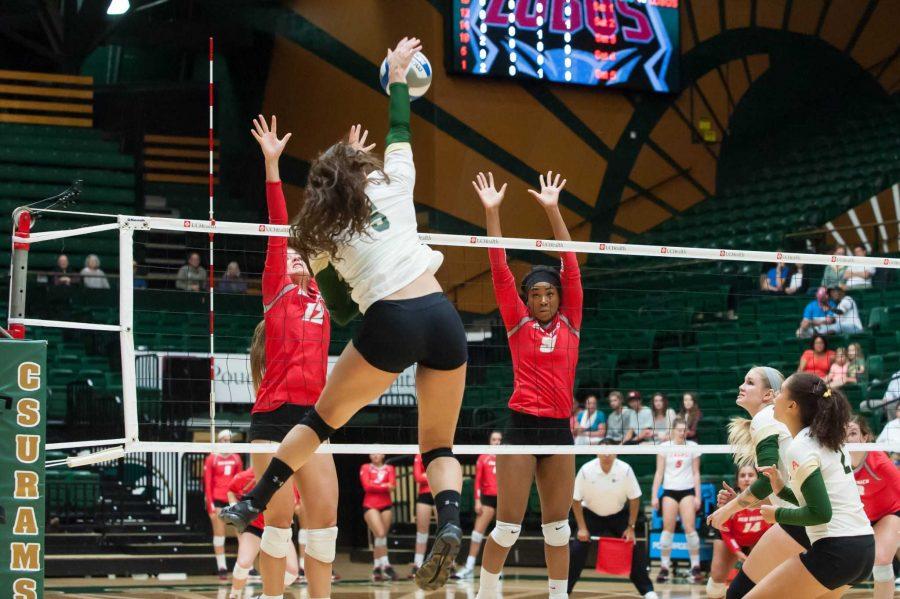 Head Coach Tom Hilbert was pleased with many of his players Thursday night: Jasmine Hanna, Crystal Young, Alex Reid and Acacia Andrews to be specific.

Setter Crystal Young has been focusing on taking more risks on the court, and she finally implemented what she has been practicing during the New Mexico match with Adriana Culbert.

“There was some nice things that happened there,” Coach Hilbert said about Young and Culbert’s chemistry on the court.

But Acacia Andrews and Alex Reid brought the lethal attacks against the Lobos that essentially lead to the Rams’ sweep.

“Acacia, both of our middles actually, when they got the right locations in sets were unstoppable, and I was very pleased with how they played,” Coach Hilbert said.

Andrews had 7 kills tonight and 6 blocks for the Rams, but she still was not satisfied with her game.

“I think we could have done a better job blocking the middle,” Andrews stated. “I think that I missed some assignments, like their outside balls were high enough that I should have been able to block the middle and then go outside…They have varying tempos across the board.”

Hilbert was determined to keep the ball going towards Andrews, so long as she kept hitting around .500.

“We’re doing all this stuff and we’re running around and we’re doing some nice things,” Hilbert said. “Acacia’s hitting .500… But (Adriana Culbert) tries that dump on that play and I’m like, ‘Just set the ball to Acacia Andrews, she’s hitting .600.’”

As Andrews hit above .500 for the match, plus a double-double from Reid, CSU’s offense was quite the team to try and block.

“They were tripling us, and we were still getting kills,” Hilbert said.

But Reid owes some of her 15 kills she notched Thursday to getting hit in the face in the middle of the second set.

“Yeah I was pretty pissed…You know when you get hit in the face you can do either two things: you can cry about (it) or you can get pissed. And I got pissed, so I just used that to start getting kills,” Reid explained.

No matter what fueled Reid’s fire, it clearly worked. The senior transfer totaled 12 digs and 2 blocks to go along with her 15 kills while still hitting .229.

“I thought my defense was a lot better,” Reid said. “I was really working hard on staying home and balanced, and just reading the hitters.”

As the Rams head into their next match Saturday against Air Force, Hilbert has the same objective in place for his team as he had against New Mexico: slowing down outside hitters.

“I told my team before the game, ‘I’ve seen box scores on this team before and their middles hit great, but you slow their outsides and you win the match,’ and that’s what we did,” Hilbert said.

CSU needs to keep this strategy going strong as it heads into its match against Air Force, even though the Rams have won the last 43 matches against the Falcons with a combined set score of 129-4. But that record is not diminishing Hilbert’s outlook of his next opponent.

“(Air Force) will come in and compete,” he said. “When you’re in the position they’re in, those kids go out and get after it hard every day. And when they come in here, they’re going to play hard and they’re going to be competitive…We need to be well prepared because it’s as good as they’ve been since I’ve coached here. So we need to be ready.”

The Rams face the Falcons at 12 p.m. noon in Moby Arena Saturday.

Collegian Sports Reporter Pia Myers can be reached by email at sports@collegian.com and on Twitter@ByPiaMyers.