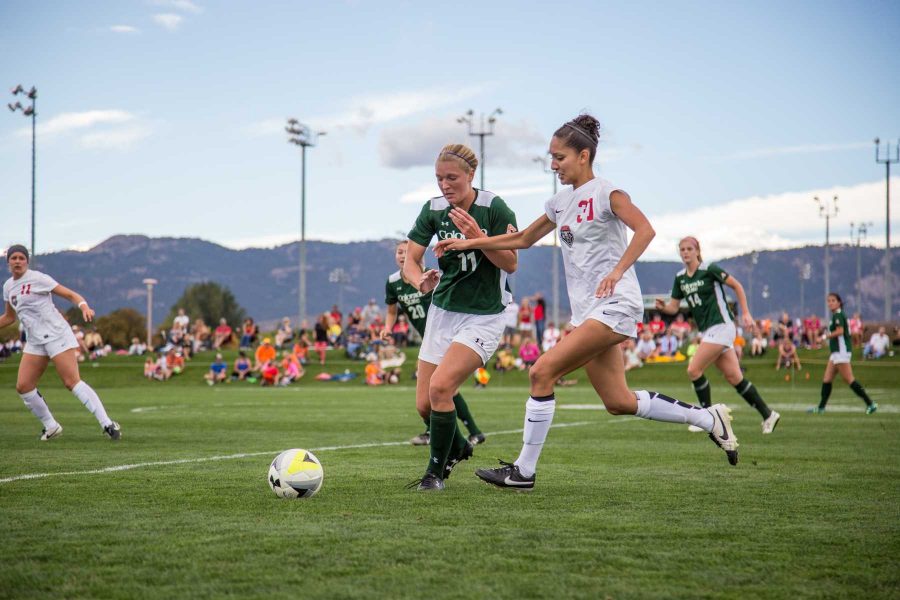 Cam’s Army chanted and stomped their way down from the Lory Student Center onto Lagoon Field and carefully chose a spot right behind the Utah State goal to watch the Rams take on the Aggies. Accompanied by vuvuzela’s and bucket drums, Cam’s Army was loud and proud. The first ever March to the Match in support of Rams soccer was successful, but fans would walk away with broken hearts.

A scoring drought continues to remain in full effect for Colorado State. CSU has now been shut out in three straight matches.

The Rams went back and forth for the full 90 minutes with the Aggies. Both teams implemented the “bend, don’t break” style of defense. Each promising attempt for the Rams was matched with a good look for the Aggies. Both defenses held strong however, as neither team could crack the scoreboard.

Overtime looked imminent, but with 40 seconds remaining, the leading goal scorer in the Mountain West found a way to give Utah State the win.

Jessica Brooksby raced down the left side of the pitch, and sent a ball on the ground heading towards the bottom right corner of the net. The ball looked fairly innocent when it came off Brooksby’s boot, but CSU keeper Jesse McGinley was unable to make a play on the ball and it found its way off the right post and in, silencing Cam’s Army and giving Brooksby goal number 11 on the year.

“There are some gut-wrenching losses, and this one’s going to go down on the list,” said CSU coach Bill Hempen. “I mean we’ve lost in OT and that’s hard enough, but to be battling like that and then to give up one at the last bit, that’s tough.”

The Rams have lost three games in overtime this season, and now can add a buzzer-beating loss onto their list of heartbreaks.

Cam’s Army may not have gotten the win it wanted to see, but there is no doubt the fan club had a positive effect on the Rams. Senior Megan Speed was proud of the way the Army came out to support the Rams.

“I thought it was awesome,” Said Speed. “I wish we had that (all the time). I think that pumped us up. We came out a lot better and we love to play at home, so that was nice to see some people out here.”

Collegian soccer reporter Chad Deutschman can be reached by email at sports@collegian.com or on Twitter @ChadDeutschman.