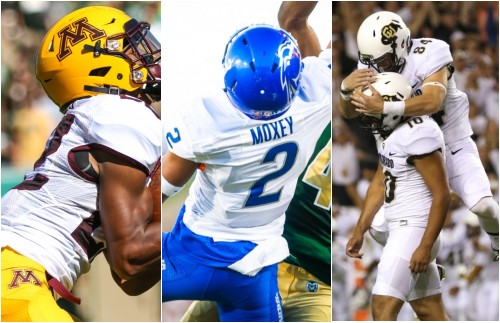 Just over halfway through the college football season, the Rams have a bye week, which makes this the perfect time to rank the uniforms of every 2015 CSU opponent to date.

Note: Most of the photos in this post were taken by Abbie Parr. Because the Collegian could not send a photographer to San Antonio, Texas for the UTSA game, please follow the link under UTSA to a photo gallery by Jeff Huehn with great photos of the Roadrunners uniforms from the meeting with the Rams.

There’s nothing wrong with these uniforms per se, but they were just a little bit… well… they were just boring. The blue bolt on the white helmet is nice, but the gray pants with the blue and white stripe is just so plain, and the numbering and lettering was kind of generic.

Props to this Division I-AA school simply for not ranking dead last amongst a pool of FBS teams. The pattern along the sides and shoulders is a little busy, but the blue was just light enough to keep it from distracting. The zig-zagging stripe over the top of the helmet is a cool detail as well.

Adidas strikes again with the weird chest pattern. Other than that, the lettering is solid, numbering is nice and the helmets are pretty clean. But, there is just not a whole lot you can do with that color combination. These looked like a poor man’s version of the Chicago Bears’ uniforms.

Maybe it’s unfair not to rank a nice, classic looking combo higher, but Minnesota’s yellow just doesn’t do much. Nice incorporation of the Gophers’ “Ski-U-Mah” slogan along the top of the helmet.

It’s hard to go wrong with the white-on-white look. However, another CSU opponent did it slightly better…

CU’s stormtrooper uniforms from the Rocky Mountain Showdown were pristine. Even CSU fans can’t deny the aesthetic appeal. And unfortunately, CU quarterback Sefo Liufau didn’t throw any picks against the Rams, so we couldn’t make jokes about him having the accuracy of a stormtrooper as well. It would have been nice if the logos on the helmets were painted on rather than decals though. Nonetheless, a tip of the hat to the Buffs for these bad boys.

It’s Boise State. Did you expect anything less?