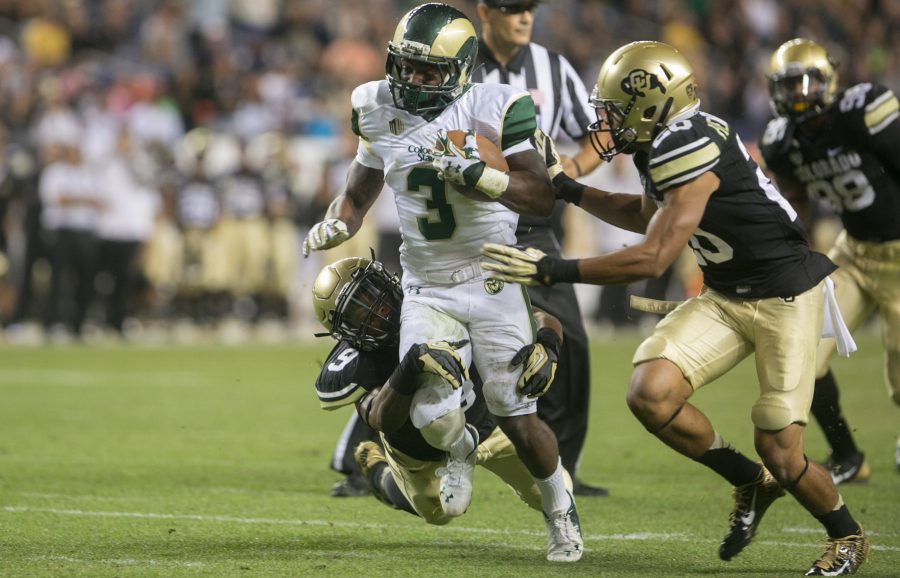 Colorado State running back Treyous Jarrells (3) will need another strong performance Saturday night if the Rams are to upset Boise State. Photo by: Austin Simpson

In its 86-year existence, the Rocky Mountain Showdown between Colorado State and Colorado has seen its fair share of memorable moments. Here’s the Collegian’s top five:

In the last game played in Boulder, CSU upset the Buffs 23-17 behind first-year quarterback Grant Stucker. Colorado State fans rushed Folsom Field. The Rams led 20-3 at halftime, and held off a furious rally by the Cody Hawkins-led Buffs. Maybe the most memorable moment of the night came when Colorado State safety Elijah Blu-Smith crushed CU receiver Scotty McKnight on a crossing route. Furious CU fans thought Blu-Smith should have been ejected, but he wasn’t even flagged on the play.

One of Colorado State’s biggest wins – and most embarrassing moments – came in 1999 when CSU routed CU 41-14 at Mile High Stadium. However, the win was marred by CSU fans reportedly throwing trash and beer bottles at the CU team as they exited the field. Denver police dispersed the crowd by launching tear gas canisters into the crowd at the north end of the stadium.

Colorado State started Jim McElwain’s tenure with a bang, holding off CU 22-17 at Invesco Field at Mile High. McElwain became the first CSU coach to win his CSU debut since Jerry Wampfler in 1970. The CSU defense, who held the Buffs just 245 yards of offense, stopped the Buffs on fourth-and-2 with just under a minute remaining in the fourth quarter to seal the victory.

2. Buffs get run over

The most recent, and most memorable moment for many CSU fans came in the 2014 Rocky Mountain Showdown when Alabama transfer Dee Hart dragged multiple CU defenders into the end zone during the first quarter of CSU’s 31-17 handling of the Buffs. Hart and fellow back Treyous Jarrells became the first CSU duo to each rush for 100 yards in a game since 1996.

Bradlee Van Pelt never hid his disdain for CU. But the former Rams’ quarterback provided one of the lasting images of the rivalry when he escaped for a touchdown run and spiked the ball off CU defensive back Rod Sneed’s helmet as he ran into the end zone. Van Pelt’s helmet spike with 6:20 to play in the fourth quarter gave the Rams’ a 19-14 lead they would never relinquish in their upset of then-No. 7 CU.