No. 9 CSU volleyball rebounds with sweep of Western Michigan 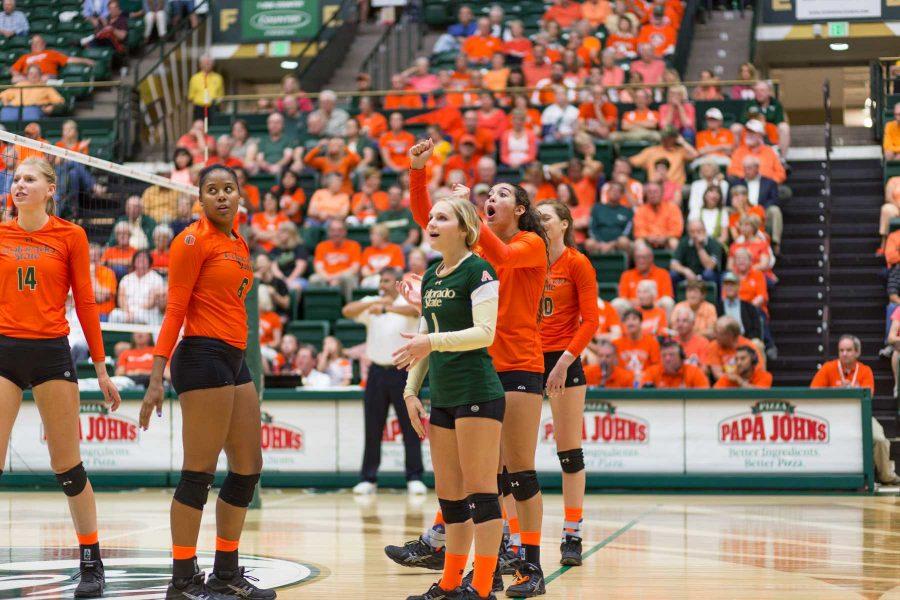 The CSU Women's Volleyball Team waits in anticipation for the ruling on the court at the CSU vs. WSU game. Photo Credit: Ryan Arb

The main focus for CSU was to do a better job of utilizing the 6-2 rotation in order to get the most out of the additional hitter, something head coach Tom Hilbert felt his team did not do in the loss Friday to Arizona State.

“One of the things we wanted to do going into this game was to make our offense more balanced,” Hilbert said. “It had been too left-side oriented. I thought the setters did a great job of doing that.”

The Rams made small progressions in the first two sets against WMU but still had some struggles defensively.

“The frustrating thing to me tonight was I felt like we should have been able to block this team better than we did,” Hilbert said. “And I think we only did it at the last part of the match.”

“If you look at set distribution it was significantly better than it has been,” Hilbert said. “… We needed this kind of a breakout match from both our middles for just our setters really. We needed it for our setters so they can feel comfortable going to everybody.”

Adrianna Culbert, the reigning Mountain West Player of the Week, led the Rams with 16 kills.

“I think when we were out of system a lot, we were getting a lot hard swings and there were only two balls that we had to end up free-balling over which is great to know that we’re putting the opponents in a hard situation,” Culbert said.

For Culbert, who is from Delton, Michigan, it was also a chance to play against some familiar faces. WMU’s Sierra Hubbard-Neil played with her on a club team, and two of WMU’s assistant coaches had coached her in the past as well.

“It wasn’t any different from playing any other opponent,” Culbert said. “But after the game and stuff and before the game it was awesome to just see everyone, because I really don’t play anyone from around where I’m from.”

With the Rams slowly getting more comfortable in the 6-2 rotation, middle blocker Acacia Andrews was able to have more of an impact. She finished the match with 12 kills.

“I think we definitely have been working on set location and we call it driving toward the ball,” Andrews said. “That’s been a big emphasis in practice, and so I think we just implemented it into the game, and so I think a lot of us were driving really well.”

The Rams had an opportunity to redeem themselves just a day after being swept on their home court, and that is exactly what they did against WMU.

Up next for the Rams is a match against in-state rival University of Northern Colorado to cap off the CSU/UNC Tournament Tuesday at 7 p.m. at Moby Arena.