No. 9 CSU volleyball swept by No. 15 Arizona State in first loss 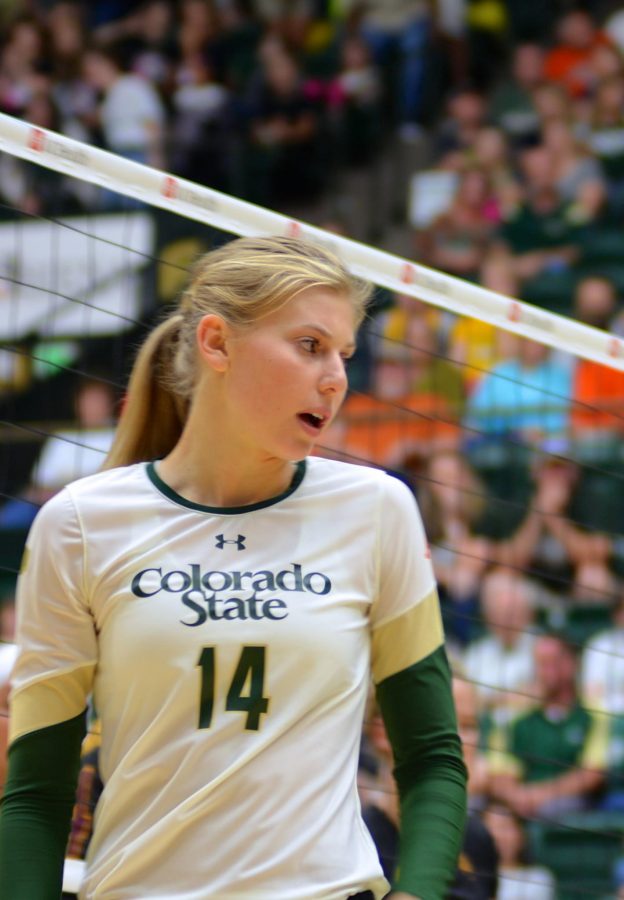 The Sun Devils were out for revenge against the Rams.

The No. 9 Colorado State volleyball team (3-1) headed into the CSU/UNC tournament with a perfect record but it would not stay that way. No. 15 Arizona State (4-0) swept the Rams by scores of 25-17, 25-21 and 24-20 Friday night at Moby Arena, getting some retribution after losing at home to CSU last season.

The teams were not that uneven in the major statistical categories – the Rams finished 37 kills and 10 blocks to the Sun Devils’ 39 kills and 10 blocks. But CSU’s 24 errors, 14 of which were unforced, would ultimately be the Rams’ downfall.

CSU head coach Tom Hilbert said that the team still has some kinks to work out in adapting to the 6-2 rotation.

“We’re running the 6-2 for a reason and that’s the added hitter and we’re not using them,” Hilbert said. “… That was a high-level team that we were playing. They didn’t make a whole lot of mistakes. They forced us to play and we didn’t disrupt them enough nor did we get enough done. We made too many mistakes.”

Adrianna Culbert agreed that while the 6-2 is the correct system, the team is still adjusting.

“I think a lot has to do with chemistry between each other,” Culbert said. “Just getting in sync with each other.”

ASU did not play a powerful game against CSU, but rather a mature and a strategically thought out game.

“(ASU was) good defensively,” Hilbert said. “I was impressed. They passed better than I expected them too… Half of their middles kills were on tips and jump balls after the first two sets. And that’s a result of no effort by us and them making smart plays.”

Culbert added that the step up in competition compared to CSU’s opponents in the Rams Volleyball Classic was a major challenge.

“Arizona State is just a much higher caliber team than what we played last weekend,” Culbert said. “I think it just shows how much better we can get and how good they are and where we can be. Because I think we all can agree that we could definitely play with them without a doubt.”

CSU had the majority of their errors during the first two sets, but in the third set the Rams finally got some swings in against the Sun Devils.

“I do think that we got the balls to the middles better and they were more effective,” Hilbert said.

“I feel that (ASU was) always pushing us and there were times that we were pushing back absolutely and we played really great,” Culbert added. “That was when we stayed with them, but then they would push back.”

For senior transfer Alex Reid, experiencing her first loss as a Ram was a learning experience.

“The biggest thing we are going to learn from this game is not waiting for the other team to throw the first punch,” Reid said. “I think that we are kind of just very tentative and we were waiting to see what they were going to do before we decided to do something about it. It wasn’t until we were trailing a lot that we started to get aggressive or until the third set that we really started to get into it. I think that going into our next matches we have to come out throwing that first punch, being aggressive, and taking risks from the beginning.”

After sweeping their first three matches, the Rams were in an unfamiliar position against the Sun Devils after dropping the first two sets.

“Getting a sweep last weekend, we haven’t been in that position,” Reid said. “Instead of looking at it as like we’re down two sets, we have to take a step back. We have to challenge them to be better.”

To Hilbert, the difference was aggressiveness.

“We have to learn to be more aggressive,” Hilbert said. “I think we’re going to have to play with a little better more faster tempo. I think we’re going to have to learn to really get after people serving and I know we can. And we have to do it when we’re two, three or four points behind. Because we haven’t faced it that much, we aren’t great at it.”