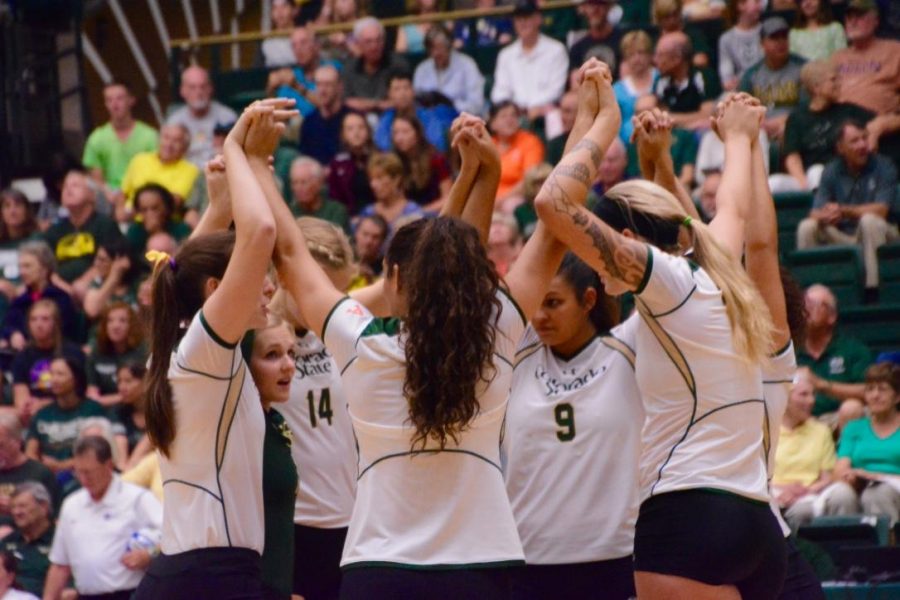 The No.12 CSU volleyball team swept UC Davis and Northern Iowa in three sets each Saturday. (Photo by Megan Fischer)

The No. 9 Colorado State volleyball team’s schedule picks back up against No. 15 Arizona State (3-0) at 7 p.m. Friday at Moby Arena in the first game of the CSU/UNC Tournament.

After running the table in the Rams Volleyball Classic with sweeps of Baylor, UC Davis and Northern Iowa to kick off the season, the Rams (3-0) are looking to solidify their spot in the top 10.

CSU will be back in Moby at 7:30 p.m. Saturday to wrap up its weekend with a match against Western Michigan. In celebration of Ag Day, the game will be an “Orange Out.”

Western Michigan and ASU will play a match earlier in the day at 11 a.m. The CSU/UNC Tournament comes to a close at 7 p.m. Tuesday when Colorado State hosts in-state rival, Northern Colorado.

Head Coach Tom Hilbert spoke about the team’s performance this past weekend and gave some insight on where the focus has been in practice this week.

“We went 9-0 in sets this weekend and I was not pleased offensively with where we’re at,” Hilbert said. “… We can improve in kill percentage, and we need to improve.”

Senior hitter Adrianna Culbert, who was named Mountain West Player of the Week and the MVP of the Rams Volleyball Classic, elaborated on what the team can work on.

“We’re just focusing on the things we need to get better at: our out-of-system setting, out-of-system hitting and just becoming more of a team,” Culbert said.

Last year, the Rams defeated the Sun Devils in a five-set thriller in Tempe, Arizona. Whether or not this year’s meeting will be as tightly contested, it should provide some entertaining action no matter what.

“ASU will be a great game,” Culbert said. “We just have to focus on our scouting report and doing every little thing that we can to make sure that we’re coming out ahead.”

Hilbert explained that he likes to remind his team to cherish the moment and enjoy the opportunity to play another high-level school such as ASU.

“These are the fun ones,” Hilbert said. “You get to go out against the best of the United States and see how you stack up.”

Although these games may be entertaining and exciting to fans, they really are a chance for CSU’s team to see where they stand among other volleyball powerhouses.

“That’s what they are – they’re a measuring stick,” Hilbert said. “If you win, then they help you get into the NCAA Tournament. But even if you don’t win, they still help you understand how good you are.”

After the weekend, the Rams will finish up the tournament with a match against one of their local rivals, the UNC Bears. Although in the past CSU has swept UNC, this year could pose more of a challenge.

“I think we feel confident, but we also know UNC has gotten a lot better,” Culbert said. “It always is a competition with them because they see us as a rival and they are going to bring their best game, so that means we have to be on our toes too.”