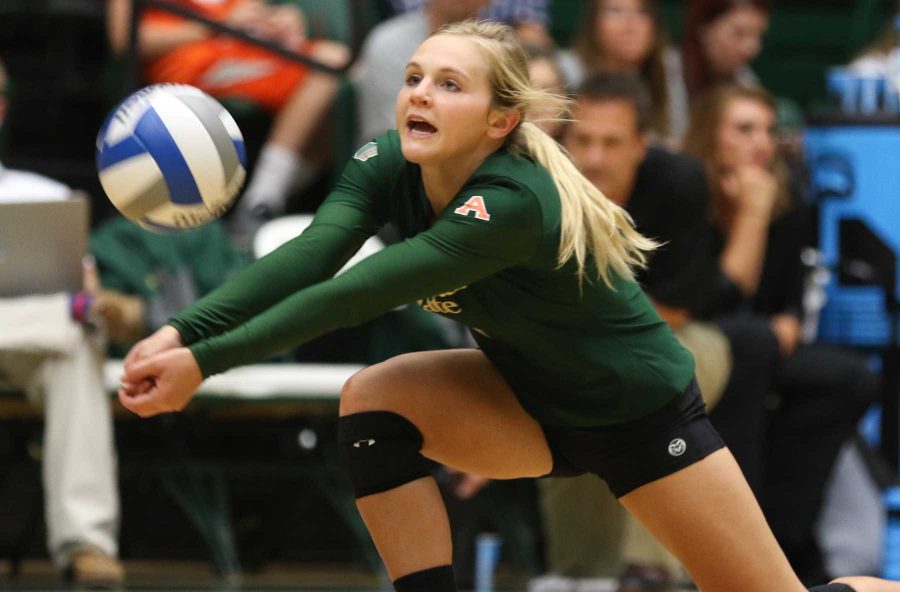 The Rams battled in each set but they could never gain an edge on the Longhorns, much like their match in the 2014 NCAA Tournament.

“My initial thoughts are we did grow playing the team today,” CSU head coach Tom Hilbert said. “I’m very pleased with some of the things that we did, and I think it shows our team that we can be successful offensively against teams like this. … I mean, this is a great team.”

“We couldn’t block the way that we need to be able to block in order to beat a team like this,” Hilbert said. “It’s very simple, you can’t just let them swing away. A lot of it is they’re very athletic, and they’re going to get past a lot of people. But some of it is we’re not fundamentally doing the right things blocking and we need to improve.”

The second set is when the Longhorns really began to establish an upper hand. The Rams never led in set two, and their struggles continued into the third.

Texas’ offense was too much for CSU to handle Sunday though.

“Their players are just so good that if you take one thing away they do something else, and that becomes frustrating,” Hilbert said.

Texas’ Paulina Cerame led the Longhorns with a match-high 14 kills. Sophomore Amy Neal also gave the Rams trouble, as they had trouble handing her serves. She finished with five aces to go along with her nine kills.

“Texas is talented in every position,” Hilbert said. “They put a ton of pressure on us, and I’d like to play another match against these guys because I think we would just simply get better and better each time we played them.”

Texas’ outside hitters made caught the Rams a bit off guard defensively.

“I think that their outside hitters played a little differently than we had scouted them to play,” Coach Hilbert explained. “And then we expected their set distribution to be a certain thing, and the minute we showed that we were stopping that they went other places. … They did what good teams do, they made adjustments.”

CSU stays on the road for their next game Tuesday at 5:30 p.m. against No. 25 Texas A&M in College Station, Texas.

“All of our preparations roll around blocking,” Hilbert said. “… So that’s what we will do (Monday).”