Joe Hansley: Not the prototypical receiver 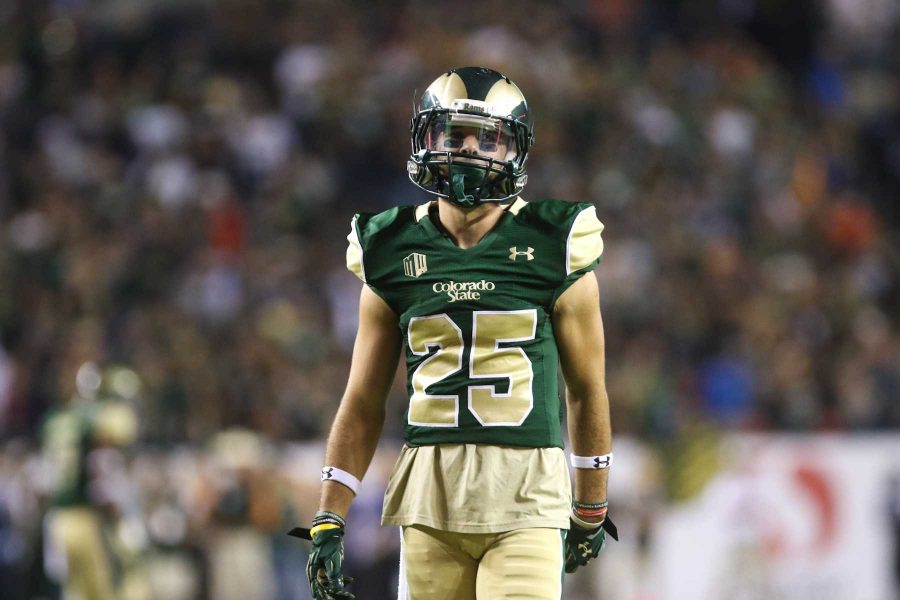 How many children grow up tossing a football around in the backyard, dreaming about playing college football or even one day getting a shot to play in the NFL?

Only 6.5 percent of the approximately one million kids playing high school football in 2015 will go on to play at the NCAA level. Making the cut at that low of a percentage is seemingly impossible for many high school athletes.

The dream dies for most in high school – but not for CSU senior wide receiver Joe Hansley. He might not look the part compared to his counterparts in Colorado State’s receiving corp, such as Rashard Higgins. But simply put, Hansley has always had a knack for making big plays when he gets the ball in his hands.

After growing up with the sport, he went on to become the star of the Highlands Ranch Falcons in high school. In 2011, he was selected as the Gatorade and Scout.com Player of the Year in the state of Colorado and earned all-conference honors as a running back, defensive back and returner on special teams.

Hansley had a shot indeed, and was able to continue that production for the Rams as a freshman, even scoring a touchdown in his first game against the in-state rival Colorado Buffaloes.

“That was something else,” Hansley said. “That was a pretty cool experience. To be honest I didn’t think I would play as a freshman, so that helped me getting my feet wet at a young age.”

Hansley has been able to continue his production to this point in his career. He has become a leader on the team and has 118 receptions for 1,576 yards and eight touchdowns in his career for the Rams.

“Joe is just another very valuable weapon that we have,” senior offensive lineman Sam Carlson said. “He’s another guy we can get the ball to. He’s a senior so he obviously brings another leadership role to the team, not so much as a vocal guy but a guy that leads by example, he couldn’t be more valuable to this team.”

Many CSU players who were popular with former coach Jim McElwain have had to prove themselves all over again with the new coaching regime. But it didn’t take long for the new Rams head coach Mike Bobo to take notice of Hansley’s value.

“25 has done some nice things,” Bobo said, referring to Hansley by the number on his jersey. “Joe is a guy that can play a lot of positions – he can catch the ball in a crowd, he does a nice job of route running. He’s not the biggest guy, he’s not the fastest guy, but he has great hands.”

The 5-foot-10, 180-pound receiver has become accustomed to not being one of the bigger players on the field.

“I really just think it’s instinct – you just learn to play with your size,” Hansley said. “For me, as a player, it’s imperative that I run good routes. I’ve said it before, I’m not the fastest or biggest guy so the only way for me to get open is to run good routes.”

“He never moves his body when he is breaking inside or outside, so he doesn’t give away his routes,” Bobo said. “That’s probably the number one thing he does well, and I know he’s practicing hard to hopefully help this team win on Saturday.”

Through three games this season, Hansley has had 10 receptions for 149 yards and two touchdowns. He and the rest of the the team are focusing on putting back-to-back overtime losses behind them to get back on track with a win Saturday against UTSA.

Every game this season is huge for CSU, but also for Hansley if he wants to keep his dream alive of playing at the next level.

“I think this year for me is a big year and it will be a big tell of whether I have a shot or not, but I definitely do have aspirations to play at the next level,” Hansley said.

Only 1.6 percent of the 71,291 football players in the NCAA will go on to play in the NFL. Hanlsey has beaten the odds once before, but this time around will be much tougher.

No matter what the future holds for Hansley, he will always be able to hang his hat on the fact that he has had a successful and entertaining career with the Rams since day one.

“I had expectations that I’d be able to play at this level and produce,” Hansley said. “But to be honest I’ve been blessed to have had the opportunities I’ve had since I’ve been here.”