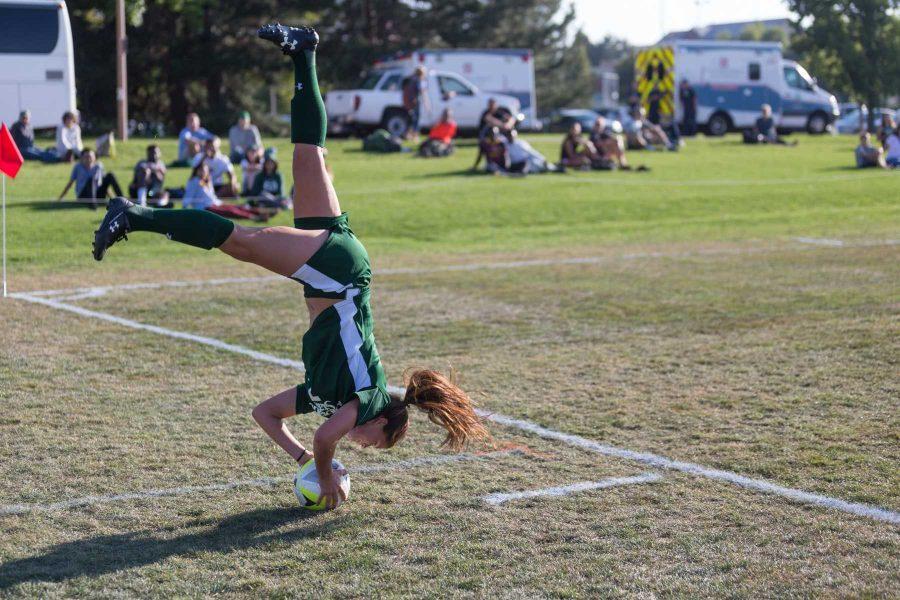 A win against a Big-10 opponent such as Northwestern would have been huge for CSU. But for the fourth game in a row, the Rams would drop the game by one goal.

“I think we are the try hard team of the year,” CSU coach Bill Hempen said. “You look at it and there is not a kid out there that’s loafing. They are all trying. We are at a point in the season where we’ve really got to find out what our rotations are gonna be. … We will go back to the drawing board tomorrow.”

This loss may sting a bit more for the Rams. It was the first loss in which they held a lead at one point.

Freshman Hannah Gerdin would come off the bench in the second half to score for the Rams off of an assist from Madisann Relph. In the 60th minute Gerdin dribbled past two Northwestern defenders and booted a ball past the keeper from about 30 yards out for her second goal of the year to give the Rams a 1­-0 lead.

“I saw space and an open net,” Gerdin said. “And the goalie was out of position so I just put my head down and shot it.”

The lead would be short lived though as Northwestern was granted a penalty kick in the 63rd minute. Maria Grygleski would take the kick for the Wildcats, sending the ball low and right, out of reach for Rams’ keeper Jesse McGinley to tie the game 1-­1.

“I was proud of our response,” Northwestern coach Michael Moynihan said. “We took the kickoff and went right back at them, and found a way to get a goal.”

The Wildcats would take the lead not long after that. Kourtney Scott finished off a run for Northwestern with a sliding shot that found the back of the net, putting the Wildcats up 2­-1 in the 76th minute.

The Rams would get one final chance in the 85th on a rush led by junior Bethany Stivers and senior Gianna Bertana, but could not finish it off. The game would come to a close with the Wildcats holding on for the 2-­1 win.

The game would come and go but not without some fireworks. Moynihan would storm the field at half, complaining about a call he felt was missed by the officials. Moynihan was escorted back to the bench. He later received a yellow card in the match.

“I am glad nobody got hurt,” Moynihan said.

The loss marks four in a row for the Rams, all by just one goal.

CSU is in action again on Sunday, and senior Megan Speed knows what it will take to get back on the winning side of things.

“We just need to work on the things coach has been telling us during practice all week, and pregame stuff, we have been executing on the field but getting unlucky,” Speed said. “We’ve had some goals which have been good but we just need to be a little more stable with our defense and working as a team.”

The Rams are back in action Sunday in Greeley to take on Northern Colorado at 1 p.m.

Collegian Soccer Reporter Chad Deutschman can be reached by email at sports@collegian.com or on Twitter at @ChadDeutschman.