CSU vs. Minnesota to honor veterans with Military Appreciation Day 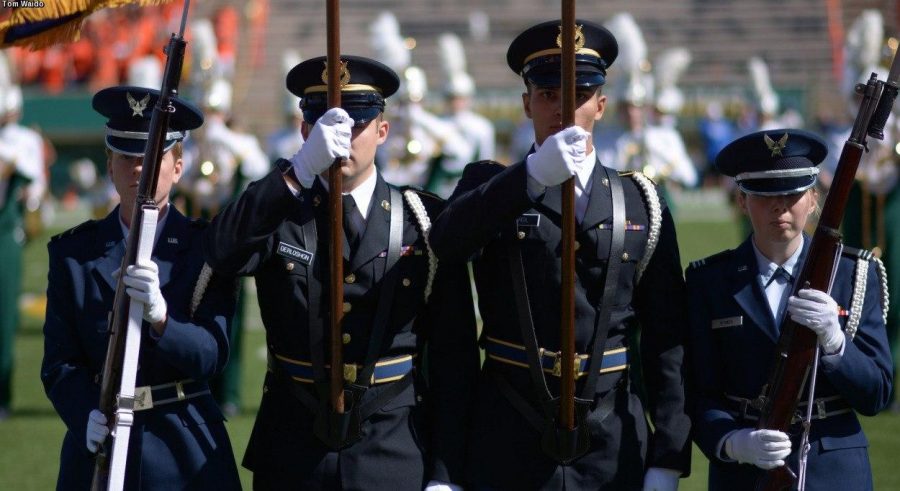 In 1943 and 1944, many universities across the country chose to suspend their football programs.

The Colorado A&M Aggies – now the Colorado State Rams – was among the schools not to field teams those seasons due to World War II.

But after the war, a large number of men returned to continue their education and to play football, thus reinvigorating the program. The 1948 CSU media guide listed 18 war veterans from the Army or Army Air Corps (the Air Force had not been established), 12 from the Navy and five from the Marines, according to CSU Athletics.

CSU will recognize those currently and formerly serving in the U.S. Armed Forces with Military Appreciation Day during the CSU vs. Minnesota football game Saturday at Hughes Stadium.

Before the game, the Army ROTC Color Guard will lead the Ram Walk, an event which allows fans to welcome the team on the south side of the stadium about two hours prior to kickoff. At some point during the game, all current and former military members in attendance will be asked to stand to be recognized.

Mosley, a member of the elite Tuskegee Airmen, passed away in May at age 93. When he began attending CSU, still known then as Colorado State College of Agriculture & Mechanic Arts, he was one of only nine black students at the school.

At the time Mosley decided to play for the football team, every member of the Hughes-coached Aggies was white. Mosley made the varsity team as a fullback in 1940, becoming the first black football player at CSU and in the Mountain States Conference since the 1905 and 1906 seasons.

After graduating in 1943, he became a member of the famed Tuskegee Airmen. He went on to be one of the first black pilots to fly bombers in combat during both the Korean and Vietnam Wars before retiring from his prestigious career in 1970.

Before passing away in May, Mosley had been inducted into the Colorado Sports Hall of Fame in 2009. In 2011, CSU established the Lt. Col. John Mosley Student-Athlete Mentoring Program to assist CSU student-athletes.

Walt, a graduate of Fort Collins High School, played on the offensive and defensive lines at CSU. He was a member of Harry Hughes’ last two Rocky Mountain Athletic Conference championship teams in 1933 and 1934. He played three years of football for the Aggies and was a co-captain in 1935.

After graduating in 1936, Walt joined the U.S. Marines where he quickly rose through the ranks. He earned a Purple Heart, the Silver Star and two Navy Crosses (the second highest award in the U.S. Military after the Medal of Honor).

Mosley and Walt will be represented by their families Saturday.