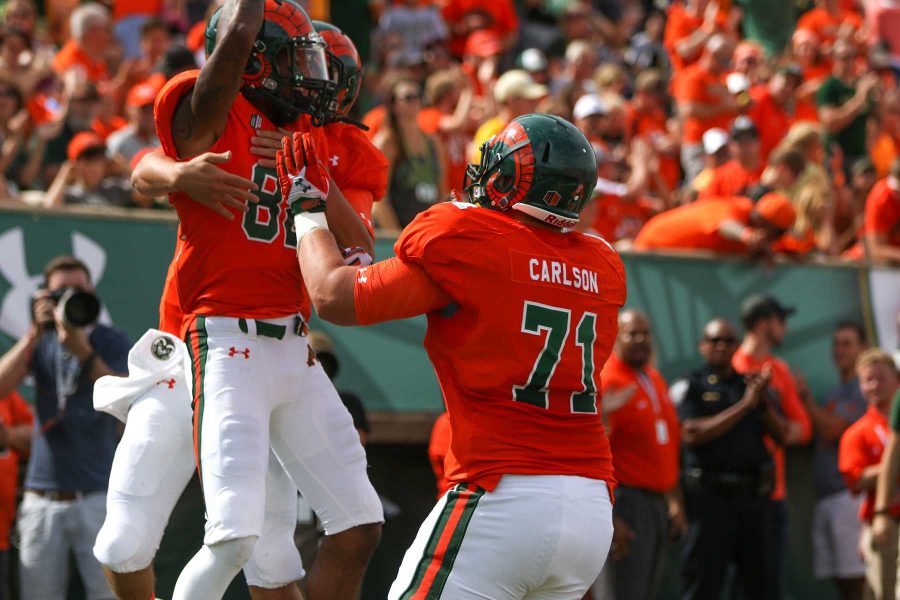 Colorado State (1-0, 0-0 MW) opened up the season with a confidence boosting 65-13 win over Savannah State, but this weekend’s matchup against Minnesota (0-1, 0-0 MW) will prove to be the first formidable test for the Rams.

The game kicks off Saturday at 1:30 p.m. on Military Appreciation Day at Hughes Stadium in Fort Collins and can be seen on CBS Sports Network. Minnesota comes into the game 10-3 all-time against current Mountain West teams and 2-0 against the Rams.

“Personally, it is a big game,” CSU head coach Mike Bobo said. “You’ve got a Power 5 team coming to your home stadium, playing in front of your home people. You want to play well.”

Despite recognizing the significance in Saturday’s game and how it stands out on the schedule, Bobo will not deviate from the message he delivers to his team every week.

“It doesn’t matter whether it’s Minnesota this week, and like I told the players it could be the Denver Broncos, we got to have the same plan and the same process of trying to get better everyday,” Bobo said.

He has his team focused on getting better each day but also knows he will have to emphasize physicality and intensity if the team wants to take home a victory on Saturday.

“What we’re going to have to get in our kid’s minds this week is that it truly is going to be a fight,” Bobo said. “A sixty minute fight, sixty minutes of giving it everything we’ve got every snap.”

One player who noticed the jump in physicality and intensity in Tuesday’s practice is sophomore linebacker Kiel Robinson.

“It was intense preparing for Minnesota, probably one of the best teams we have seen on film so far,” Robinson said. “We’re trying to have the most physical and intense practices this week just to get prepared for them.”

Minnesota head coach Jerry Kill and the Golden Gophers have a run game that Bobo knows will test the grit of his defense come Saturday.

The Rams’ defense provided plenty of reason in last week’s game to believe they can be counted on again, although it came against an outmanned Savannah State offense. CSU’s defense will have its hands full this week,

“From first quarter to the fourth quarter, I mean sometimes there were balls on the perimeter where we had nine, ten hats defensively around the football which was good to see,” Bobo said. “… No matter who got on the field guys were playing extremely hard and were playing together.”

Playing together, as Bobo highlighted, may be the key to the defense getting the job done.

“Everyone on defense is pretty close, when someone makes a play it feels like you made the play, everyone gets excited for each other,” senior defensive lineman Joe Kawulok said.

The offense has its work cut out as well. Minnesota’s defense held No. 2 TCU to 23 points in a game that the Golden Gophers had an opportunity to steal in the fourth quarter.

After being named Mountain West Offensive Player of the Week in his starting debut, sophomore quarterback Nick Stevens will have a much bigger challenge this week against a talented secondary and pass rush.

“Defensively, (their) secondary jumps out at me big time,” Bobo said. “… They don’t miss tackles. When they tackle they wrap up … They’re going to attack you. They’re downhill at linebacker and even at safety.”

Stevens started the season by completing 20 of his 28 passing attempts for 289 yards for five touchdown, impressing his coach in the process.

“(He) hit the check down a couple times, which was nice to see,” Bobo said. “The opening drive of the second half, we called a four vertical play and they did a good job of getting back, and he hit (Jasen) Oden on the check-down for 12 yards, got the drive going and we went down and scored.”

Saturday’s game presents an opportunity for Bobo and the Rams to get a win over a Power-5 team for the fourth consecutive season, and they will take all of the support they can get.

“I saw a picture today of the crowd before (last week’s) game and I thought it was awesome – all the orange – and hopefully we can fill up the whole stadium this game and not have any bleachers open,” Bobo said.

Collegian Football Reporter Geoff Huebner can be reached at Sports@collegian.com or on Twitter @Huebnermedia93