CSU defense will be deciding factor in Minnesota game 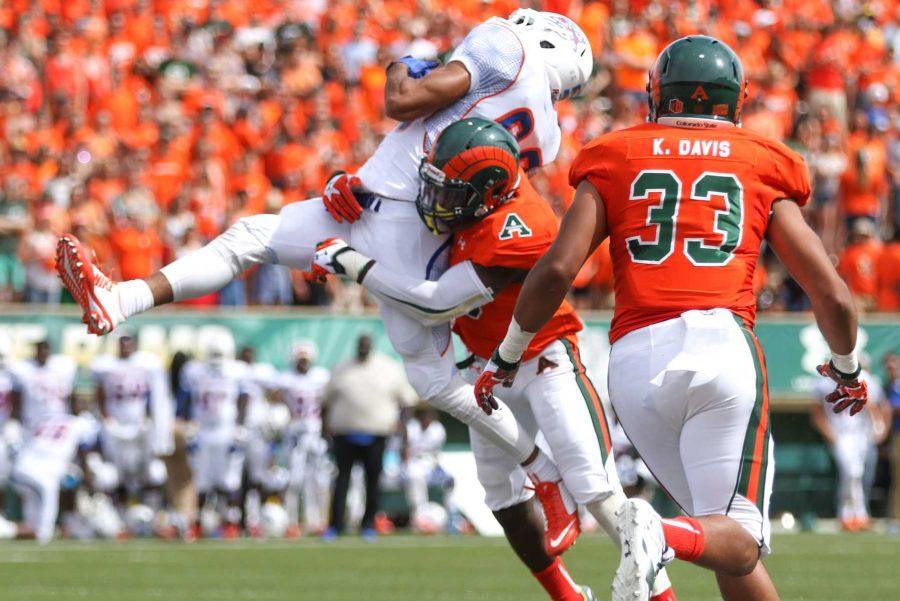 The Golden Gophers bring a diverse and powerful offense with them to Fort Collins this weekend.

Since head coach Jerry Kill’s tenure started with Minnesota in 2011, the Gophers have increased (or maintained) their rushing production every season. This year, the apparent tandem between senior Rodrick Williams and redshirt freshman Rodney Smith hope to help continue that trend.

Against TCU, the two combined to rush for over 120 yards on 25 total carries, including a touchdown by Smith. The power run game is not always pretty but it can wear on a defense over the course of a game.

CSU’s defense will have their hands full against the backfield pair, but they are not the only two players that the defense has to worry about on the ground Saturday.

“They have a big quarterback that can run,” CSU head coach Mike Bobo said. “Watched their spring game on the Big 10 Network and he had a scramble and just outran everybody on their defense, so he’s big and strong and fast.”

Bobo is spot on in referring to junior quarterback Mitch Leidner. In 23 career games, the six-foot-four, 237-pound Minnesota native has rushed for 17 touchdowns to go along with 2,614 career passing yards and 15 touchdowns through the air.

Under Kill, the Gophers are 18-3 when rushing for 200-plus yards as a team and 18-6 when they have an individual 100-yard rusher. The Rams will need to key in on the run this Saturday.

“At some point during that ball game Minnesota is going to line up and say we’re going to see if you can stop the run, so it will be a big test this week,” Bobo said during Monday’s press conference.

Minus the one 63-yard touchdown run last Saturday against Savannah State, which came with the game already in hand, the Rams defense showed they are no joke defensively either.

“(The) defensive front I thought played very well,” Bobo said. “They were attacking and playing fast and running to the football.”

Junior linebacker Kevin Davis was also happy with how the front-seven played.

“I think (defensive line) played awesome,” Davis said. “As far as the run game, it was hard to get in on a tackle because they were making plays, and in the pass game you turn around and they’re sacking the quarterback a bunch of times.”

Davis appears to be ready for the Gophers’ physicality. The six-foot-three, 240-pound Fountain, Colorado native is ready for the challenge mentally as well.

“It’s exciting, it’s another opportunity for us to show how good we are and we definitely respect them as a team,” Davis said. “They played very good against TCU the other night so we are excited … We’re very good as a linebacking corp, but then again the D-line was making plays, the safety’s were down making plays too.”

Senior defensive lineman Joe Kawulok is a member of the defensive front that received high praise from Bobo and Davis. He is zoned in on stopping the Power 5 opponent stepping into Hughes.

“I do think we’re ready, it’s just on the preparation now,” Kawulok said. “Just getting lined up, running the calls, communicating. I thought that we did a pretty good job up front last week and hopefully that will carry over into this week.”

The communication that Kawulok mentioned has been a focus all week for the defense, and will be a point of emphasis Saturday.

“The talking between linebackers to the front, from safety to linebacker, that’s part of the test and taking steps forward is going to give us confidence that were going to be able to communicate in the next game,” Bobo said.

Between a diverse run game and a quarterback that can do damage on the ground or through the air, the Rams will be tested in plenty of areas this weekend. But that is what Bobo is looking forward to most, especially after opening the season against an FCS team.

“You’re always looking for a test, to get tested and strained, put through some adversity,” Bobo said. “… We’re going to get tested this week. It’s going to be a fight, so I’m interested to see how our guys respond. I believe we’re going to respond well.”

Collegian Football Reporter Geoff Huebner can be reached at Sports@collegian.com and on Twitter @Huebnermedia93.