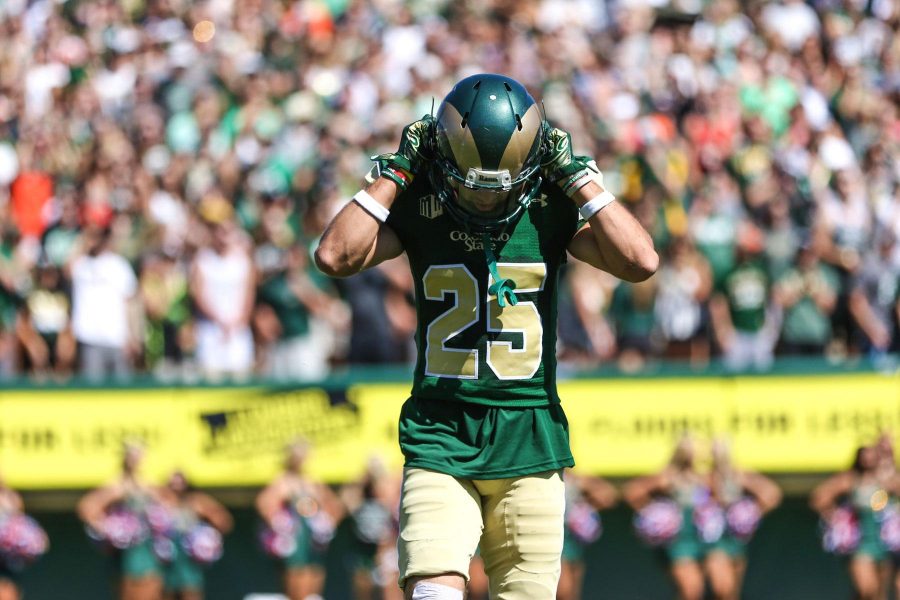 For the second week in a row, Colorado State struggled with turnovers. This time, though, it came back to bite them.

After a fumble by CSU sophomore running back Dalyn Dawkins on the first play of overtime, Minnesota kicker Ryan Santoso connected on an 18-yard field goal to lift the Golden Gophers over Colorado State 23-20 Saturday afternoon in front of a capacity crowd of 32,500 at Hughes Stadium.

In a game full of momentum swings, it was Minnesota who came up with the final two big plays it needed after CSU redshirt freshman kicker Wyatt Bryan sent the game into overtime with a 37-yard field goal.

In the first play of overtime, Minnesota linebacker Cody Poock jarred the ball loose from Dawkins on a dump-off pass from Coleman Key and defensive end Scott Ekpe recovered. The Gophers handed the ball off to running back Rodney Smith five times in a row before bringing Santoso on for the chip shot.

“Well, we won the toss, went on defense got the fumble and we have a great field goal kicker,” Minnesota head coach Jerry Kill said. “We decided to run it and we told them to take care of the ball and get it into the middle of the field … then we got down to the 4-yard line and we decided to go on third down thinking that if there was a bad snap we could take a knee and re-kick it. I felt like that was just the smart thing to do.”

The game was dominated by two swarming defenses for the most part, but it was missed opportunities by CSU’s offense that ultimately cost the Rams a shot to beat a Power 5 conference team for the fourth straight season. CSU had a chance to extend their lead to 10 points and inevitably put the game out of reach early in the fourth quarter when receiver Joe Hansley broke open on a crossing route, but Key lofted the ball just over his outstretched fingertips. Four plays later, the Rams were forced to punt, and they never threatened the Gophers’ defense again until the final drive of regulation.

“We had opportunities down the field,” CSU head coach Mike Bobo said. “There were like three or four times guys were running around wide open and we missed them. When we have a chance to make a play we’ve got to make it, and we made none of them.”

With 3:11 to play, the Gophers took over on their own 20, and quarterback Mitch Leidner manufactured a 12-play, 80-yard drive in a little over two minutes that was punctuated with a 22-yard touchdown pass to senior wide receiver KJ Maye in the corner of the end zone. The extra point by Santoso gave the Gophers a three-point lead with just 55 seconds to play. For the game, Leidner finished just 23 of 45, but completed crucial passes for touchdowns despite often missing open receivers.

After replacing starting quarterback Nick Stevens with four minutes to play in the third quarter, Key led the Rams for the entire fourth quarter, including the final drive of regulation. Following two incomplete passes, Key hit Joe Hansley for 10 yards on fourth-and-8 to keep the drive alive. A costly pass interference penalty on the Gophers moved CSU into UM territory, and Key found tight end Steven Walker wide open for a 23-yard gain the next play. That set up Bryan’s kick, which was just the third made field goal of his career.

It wouldn’t be enough though, as Minnesota’s defense capitalized on its final chance to shut down the Rams’ offense.

“We had some great schemes in for this game, and we just missed on a couple big plays,” Hansley said. “But we have to get it corrected and move on.”

The Rams return to action next Saturday when they take on in-state rival Colorado (1-1) at Sports Authority Field at Mile High in the annual Rocky Mountain Showdown. The game is set for 5 p.m. and will be aired on CBS Sports Network.

CSU head coach Mike Bobo said after the game that when the team resumes practice Monday, Nick Stevens will still be listed as the starting quarterback despite his struggles Saturday.

“Right now when we start practice Monday Nick will like up with the No. 1’s, but Coleman’s got to get ready like he’s playing as well. I don’t want to sit here and say there is a quarterback controversy, because both guys missed guys that were wide open.”

Hollywood watches from the bench

Consensus All-American wide receiver Rashard Higgins missed Saturday’s game with an ankle sprain he suffered during last week’s 65-13 rout of Savannah State. The junior from Mesquite, Texas, who hauled in nine catches for 84 yards and touchdown last week will receive treatment on Sunday and be re-evaluated, according to Bobo.

CSU couldn’t get out of its own way Saturday, amassing 10 penalties for 86 yards, including three personal foul hands-to-the-face penalties by offensive linemen Fred Zerblis and Sam Carlson. During the first quarter, Zerblis and Carlson’s penalties came on back-to-back plays, putting the Rams in a first-and-24 hole which would eventually lead to a punt.

Following Dalyn Dawkins’ touchdown in the first quarter, CSU punted six times and fumbled twice on its next eight possessions.