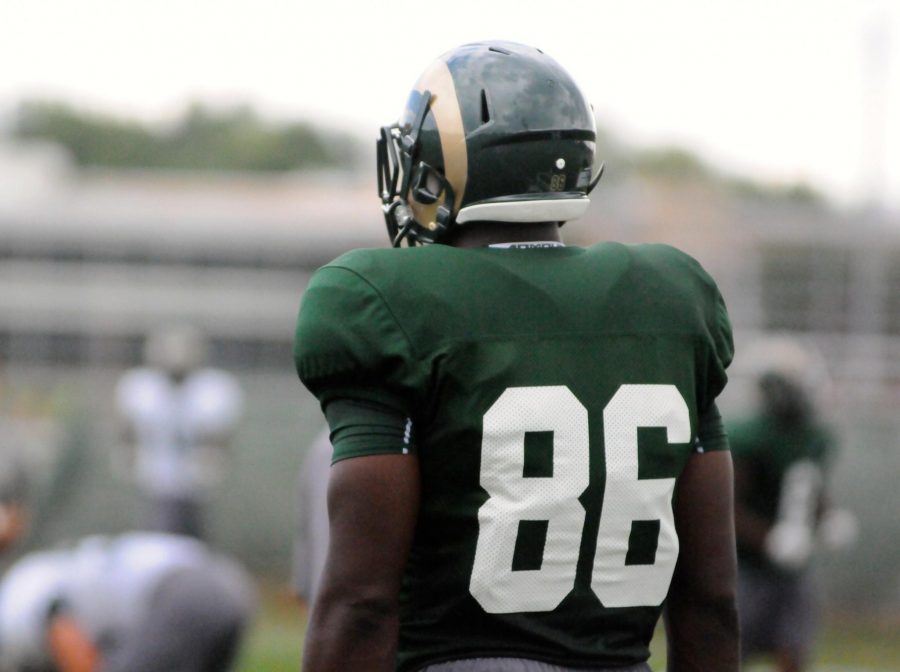 Kivon Cartwright watches from the sideline during Monday's practice. (Photo by Emmett McCarthy)

Kivon Cartwright will admit 2014 was one of the hardest years of his life.

The redshirt senior tight end from Pueblo was expecting his final season at Colorado State to be a memorable one, but then the injury bug hit. He sat out spring practice with a foot injury that required surgery, then returned for fall camp hoping to put it behind him. During that time, Cartwright was named to the preseason All-Mountain West team while also being named to the Mackey Award Watch List as one of the nation’s premier tight ends.

He played in the season opener against Colorado, where he caught one pass for 26 yards before the injury flared back up. As a precaution, Cartwright sat out the next three games and after CSU’s win over Tulsa on Oct. 4, it was announced that Cartwright would miss the entire season after needing another surgery on the injured foot.

His senior season, and possibly his college football career were over.

“The past year has definitely been a learning experience for me, as more than just a football player,” Cartwright said Monday. “I’ve grown in a number of ways.”

What made sitting out even harder was not being able to be on the field to experience the success that CSU had in winning 10 games and making a second-consecutive bowl game. Cartwright badly wanted to be on the field to help his team, but fellow tight end Steven Walker credits him with being a big piece of Walker’s individual success last season, as well as the team’s success as a whole.

“He wasn’t one of those guys who gets hurt and then you never see him again,” Walker said. “Kivon was there at every practice and was just as excited if I scored a touchdown as if he had. He was always amped up for the group and for the team, and he’s the ultimate team player. We’re excited to have him back and he’s getting himself healthy so he can get back out there and get after it.”

According to teammates, there was never any doubt that they would have Cartwright back this season, it was just a matter of waiting to find out whether or not he would be granted a sixth year of eligibility by the NCAA. That news came in early February, when an emotional Cartwright received the medical hardship waiver from the NCAA to be eligible for his sixth season.

“It’s definitely tested my patience,” Cartwright said of the last year and a half dealing with the injury. “I’ve been chomping at the bit to play for so long, and through this year I really got time to work on myself as a person and step back and really trust in my faith because that’s really the only thing I had. But it’s given me a chance to step back and think, ‘Okay, it’s going to work out.’” It also gave me the chance to learn different perspectives, to learn from the coaching side and studying in the film room so I can apply that on the field.”

Through the first six days of fall camp, Cartwright has been limited to individual drills with the team, but has been completely held out of contact drills, including 1-on-1’s and 7-on-7 skeleton work. He is optimistic that he’ll be ready to play by the team’s season opener against Savannah State on Sept. 5, but is taking it day by day as prescribed by the training staff.

Whenever he’s available to play, Cartwright will join an already loaded tight end group that features a 1st team All-Mountain West selection in Walker, as well as returning starter Nolan Peralta and Vanderbilt transfer Mitch Parsons. CSU has also moved linebacker Danny Nwosu to the tight end spot, someone who head coach Mike Bobo has been very high on in the past week of practice. That kind of competition, for a team who primarily will use one tight end in most formations, has brought out the best of the group, according to Peralta.

“On the field it’s a different story than it is when we’re just hanging out with each other,” Peralta said. “We’re all great friends but when we’re out here we know it’s time to work. We support each other on and off the field and we’ll just continue to compete every day and fight for that No. 1 spot.”