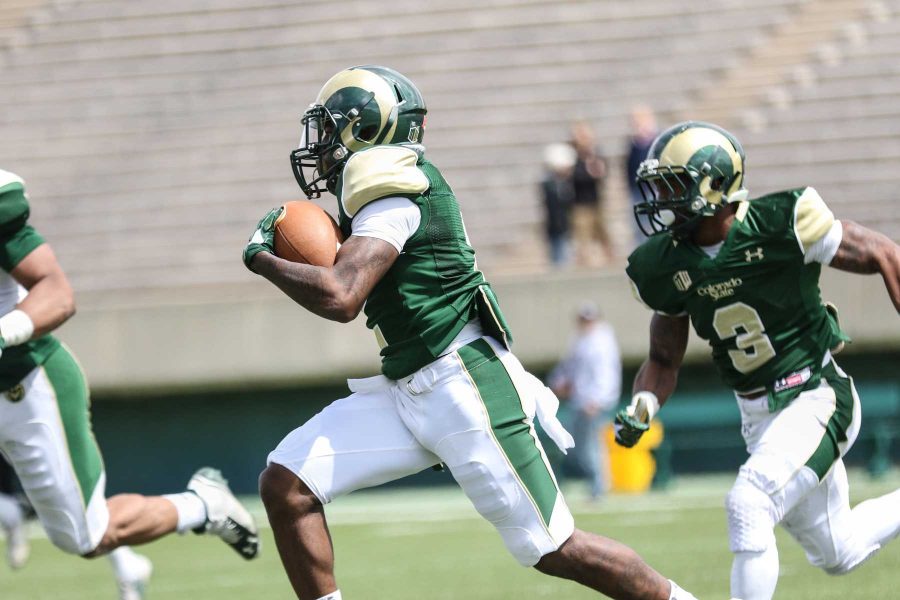 The college football world knows all about Rashard Higgins. The junior wideout from Mesquite, Texas is a returning consensus All-American and the only returning Biletnikoff award finalist from last season. He’s got a Heisman campaign and was recently ranked as one of the top-50 college football players in the country for the 2015 season by ESPN.

But most people, at least nationally, don’t know about the rest of the CSU receiving corps, the self-proclaimed “YAC (Yards After Catch) boys.” [bctt tweet=”Despite most of the attention being given to Higgins, wide receiver might be CSU’s most versatile and deep position on this year’s roster.”]

Joe Hansley, Xavier Williams, Elroy Masters Jr., Deionte Gaines, Robert Ruiz and Cole Anderson, Sammie Long and Jordon Vaden make up the majority of CSU’s depth at the position, one which head coach Mike Bobo believes needs to have at least 7-8 players in rotation for every game.

“I met with the quarterbacks and receivers, and I basically told them that we’ve got depth and we’ve got quality (at this position),” Bobo said after Sunday’s practice. “We’ve probably got greater depth than where I came from (at the University of Georgia), and just as many guys or more than can make plays. I challenged those guys to step up, because everybody’s talking about Rashard, but we’ve got plenty of guys on this team that can play. We want to be fast and play in the no-huddle, so when you do that, you can’t play just three to four receivers the whole game, you’ve got to have seven or eight guys that can play. I believe we’ve got the guys who have the potential to do that, we’re not quite at that number, but we have a chance to get there.”

Outside of Higgins, who pulled in 96 passes for 1,750 yards and 17 touchdowns last year, CSU’s returning wideouts combined for 90 catches, 1,243 yards and six touchdowns. It’s a group that understands how much experience it has coming back, and believes it can be one of the best receiving groups not only in the Mountain West, but in the nation.

“I think this year, the heights we can go to are kind of limitless, because we are so deep,” Hansley said. “When I look at our receiving core, I see eight or nine guys who can potentially play and go out and make plays for us. I have very high expectations for us this year and I think we’ll get it done.”

During the first three days of preseason camp, all of the above players have worked with the first- and second-team offenses, showing glimpses of their playmaking ability. More known for their agility and skills in space, Hansley and Gaines, neither of which stand taller than 5’9, showed no fear going across the middle of the field to catch crossing routes. Meanwhile, Masters and Anderson showed off their length and athleticism pulling down a few nice go routes, and Williams, who stands a legitimate 6’4 and weighs 215 pounds, took a reverse and outran everybody on the field during team drills on Tuesday. Ruiz and Long showed flashes, though consistency will be the key if they are to break into the rotation and see more snaps with the No. 1 offense.

“For us as players, I think we’ve just got to bring it every day, no matter how hard it is,” Masters said. “We’ve got to have guys who can step up and play. Some days, especially during camp, you aren’t going to want to get up and go, but as a group we’ve all got each other’s back. That competition pushes to come out every day and be better.”

The only question remaining around CSU’s passing game is who will get the ball to Higgins and Co., as redshirt sophomore Nick Stevens and redshirt freshman Coleman Key battle for the starting quarterback job. Bobo hopes to name a starter by the end of CSU’s first scrimmage, though he’s been hesitant to put one ahead of the other at this point.

Whoever it is, though, will surely be excited to have this kind of arsenal at his disposal.