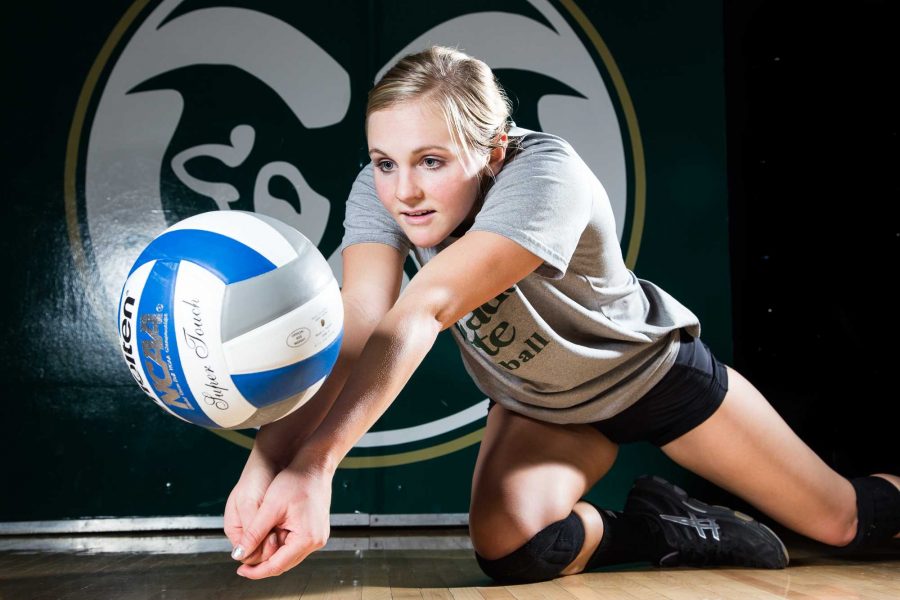 Rams libero Jaime Colaizzi is one of four seniors looking to be a leader on CSU's volleyball team. (Photo credit: Eliot Foust)

Every year, CSU’s volleyball team has to find a way to replace its outgoing seniors, and the next group of upperclassmen is usually ready to take the step up.

The Rams were thrown a bit of a curveball this season when Kaitlind Bestgen, the team’s leader in serving aces last season (40), decided to forego her senior season, to go along with the already obvious losses of three All-MW selections, including MW Player of the Year Deedra Foss.

Seniors Jaime Colaizzi, Crystal Young and MW Preseason Player of the Year Adrianna Culbert are taking the challenge head on.

“When we lose players in big positions, we have players who can fill those positions,” Colaizzi said. “We know that we do need to fill those shoes and make up for the loss in other areas. But, every year we go do it.”

Veteran leadership is needed both on and off the court for CSU, since it is vital to how Hilbert wants to see his team come out and play at the season opener against Baylor on Friday at 6 p.m.

“I want to go out and play with maturity, and we’re putting four seniors out on the court, so I think we can do that,” Hilbert said.

The fourth senior is one that fans might not recognize Friday. But, they should be very familiar by the end of the season.

Senior transfer Alex Reid comes to CSU from Long Beach State, and brings tournament experience along with her. She led her team to a Big West title in 2014 and earned first-team all-conference honors while helping LBSU advance to the second round of the NCAA Tournament that same year.

Hilbert recruited her when she played at Grandview High School in Aurora, so he was already familiar with her game. Now, three years later, he had to evaluate a less tangible of aspects of it. So far, he likes what he has seen.

“It’s been the greatest thing about her,” Hilbert said of Reid’s leadership. “She’s a solid player. She does everything for us. She defends, she serve receives, she serves tough, she hits the ball well, she can block. And she is very outgoing. Is she a great leader? Well she has been for us so far, but we haven’t played a match yet.”

Reid admitted she had some doubts about whether the rest of the players would look to her as a leader.

“Before I transferred, I was a little worried about it,” Reid said. “You wonder, is the team going to respect me? I am new, but I’m also an older player. So I should have that responsibility.”

Once she arrived on campus, meeting the team more in person eased those concerns.

“When I came here, I felt like it was really natural,” Reid said. “All the girls respected me and (Coach Hilbert) respected me. The first meeting with me, he told me I was a natural born leader, and I just want you to give. That’s all you can do is give to the program, and so far its been going pretty well.”

It is going well for Culbert and Young too, who understand how many responsibilities they will have trying to fill Foss’ place as setter. Culbert is already leading by example, as evidenced by her switch from a hitter to more of a setter this year.

“Anything we can do to put the best team out on the court,” Culbert said. “If me setting is going to help our team be the best we can then I’m all for it. If me hitting like I have been is what’s best, then that’s what I’d love to do.”

Culbert spoke about her role as a senior and the team’s most prominent players quite confidently. She carries the same mentality that has kept the program atop the conference for seven straight years.

Embracing a leadership role as a senior is just another one of the job requirements for Hilbert’s Rams teams. The MW Preseason Player of the Year treats it like its just another part of doing business.

“I don’t think it’s different than it is any other year with the seniors leaving,” Culbert said. “They take on a lot of stuff behind the scenes. It’s just a transition everyone goes through when they become a senior.”