No.12 CSU volleyball team opens season with 3-0 sweep of Baylor 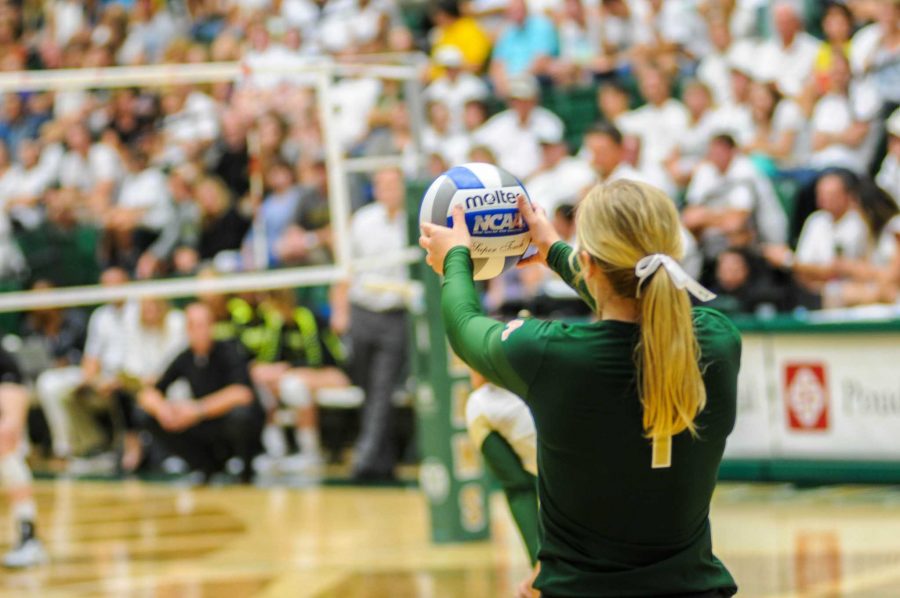 The No.12 Colorado State volleyball team set the tone for the rest of the year with a 3-0 sweep of Baylor by scores of 26-24, 25-18 and 25-20 in a “White Out” for the the season opener at Moby Arena. It was the first of three matches for the team this weekend as part of the Rams Volleyball Classic.

“I think there’s always first game jitters for everyone,” senior Adrianna Culbert said. “At least for me personally, I was really nervous … After the first set though, we kind of got rid of all of those jitters and started to play our volleyball.”

The Rams did a good job of hiding any nerves they had though. CSU jumped out to a 14-9 lead forcing Baylor to take a timeout. The Bears came back refocused, eventually taking the lead and nearly stealing the set.

Down 24-23, the Rams were able to fend off the set-point though, scoring three straight points of their own to take the first set 26-24. CSU finished with a .267 hitting percentage in the first set compared to .205 for Baylor.

Senior transfer Alex Reid showed fans why Hilbert was happy to bring her onto the team and insert her to the starting lineup. In the first set, she recorded three kills and two blocks, including a crucial block to force an error late in the set, putting CSU up 25-24.

“We were gritty,” head coach Tom Hilbert said. “We played like a team that has four seniors, which we do. Those kids did the right things at the right time.”

The second set was not quite as competitive. The Bears shot themselves in the foot with four early errors, causing head coach Ryan McGuyre to take a timeout with his team down 14-10. It did not do much good though as they recorded five more errors after that to finish the set with nine.

In addition to the errors though, CSU middle blocker Alexandra Poletto also made life tough for the Bears. The sophomore recorded four kills in the set as the Rams won 25-18 to go up 2-0 in the match.

Poletto maintained her efficient hitting, finishing with a team-best 10 kills on an efficient .667 hitting percentage.

“The setters were doing a really great job of placing it in a high spot for me,” Poletto said. “I just tried to go high. I saw I had a pretty strong blocker on me. They had two (blockers) most of the time, so just trying to go high and use their hands worked pretty well.”

The Rams were up 11-5 in the third set a when questionable net violation call slowed their momentum. Baylor took advantage, fighting back to take a 14-13 lead.

The Mountain West Preseason Player of the Year Adrianna Culbert came up big late in the set though. She recorded three straight points – she recorded a kill, a block that forced an error, and a service ace – to put CSU up 19-17.

The team would hold on, winning the set 25-20 on a service ace by Crystal Young to finish off the match 3-0.

Despite the sweep, Hilbert had some critiques for his team afterward. He liked the physical play from the middles, but pointed out that his team got out-killed 38-32. He said that everyone on player needs to do a better job setting the ball in good positions for outside hitters.

Hilbert attributed the win to his teams mature play and careful handling. CSU tallied 14 errors, compared to 26 by Baylor.

The players were happy to get the win and start the season off on the right foot, but were also understanding of what their coach said they need to work on.

“We’re far from a finished product,” Culbert said. “This is our first match, so we’re going to have some kinks. But I think throughout the match, we showed that we worked through so many of those kinks already.”

CSU is back in action Saturday at 10:30 a.m. against UC Davis in the first match of a doubleheader. The second match gets underway that evening, when the Rams take on Northern Iowa at 7:30 p.m.