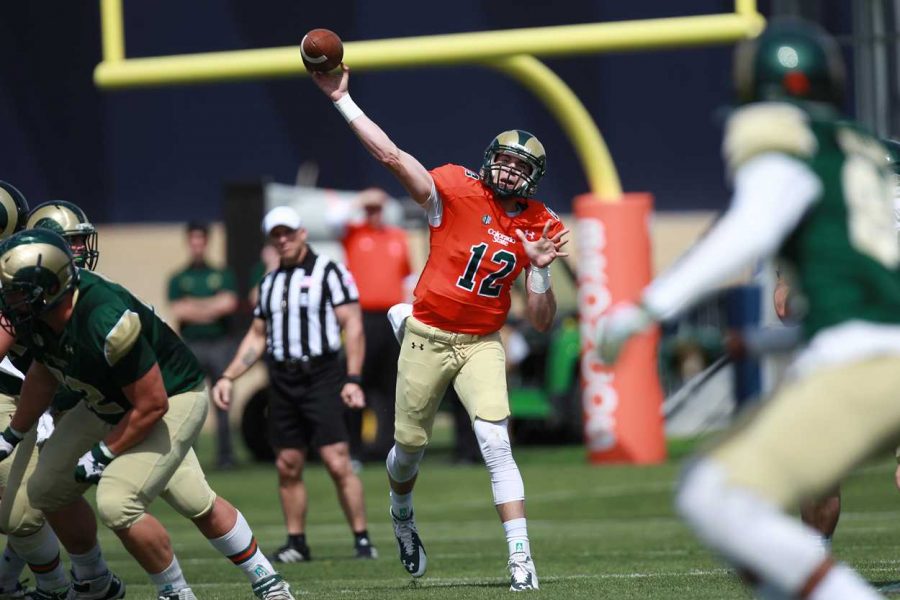 The Colorado State football team held its second scrimmage of the spring Saturday at the Denver Broncos’ Paul D. Bowlen Memorial Broncos Centre at Dove Valley, and though defense was on display throughout the scrimmage, the offense had its high points as well.

With star receiver Rashard Higgins sidelined by a hamstring injury, and running back Treyous Jarrells out with a high ankle sprain, there was room for other players to make their presence known at the skill positions.

Cole Anderson made the most of the opportunity. The senior-to-be caught five passes for 52 yards and a touchdown, and appeared to have great chemistry with quarterback Coleman Key. CSU head coach Mike Bobo said it was not the first time Anderson had caught his attention.

“If we were playing tomorrow, Cole (Anderson) would be in our top four,” Bobo said. “He’s done an outstanding job in every practice and every scrimmage. He is tough, he makes the tough catch and block. … He’s made an impression on us.”

Sammie Long IV stood out as well with his big-play ability. The junior-to-be hauled in five passes for 140 yards and a touchdown. He nearly found the endzone a second time, but was brought down as the 1-yard line, which Higgins teased him for as he came back to the sideline.

Danny Nwosu emerged as a receiving threat as well, receiving lots of early targets. He caught four passes for 46 yards, including a touchdown in the back of the endzone from Stevens on one of the final drives.

“We’ve got a nice group of receivers that I feel like we can function with,” Bobo said. “And then we’ve got guys who can make some explosive plays.”

The running back position is a bit murkier. Purdue transfer Dalyn Dawkins stood out though as a fast and powerful back who can get to the outside, but does not shy away from contact.

“He does a great job finishing his runs,” quarterback Nick Stevens said. “Instead of just running out of bounds and getting the yards that he can, he tries for every extra yard he can, and that’s really important to an offense.”

Dawkins rushed for 33 yards on five carries, and also established himself as a threat in the passing game by catching two balls for 49 yards. Most of the damage was done after the catch.

Though Dawkins started out taking most of the first team snaps, Jasen Oden Jr. got plenty of snaps with the first team as well. He took more than twice as many carries than any other back, and led the team with 52 yards and a touchdown. Deron Thompson ran for one touchdown as well.

The scrimmage also provided a closer look at the quarterback race between Nick Stevens, Coleman Key and Craig Leonard.

Key started out the practice with the second team and completed his first five passes. The first drive ended as one of his passes was tipped at the line and intercepted by Jacob Buys, but he had a good day overall and showed off his strong arm in the process. The sophomore-to-be completed 18 of 28 passing attempts and threw for 298 yards and a touchdown.

“Moving the ball is the main thing, regardless of where you are at,” Key said.

Stevens’ stats were not as eye-popping – completed 16 of 27 passes for 165 yards and two touchdowns with one interception – but Bobo complimented him afterward for his game management. The junior-to-be took the majority of reps with the first team, though Key played one drive with the first team as well.

“I thought both of them had their moments,” Bobo said. “Nick knew where he was going the whole day, going to the right guys. I thought he was aiming the ball a little bit. He was high on some stuff. High on way too many throws, just trying to be a little bit cautious instead of letting it rip, but he knew where to go.”

Bobo made it clear though that he does not plan on announcing a starter until fall, and that Leonard is still in the mix. Leonard completed 4 of 7 passes for 107 yards, including a 70-yard touchdown to John Freismuth. Incoming freshman J.C. Robles will also have a shot at the job in fall.

Bobo sounded pleased after practice with the personnel in all areas. He reiterated that the struggle has been, and will continue to be, in getting the team adjusted to his pace and system.

The way the offense performed in the middle of the fields was satisfactory for the new head coach, but he said he would like to see some improvement in the redzone. Turnovers, botched snaps and missed blocking assignments were points of frustration for Bobo, but he said that the offense’s execution had improved from last week’s scrimmage.

“We’re still not lining up as fast as I would like, and get the next play snapped,” Bobo said. “(That) has a lot to do with looking for signals, some guys understanding the signals, and we’re relying a little too much on the quarterback for the play. They have got to look to the sideline and get it, and you’ve got to learn to play at a faster tempo. That’s on us as coaches, we’ve got to push it in practice. Overall, we did a nice job.”