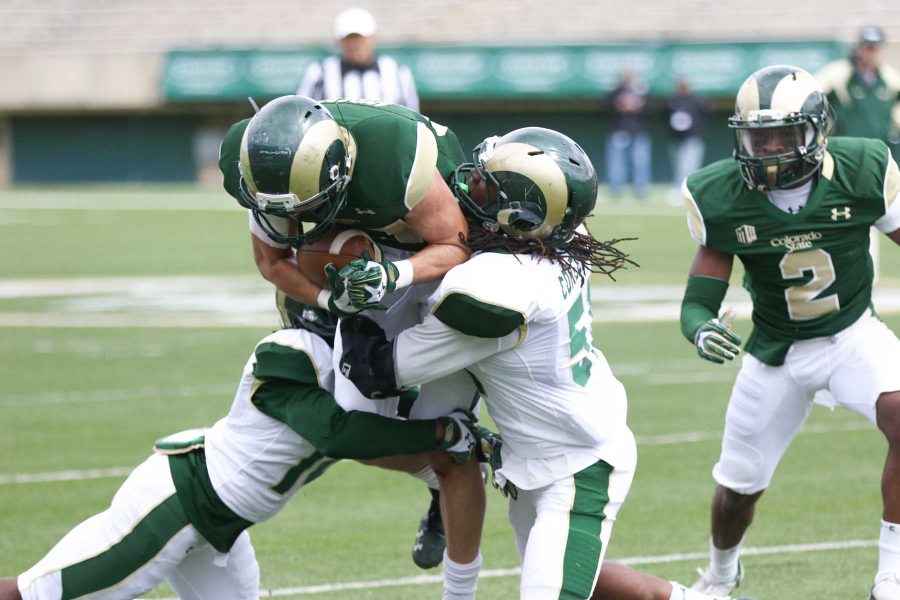 Whether it was on the ground on through the air, and no matter who was under center, the offense played with a purpose. Both sides kept the chains moving and put the defenses on their heels.

“They were playing fast,” head coach Mike Bobo said. “It helps when you’re getting first downs in a no-huddle. You’re able to keep the pressure on the defense and I thought they did a nice job of that today, especially the Green team. The Gold team did not get it going as much. They probably had more big plays down the field that resulted in their points, but both sides did a nice job offensively.”

The Rams were at their best with Stevens at the helm. He made the right reads throughout game and drives rarely stagnated with him under center. Key had his moments as well, and came up with some big plays in the passing game. Stevens’ game management and understanding of the no-huddle offense seemed to impress Bobo, though. He completed 27 of 41 pass attempts for 438 yards and four touchdowns.

“We’re going to try a few times a game to get lined up and snap the ball really fast before the defense can line up,” Stevens said. “That kind of keeps them on their heels. They can’t bring pressure as much. It’s tough to do that because you don’t really have time to process what’s going on, so you’ve got to be dedicated in the film room to know what you’re doing, and I think we’re all doing a pretty good job of that.”

Bobo has talked about being a run-heavy team, but the spring scrimmages were more about getting the quarterbacks adjusted, hence the emphasis on the passing game.

That speaks a bit to the confidence Bobo has in the backfield. Dalyn Dawkins and Treyous Jarrells played with the first team, while Deron Thompson and Bryce Peters played with the second, and Jasen Oden Jr. sat out with a leg injury.

Though Bobo joked after the game about not wanting to give away the secrets of the running game, Jarrells provided a bit of insight as to how the ground attack will be different this year.

“Last year, we did a lot of perimeter running,” Jarrells said. “This year, Coach Bobo wants it more up in there, downhill running. That’s what he preached every day, so that’s what we worked on: downhill running instead of running to the outside.”

Jarrells described it as more of a pro-style offense, which he believes is to his benefit since it is similar to the systems he played in back in high school and junior college. He led the team with 50 rushing yards and a touchdown.

No one running back clearly stood out from the others, but Jarrells had a solid day, especially considering he missed last week’s scrimmage with an ankle sprain. Dawkins got stopped on a 4th-and-1 situation late in the game, but he also scored in a goal-line situation early. The backs got the yards they needed for the most part, and also showed that they can catch out of the backfield.

If the running backs can catch, that just creates another threat in an already talented-filled passing game. The Rams got a bit of everything from the receivers, even with star wideout Rashard Higgins sidelined.

Jordon Vaden was particularly impressive, especially with Stevens in the game. Xavier Williams, Joe Hansley and Deionte Gaines showed off their big play abilities as well. Hansley led the team with 148 receiving yards and a touchdown.

Cole Anderson and Sammie Long both continued to build on impressive spring camps, and Danny Nwosu looked like a tank after the catch. But it was Trey Smith who probably had the most surprising performance. He beat his man on multiple occasions to haul in 71-yard and 49-yard touchdowns. Afterward, Bobo called him the fastest player on the team.

A low point from the scrimmage had to be the defense’s susceptibility to big plays, but it was worth noting that starting corners DeAndre Elliot and Preston Hodges did not play. Willie Udofia also had an impressive interception of Key. Still, safety Trent Matthews said the secondary had a lot of room for improvement heading into fall camp, starting with playing at the right speed.

“We’re doing it fast, but not fast enough,” Matthews said. “I mean, I give it to Coach Bobo and his staff. Offensively, they’re wearing us out with the fast pace. But it’s our job really to just work at each other and get better, and right now I don’t think we did that today.”

Another area of concern might be kicking. Wyatt Bryan barely had enough distance to connect on a 42-yard field goal and missed from 45 yards out. Berto Garcia made both of his kicks (27 yards, 32 yards) but did not get a ton of air under his kickoffs.

Overall though, Bobo is looking at the spring camp as a success. There is still a lot to work on before the season starts, but he was pleased with the progress showed during the final scrimmage of spring.

“We got better everyday but I think we may have taken a few steps backwards today defensively with all the big plays,” Bobo said. “But overall, it was a tremendous effort with guys trying to get better, and we’re going to continue with that same mindset and attitude to have a chance to be where we want to be, which is hopefully competing for a championship in the fall.”