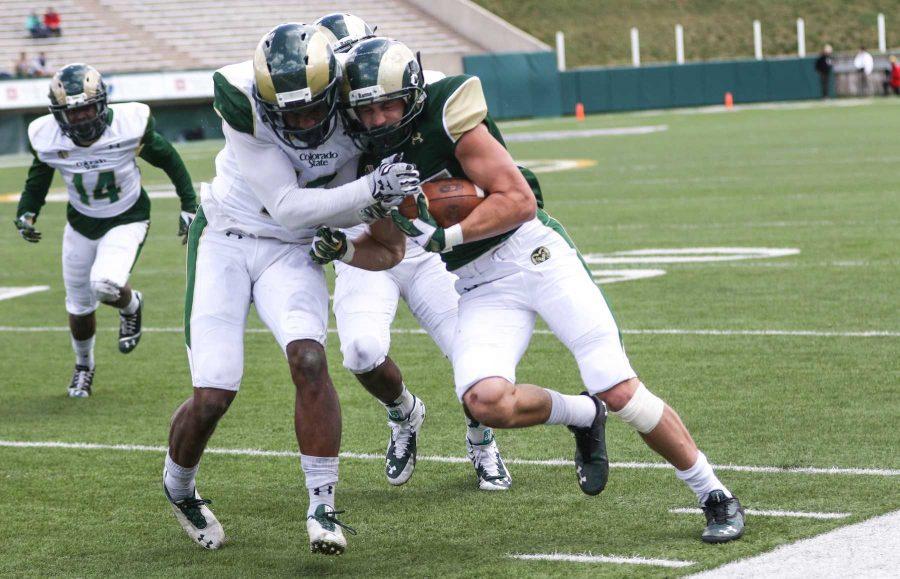 Defense gets to the quarterback

CSU’s pass rush struggled mightily at times last year, but have shown a penchant for getting to the quarterback this spring. During Saturday’s game the defense got to the QB five times, including two by Colton Foster. Defensive back Marcus Wilson, defensive tackle Terry Jackson and linebacker Evan Colorito each recorded a sack as well.

Big plays are flavor of the day

The defense did struggle however against the big play. Of the offenses’ nine touchdowns, six came on gains of 25 or more yards. Robert Ruiz also had a near-touchdown after picking up a fumble by teammate Trey Smith and running 44 yards before getting tackled inside the 10-yard line.

Cartwright, Higgins, others out

Missing from Saturday’s game were a number of key players who CSU hopes to have back in the fall. Wide receivers Rashard Higgins and Elroy Masters Jr., along with tight end Kivon Cartwright, center Jake Bennett and running back Jasen Oden Jr. all missed Saturday’s game with injuries, but are expected to be ready for CSU’s Sep. 5 opener.

On the defensive side, the Rams were without defensive backs DeAndre Elliott and Preston Hodges, and linebacker Kevin Davis and cornerback Davon Riddick suffered knee sprains during the game.

Under Jim McElwain’s regime, wide receivers Jordon Vaden and Sammie Long IV struggled to break into the rotation and often battled injuries and dropped passes. However, they have both been impressive throughout the spring and were yet again Saturday. Each caught a touchdown pass, with Long hauling in three passes for 46 yards and Vaden catching four ball for 71 yards.

Quote of the day:

Spring ball was a success. I probably had more fun than I’ve ever had in spring ball, which probably has a lot to do with the fact that I’m a first-year head coach. We’re coming in trying to establish a new identity and a new culture, and we’re going with what we believe in with a team that had had success.