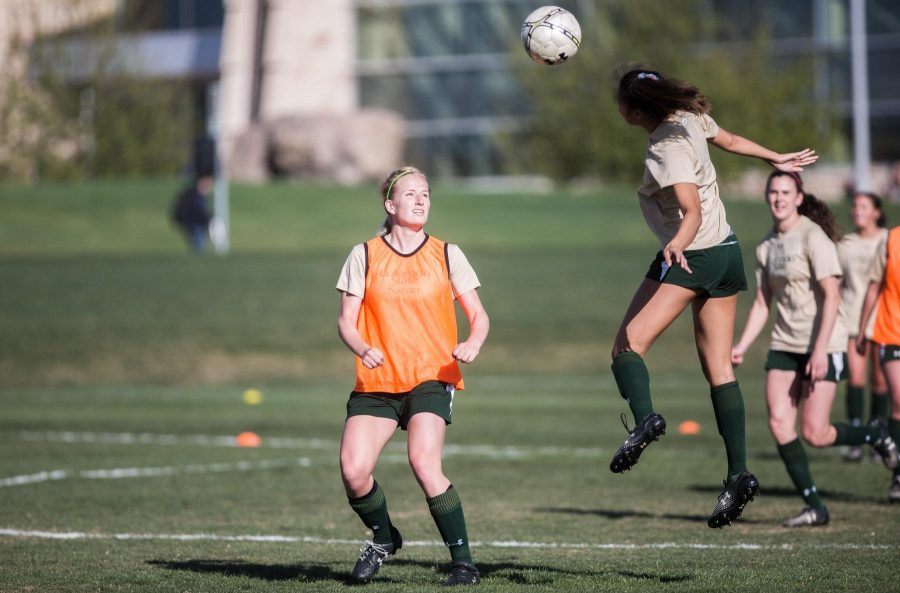 Janelle Stone [right] headers the ball over Taylor Nelson's head at practice Tuesday morning on the IM fields by the lagoon.

Year three for CSU’s women’s soccer program starts this fall, and after going 4-15 in the 2014 season, a new-look roster may finally be able to get Rams soccer off the ground.

At least 12 new players — including 10 freshmen — will don the green and gold for head coach Bill Hempen in his third year with the Rams. That’s enough players to field an entire squad and still have a substitute in newcomers alone.

“My hope is that this is the last huge class that we bring in,” Hempen said. “When you’re trying to build, it’s going to be (huge).”

Hempen developed a reputation for turning collegiate soccer programs around when he led Colorado to a 10-8-2 record in 2002 in his second year with the Buffs, after they had gone just 3-11-1 the year before.

Six new CSU players hail from Colorado, including forward Bethany Stivers, who graduated from Fountain-Fort Carson High School in 2013. Stivers initially left the state to play Division III soccer at Cornell College in Mount Vernon, Iowa, where she recorded 35 goals, 21 assists and all-Midwest Conference second-team selections in both her seasons.

Joining Stivers as the only other transfer announced so far among newcomers is Rocky Mountain High School product Shelby Bowden, who played the last two seasons as defender at Florida International. Bowden scored two goals for the Panthers last season.

The role of starting goalkeeper will be fought for among junior Jesse McGinley, who spent most of last season in the net, sophomore Paige Brandt and freshman Sydney Hall out of Bandys High School in Catawba, North Carolina.

Among key returners are senior veteran defender Megan Speed, who will likely serve as anchor in the backfield, and junior Gianna Bertana, who led the Rams with four goals last year as perhaps the fastest player on the roster.

But that player may be different this fall with all the new faces on the team, according to Hempen.

“With some of the kids we have coming in, I think that title is going to be challenged a little bit,” Hempen said of Bertana. “Everybody that’s been a part of it has been told that the roster is going to be a little bit volatile before we settle in.”

The Rams play their final two spring scrimmage games at home on The Lagoon field this weekend against Division II opponents Fort Hays State and Western State, before shutting down team operations until the fall.

Hempen’s focus in spring practice has been on defense.

“This is our last week, and the first time we’ve even really talked about attack,” Hempen said. “We’ve been working on defending because we’ve just given up too many goals. We’ve really concentrated on being better defensively than we’ve been in the past. The longer you can keep the score 0-0, the better opportunity you have to steal one at the end of the game.”

The Rams open up their season in the fall against rival CU at home.