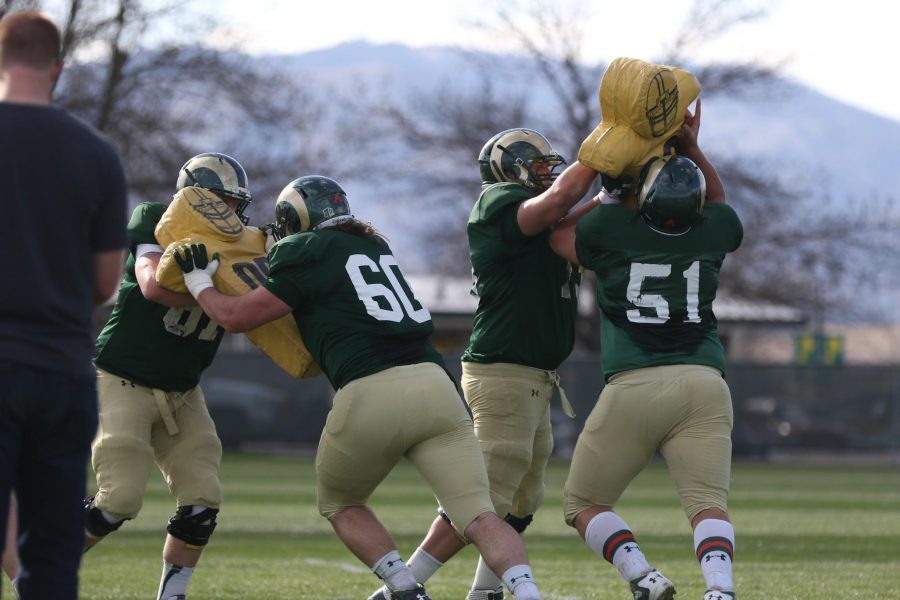 A year ago at this time, the Colorado State offense was in the process of replacing four starting offensive linemen, including second-round pick and center Weston Richburg.

Now, CSU is again in the middle of replacing the centerpiece of its offensive line. This time, CSU is looking to replace starting guard Mason Myers as well as left tackle Ty Sambrailo, a player projected to be selected in the first three rounds of the NFL Draft later this month.

But unlike a year ago, CSU’s offense is in the process of learning a brand-new system from a brand-new group of coaches after the departure of head coach Jim McElwain and his staff in December. They’ve got a new head coach in Mike Bobo, and a new offensive line coach and offensive coordinator in Will Friend, as well as an unfamiliar system and new terminology. The challenges facing the group are different, but the goals are the same. It’s been a period of adjustment through the team’s first six practices this spring, though CSU’s three full-time starting linemen last season say they have enjoyed the transition.

At the forefront of the push for more physical play has been not only Bobo, but Friend as well.  Friend, a two-time All-SEC selection and four-year starter at Georgia between 1993 and 1997, was the mastermind behind one of the nation’s best rushing attacks a year ago as the team’s running game coordinator. Under Friend’s tutelage, the 2014 Bulldogs’ offense ranked in the top-15 nationally in rushing offense with 255 yards per game, scoring offense (41.7) and fourth-down conversion percentage (85.7%). The Bulldogs also boasted two Heisman-caliber running backs in Todd Gurley and Nick Chubb.

Friend brings a much different approach to the game than what his predecessor Art Valero did, though. Instead of Valero’s “grandfather-like” approach as junior right tackle Sam Carlson described it, Friend brings a loud, brash and brazen style of coaching, and he isn’t afraid to let players know when they aren’t doing their job.

“Coach Valero was the guy to take you aside and teach you what he wanted, then you’d go out there and execute it,” Carlson said. “Coach Friend is a little more vocal, and he’s a little bit more of an effort and toughness guy who wants you to get after it, and then in the film room, he’ll sit down and tell you what to do.”

Though there isn’t a style players say they prefer, some believe Friend’s style will help this team to assume a more physical style of play.

“For me personally, it’s benefited me a lot,” redshirt sophomore Fred Zerblis said of Friend’s in-your-face demeanor. “For some guys that could be a drawback, but for me personally, and the tougher guys on this team, I think it’ll definitely be a positive for us.”

Along with Zerblis, O’Brien and Carlson, CSU returns junior-to-be Nick Callendar, who appeared in 12 games while starting three last season, along with Jake Bennett, last year’s projected starting center, who tore his ACL in fall camp. Behind them sits a host of players looking to break into the rotation during spring and fall camp, including three freshman who will arrive on campus between now and August. In total, there are 16 players competing for five starting spots, something Carlson believes will push every player to bring their “A” game each day.

“It’s important for us because those guys have to be ready at any time to step up into a starting role if one of us goes down,” Carlson said. “We had that problem last year in fall camp where guys got hurt and we needed someone to step up and fill a role. They have to bring it on every single play, because every single play gets broken down in the film room, so if they’re slacking we’re going to know. That kind of effort tells us who can count on and who we can’t.”

Though the five expected starters, Callendar, Carlson, O’Brien, Zerblis and Bennett, have yet to all play together, they have a level of familiarity with each other that they believe will be an integral part of successfully transitioning into a new offense.

“It really helps because we know how each other plays at game speed,” O’Brien said. “When we get out to practice we understand it, we aren’t coming out here not understanding what that speed is like. There’s a big trust factor between us, especially knowing that Fred is going to be playing next to me and that I can count on him to do his job, and he can count on me to do my job. Then we know that all five of us are going to be doing our jobs.”