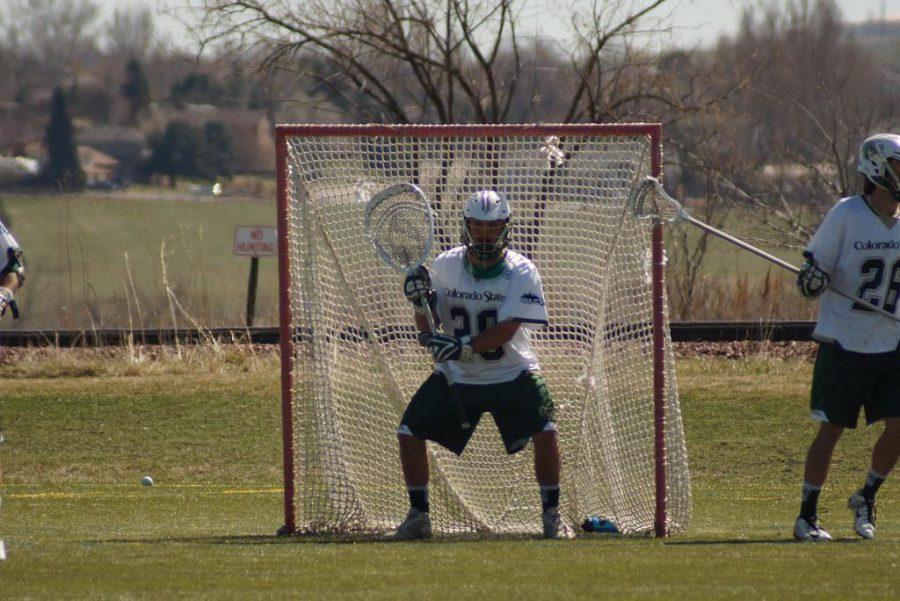 Jake Bender wasn’t expected to be a game-saving goalie for CSU’s men’s lacrosse club at the start of the season.

After Jack Regan and Koltin Fatzinger, the players who had split-time in the net for the past three years, graduated following last season, this season’s goaltending responsibilities initially fell on the shoulders of sophomore David Salamie.

Bender had almost zero on-field collegiate lacrosse experience prior to three weeks ago. He redshirted for the Rams last season after finishing his high school career in the net at Evergreen High School in Evergreen, Colorado the year before.

“We came into the fall thinking we had one goalie, David, and there wasn’t a whole lot of expectations of what Jake could bring,” CSU head coach Alex Smith said.

Calling Regan and Fatzinger “two of the best goalies we had at our level,” Smith said he expected a rebuilding year for his goaltenders. But with Salamie in the net, the Rams leapt out to a solid 6-0 start this spring.

Then they dropped four games in a row to Arizona State, Sonoma State, Florida State and Grand Canyon, all of whom the Rams led at some point during the first half, and Salamie started to doubt himself as a second-half goalie.

Before CSU’s home matchup against Chapman following the Grand Canyon loss, Salamie approached Smith and told him Bender should replace him after halftime to close out the game. Smith obliged, and Bender answered the call, making six saves in the second half against Chapman to give the Rams a much-needed victory to end their four-game slide.

“I’ve been always kind of a pressure player, so I felt like I could do my job,” Bender said. “Going into that Chapman game, I knew there had to be big plays in the second half, and the team came through and won that game, so it was great.”

When the Rams traveled to Michigan State following their bout with Chapman, Smith planned on returning to his normal starter in Salamie and considered throwing Bender in for the second half again depending on how his team performed in the first. But illness overcame Salamie the morning of the game, and Bender got the call to start.

He went the distance and then some, as CSU won 9-8 in double-overtime, thanks to nine Bender saves, including one in overtime, and a game-winning goal from sophomore A.J. Stewart with six seconds remaining in the second extra period.

“I was very proud of him he came in super clutch,” Salamie said of his fellow goalie. “After the game, it was funny, he said, ‘I finally did it, full games suck.'”

Bender voiced that sentiment again, explaining, “being goalie is a pretty stressful position, it’s hard to put a whole game together.”

Smith will likely continue the strategy of playing separate goalies in each half, Salamie in the first and Bender in the second.

“I do well in the first half always,” Salamie claimed. “The second half, there’s just too much pressure for me, and he likes the second half. He can save the ball just as well as I can. I’m a first-half goalie.”

Bender attributes his ability to handle pressure partly to his former alpine skiing career. At Evergreen High School, Bender dedicated most of his life to competitive skiing, racing for EHS as well as a club based out of Winter Park Ski Resort. He took online classes during the winter as he traveled around the state and country to race. It paid off with two state championships in separate alpine skiing events: the giant slalom his junior year and the slalom as a senior.

According to Bender, the mental preparation required before a successful run is similar to that required to play goalie.

“Alpine is always a stressful sport, it’s always hard to dial in,” Bender said. “It’s kind of the same with goalie … You won’t be saving every shot, that’s a fact, so it’s about taking the ones you can save and what you can do different for the ones you miss, and how to communicate with the defense better. It’s a mental game you’re playing back and forth with yourself.”

According to the trio of Smith, Bender and Salamie, the fellow goalies are close friends who sometimes hang together outside of practice and team activities.

With Salamie having two more years of eligibility as a sophomore and Bender having three as a redshirt freshman, the duo could possibly evolve into a similar pair to Regan and Fatzinger, who won two MCLA Championships together in 2012 and 2013 while splitting time in the net. Regan managed an impressive save percentage of .665 in his final season last year while Fatzinger broke the .600 milestone at .604.

While Salamie and Bender are currently only notching respective save percentages of .564 and .520, gaining more in-game experience will help to quickly improve their goalie skills.

“We’ve seen more improvement out of him in the last three or four weeks than we have in the last year and a half, I think that’s a testament to him getting comfortable in the system and the collegiate lacrosse landscape,” Smith said of Bender.