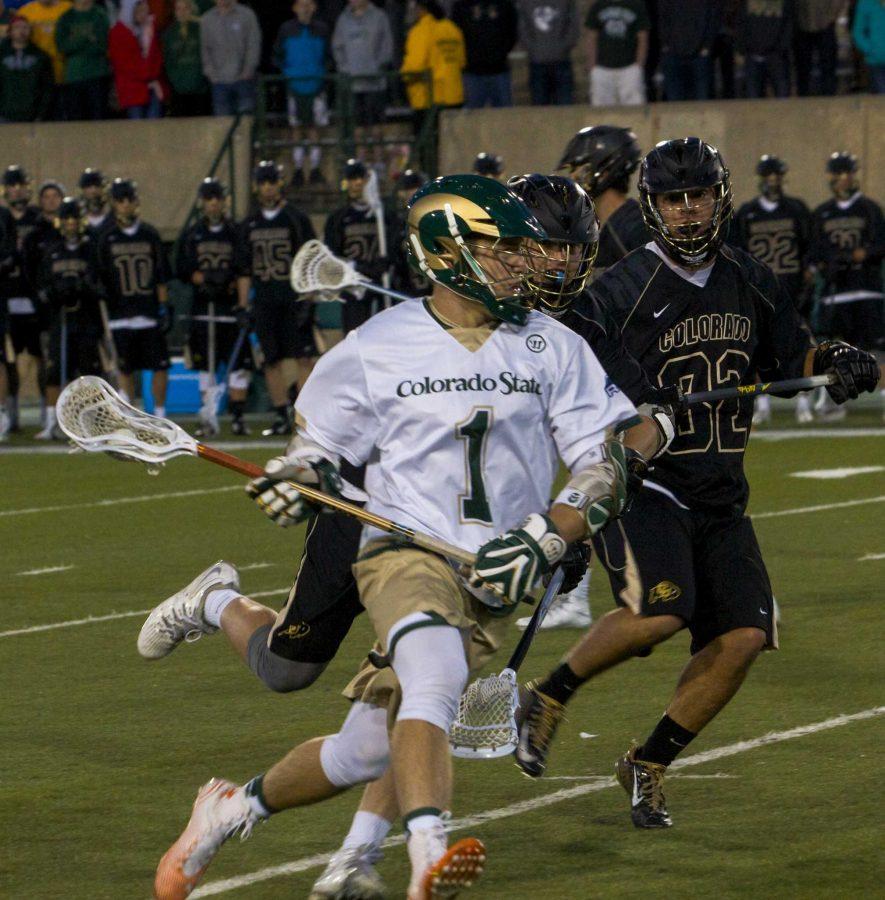 Colorado State attackman Casey Joy (1), runs toward the goal during a game earlier this season. (Photo by Cam Bumstead)

It took double-overtime to decide the Rocky Mountain Lacrosse Showdown between CSU and Colorado Saturday night at Hughes Stadium, and the Rams ended up on the wrong end of a 10-9 result in front of a crowd of about 2,500.

CSU faced a deficit most of the night. The Rams scored the first goal of the game, but the Buffs went a 4-0 tear to take control and hold it until late in the game.

The Rams finally fought all the way back in the fourth quarter to force play beyond regulation. Heading into the final period, the Rams were down 8-6, but in the opening seconds of the fourth, freshman midfielder Collin Zines scored a goal to cut the Buffs’ lead to 8-7 on an acrobatic spin in the air after leaping from behind the goalie’s crease.

CSU goalie David Salamie then made a crucial save on a shot from CU senior attackman Jace Glan to keep the Rams’ hopes alive, and then Zines struck again with the tying goal on the other end of the field to make the score 8-8 with 10:19 to go.

“Zines, he’s an amazing player,” CSU captain Eric Uhl said. “He’s a freshman, he’s definitely going to be great for us in the future, he’s got an excellent shot and he’s only going to improve. He’s one of our role players right now.”

But the Rams’ defense failed to stop the Buffs from notching one more after Zines filled his role. CU freshman midfielder Collin MacIlvennie snuck one past Salamie with 6:23 remaining to put the Rams into desperation.

With 2:21 to go, though, the Rams found their answer with an Alex Creech goal set up by a perfect pass from sophomore attackman Brian Taggart right into the middle to a cutting Creech.

Sophomore midfielder Chase Warner created an opportunity for the go-ahead goal for CSU as time expired, firing one with plenty of mustard directly toward the net, but CU goalie Jensen Makarov made an incredible save to force overtime.

Salamie remained in the net the entire game at CSU head coach Alex Smith’s discretion, abandoning the strategy of bringing in redshirt freshman Jake Bender in the second half to relieve Salamie. Leaving Salamie in the net was certainly the right call Saturday, as the sophomore made plenty enough saves to put the Rams in a position to win, including two in overtime.

“It wasn’t a hard decision, Bender’s been doing great for us, (but) Salamie’s our guy,” Smith said. “The end of the game, I thought he played great.”

In each overtime, the Rams took a shot on goal that bounced off the frame. In the second extra period, CU’s Glan finally ended it with his second score on the night.

“It was a great lacrosse game,” Smith said. “We’ve been in a lot of one-goal-games this year, and for us to go through some of the adversity we went through, to battle with them and come back from two three-goal deficits, I’m really proud of the guys. It stinks to lose of course, but … they should be really proud as well.”

Luckily for the Rams, the season series with the rival Buffaloes will continue in the first round of the Rocky Mountain Lacrosse Conference Tournament in Boulder on May 1.

“We got the next two weeks … so hopefully we’ll do the same thing they did to us down there,” Uhl said.