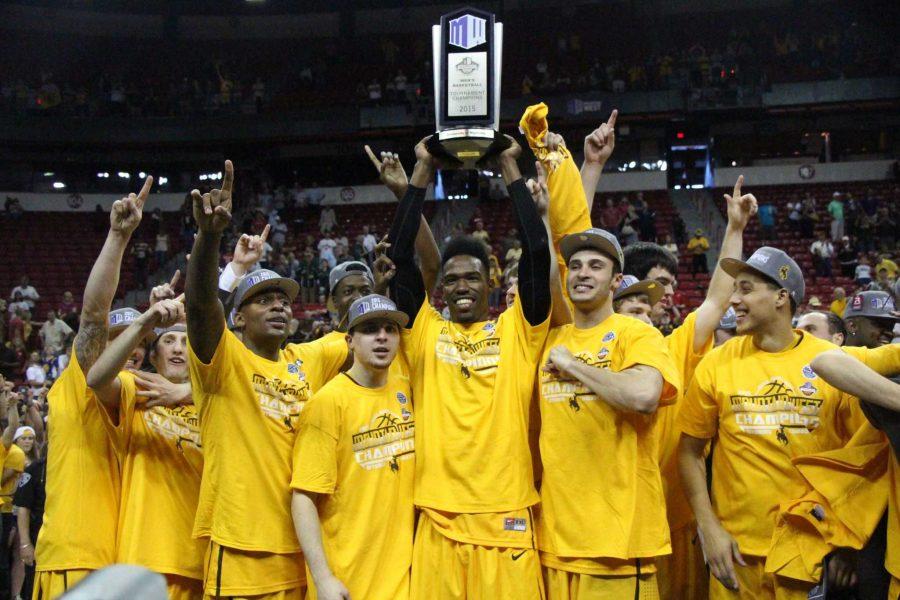 LAS VEGAS – The Cowboys are going dancing for the first time in 13 years.

Wyoming locked up an NCAA tournament bid with a gritty 45-43 win over San Diego State in the MW Tournament finals at the Thomas and Mack Center on Saturday.

“I think sometimes through adversity you do become stronger and you’re hardened,” Wyoming head coach Larry Shyatt said. “This team is hardened.”

Josh Adams was named tournament MVP. The junior guard averaged 18.7 points, 4 rebounds, 2.7 assists and 1.3 steals over the course of the tournament. He scored 10 points and grabbed three rebounds in the title game.

“Been relentless all year,” Adams said. “We’ve been in dogfights all year. This is the style we play.”

The Cowboys came out strong on both ends, building a 14-2 lead while SDSU went 1-for-10 from the field to start out. Larry Nance Jr. carried the team early, scoring 12 of its first 20 points. He finished with 16 points, six rebounds and three assists.

SDSU began to adjust by switching J.J. O’Brien onto Nance and sending Malik Pope to help double-team. It resulted in the Wyoming forward going scoreless for the final 9:30 of the half.

A 3-pointer by Charles Hankerson Jr. to put the Cowboys up 28-19 with 3:39 left in the first would turn out to be the team’s last points of the half. Pope and Matt Shrigley connected on threes of their own to cut the lead to 28-25 headed into the break.

SDSU picked up where they left off after the intermission. The Aztecs went on a 14-0 run spanning from the end of the first into the second during which they took their first lead of the game.

Adams hit a three to finally break a scoring drought that lasted over 12 minutes which Hankerson followed with another deep ball.

“Anytime you have a hot start shooting from the perimeter you got to be ready for that to fade a little bit,” Nance said. “San Diego State did a great job of pressuring all of us in the second half, kind of making it a little bit difficult to get those open looks. The resiliency of this team to stick to our game plan is really what pulled this one out.”

Wyoming got the lead back briefly after Nance found Derek Cooke Jr. who completed an and-one. O’Brien quickly answered with four straight points to get SDSU back the lead. He finished with 12 points and five rebounds. Pope led the Aztecs with 13 points.

Adams stepped up again in crunch time with a three from the corner to put Wyoming up 43-41 with a minute remaining.

“Clock was winding down, as it was the entire game,” Adams said. “San Diego State is an insanely good defensive team. We struggled getting looks, myself especially. They were front guarding me. I spaced to the corner. Hankerson made a great pass and it went in. I’m blessed the ball just went in.”

SDSU guard Aqeel Quinn missed on a pull-up three for the lead with the shot clock turned off. Cooke secured the rebound and was fouled immediately. The junior forward – a 46 percent career free throw shooter – sank both shots from the line to seal Wyoming’s first ever MW Tournament championship.

“I think I just stopped thinking about it,” Cooke said. “I got guys on my team, my coaches, everybody who has faith in me.

Wyoming’s tournament win gives them an automatic bid for the NCAA tournament.

“We’ve been so close before,” Nance said. “Just seeing it slip right from our fingertips. To know that this is ours, and there’s nothing anybody can do to take that away from us, like I said, it’s everything we imagined and more.”

With SDSU likely in and the potential for the MW to be only a three-bid league, it makes the future uncertain for tournament semifinalists Colorado State and Boise State.