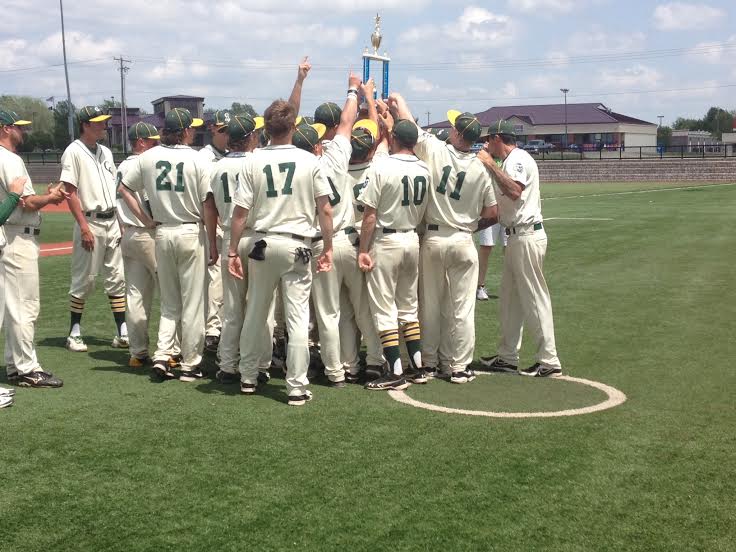 Members of the Colorado State baseball team celebrate their 5-2 victory over Iowa in Sunday's regional championship game. The Rams now advance to the NCBA World Series May 23rd in Tampa, Fla.

The Colorado State club baseball team opened conference play this weekend with three wins over rival CU-Boulder at City Park field. The Rams dropped a fourth game to the Buffs, which wasn’t included in the conference schedule, 10-2 in the finale of the four-game homestand. In the team’s three wins, CSU outscored CU 16-9 and opened conference play undefeated for the first time since 2012.

The Colorado State men’s golf team posted its best round of the tournament in Saturday’s finale at The Goodwin, once again moving up the leaderboard to finish in a tie for 19th at Stanford Golf Course.

“We definitely didn’t accomplish the goal we set when the week started,” said Rams’ head coach Christian Newton. “I am pretty disappointed with the overall outcome. I know our team is better than this, and to under-achieve is tough to swallow.”

Dominic Kieffer closed as the Rams’ top performer capturing a tie for 39th in the 132-player field. The junior, playing in the Rams’ No. 1 position in the lineup for the fourth consecutive tournament, opened with a 2-under 68 in Round 1 before closing with back-to-back scores of 72 in Rounds 2 and 3 to finish at 2-over (212), 15 strokes behind tournament co-champions Maverick McNeeley (Stanford) and Will Cannon (UAB) at 197 (-13).

Welcoming Colorado, Northern Colorado and Wyoming for the annual Fum McGraw Quadrangular, the Colorado State men’s and women’s teams both dominated each of the three dual meet pairings with the other schools.

Reigning Mountain West Men’s Field Athlete of the Week Tyler Schultz rolled to a pair of victories in the men’s hammer throw and shot put. In the hammer throw, Schultz again set a personal record with a throw of 206 feet, 2 inches for the victory.

CSU sophomore Aaliyah Pete won the women’s shot put with a toss of 52-5.25. Monet Jackson took second at 46-1.25, while freshman Aimee Larrabee placed fourth with a throw of 41-5. In the women’s hammer throw, Kiah Hicks was the top collegiate finisher with a toss of 186-11 while Jackson placed fourth at 175-11. Larrabee placed sixth at 171-8, while Marissa Wagner was ninth at 158-3.

Jonathan Edmunds was another multiple-event victor for Colorado State on Saturday, earning victories in both the men’s long jump and triple jump. In the long jump, Edmunds’ winning jump was 23-1.75. Teammate Josh Sandin took sixth at 21-10.75.

Up next for the Rams is the Stanford Invitational in Palo Alto, Calif., for a select group of athletes on April 3-4. The team will also compete at the Tom Benich Invitational in Greeley, Colorado, on April 4.

Collegian Sports Desk can be reached at sports@collegian.com and on Twitter @RMCollegianSpts.