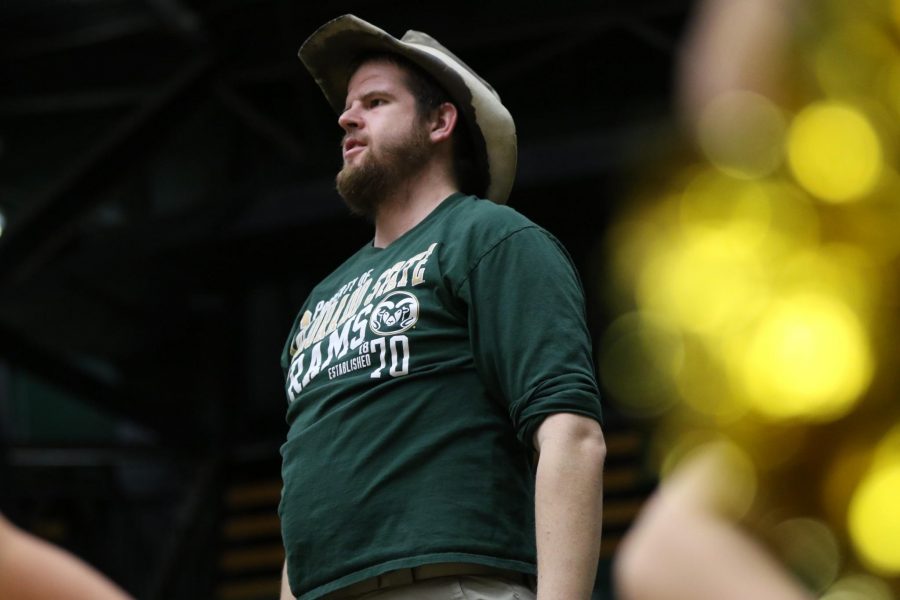 With just two minutes before tip-off in Moby Arena, there is only one seat taken in the east student section. Colorado State’s women’s basketball team storms out of the locker room onto the floor, running almost rhythmically to the sounds of fight music played by the pep band above. The sole body filling a seat in the student section stands up, revealing a massive frame that would surely block views if any students were standing behind him. A cowboy hat sitting atop this man’s head while he is clapping and shouting cheers for the Rams appears to add to his height.

Standing at 6 feet, 10 inches tall, Daniel McCarthy is literally and figuratively the biggest fan of CSU women’s basketball. The 28-year-old sociology major attends each and every women’s home game.

McCarthy attended his first CSU women’s basketball game three seasons ago in his first year studying at Colorado State and liked what he saw, saying the women players “didn’t have the ego that the guys have.”

Since then, McCarthy has attended every home game the past two seasons save for two. He admitted to missing one last year as well the first home game following the end of the fall semester this season against Cal-Poly. He even drives to make it the proximate away games each year at Wyoming and Air Force in Laramie and Colorado Springs, respectively.

As a veteran of the Army, where he served four and a half years of active duty from ages 18 to 22 in addition to another year of National Guard service afterward, McCarthy has a penchant for the teamwork he finds more visible in the women’s game than the men’s. McCarthy said he has only been to two men’s games in his time at CSU.

“Women, they actually play as a team,” McCarthy said. “There isn’t any one player who does everything, it’s a team effort so that’s a big part of (why I like) it.”

Another motivator behind McCarthy’s avid CSU women’s basketball attendance is his relationships with some players on the team he’s developed through classes with them. Last spring, he shared the classroom with sophomore forwards Ellen Nystrom and Elin Gustavsson in a finance course, and this semester has guard Hanne Mestdagh in his Management 305 class as well as senior A.J. Newton in his capstone course.

It’s no secret that men’s college basketball games tend to be much more widely attended by student bodies, but here at CSU, the difference is especially noticeable. McCarthy is often the only fan in the student section at women’s games.

“Last year, we were winning everything, and I just thought we’d start have students showing up, but we just can’t do it,” McCarthy said.

It’s been the same story this season as the Rams have rattled off 19 wins to go along with an 11-3 mark in the Mountain West that has them tied for first in the conference with New Mexico. With four games left on the schedule, CSU appears poised to win a second consecutive MW regular season title, but students have remained absent from their women’s basketball team’s home contests.

McCarthy criticizes the rest of the student body for not recognizing the entertainment CSU’s women’s hoops squad provides.

“Put it this way: it’s their loss that they don’t get (to see) the show,” McCarthy said.

According to Newton, she and her teammates notice McCarthy in the same spot in the stands every night and appreciate his passion as fan. Over the past two seasons, Newton has gotten to know him through some some post-game chats.

“When I first got here, I was like who is this guy? He’s wearing a cowboy hat, he comes to every game front row, and then after the games he’s social and you just want to talk to people that support you that much,” Newton said. “That’s what we really lack is student support and to know that he’s one of the most supportive students we have, it’s really awesome to know him.”

Newton also admires McCarthy for his past military service in addition to his commitment as a fan.

“He’s gone through things that I could never imagine, so he’s an overall amazing guy,” Newton said.

No matter the result, win or lose, Newton and her teammates can count on seeing their biggest fan at every home game, standing in that same spot cheering to the beat of his own drum.