CSU women’s hoops season could be far from over 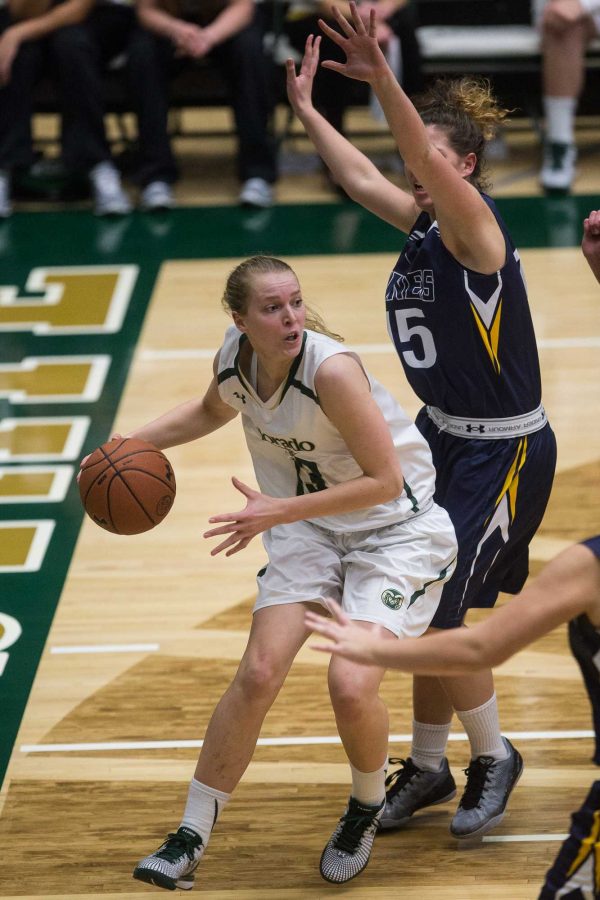 In-state rival Northern Colorado awaits Colorado State’s women’s hoops team in the first round of the Women’s National Invitational Tournament in the first meeting between the teams since 2012.

A.J. Newton and Gritt Ryder, CSU’s two senior leaders, thought they had played their last game at Moby Arena the week before last against Utah State in a victory that secured the Rams a second-consecutive regular season title, but they will have at least one more as CSU hosts the Bears in the tournament’s first round.

CSU, a No. 1 seed in the Tournament, could play up to three more home games with wins in the first two rounds.

Though the Rams hoped for an NCAA Tournament berth all season long, they fell in the quarterfinal round of the Mountain West Tournament last week in Las Vegas to San Jose State. A tournament championship is basically required to get into the Big Dance out of the MW as it is not a strong enough conference to receive any at-large bids.

Despite not contending for a national title, CSU can still prove itself as one of the finest women’s basketball teams in the country with a WNIT Championship. Here are three keys for a CSU victory over the Bears:

Teams participating in the NIT are often heartbroken after not getting into the NCAA Tournament to compete for national championship. Last season, CSU fell to Southern Utah in the first round of the WNIT while not playing its best basketball after losing out on an NCAA Tourney bid with a loss to Fresno State in Vegas. The WNIT is not meaningless, as advancing deep into the tournament or capturing a championship would be a big deal for CSU and potentially the whole Mountain West Conference. Boise State likely won’t be winning a national title with the MW’s automatic NCAA berth, so the Rams can play to prove they are not only the best team in the conference, but also to show the MW is on the rise in women’s basketball. Eventually, the league could reach a high enough caliber on the women’s side to send an at-large team to the NCAA Tourney, and those regular season championships Ryun Williams keeps bringing in could actually buy a bid. Plus, this is a rivalry game. The Rams should get pumped and treat it like one. Moby might fill up as the schools are separated by a short stretch of Interstate-25, so the Rams have a chance to put on a show.

Keep Strange off the Glass

Giving up offensive rebounds has been an Achilles’ Heel for CSU all season long. In regular season losses against both Boise State and Fresno State, the Rams gave up double-digit offensive boards that allowed their opponents double-digit second-chance points. UNC senior veteran D’Shara Strange is a beast on the glass. The All-Big Sky Tournament selection averages 8.9 rebounds per game on the season, including 2.5 offensive rebounds. The senior became the Bears’ all-time leading rebounder this year with 1,009 career boards, just the sixth player in Big Sky Conference history to reach the 1,000 rebound milestone. Strange is also on the verge of breaking her school’s scoring record of 1,582 career points. The Rams need to use their length, athleticism and tenacious determination against the 5-foot-10 forward to make it tough on her in the paint.

This is March basketball. There is nothing as exciting as a chance to win a post-season tournament in the final weeks of March for a college basketball player. The Rams should relish the moment. This tournament holds this group’s final games together, and it has been a special one with Newton and Ryder transferring to help turn the program around these last two years. These two are possibly the most important players to CSU’s program since Becky Hammon, and they have provided a lot of good times for CSU basketball fans. The Rams can get out there and have some fun in their final games together competing for a championship. They have absolutely nothing to lose, so they should leave it all on the floor. The Bears are no joke with a record of 20-12 and a fourth-place finish in a competitive Big Sky Conference. To advance against this team, the Rams will have to play the game like they love it.

Tipoff is set for 7 p.m. The winner between the Bears and Rams will play the winner of South Dakota versus Creighton.