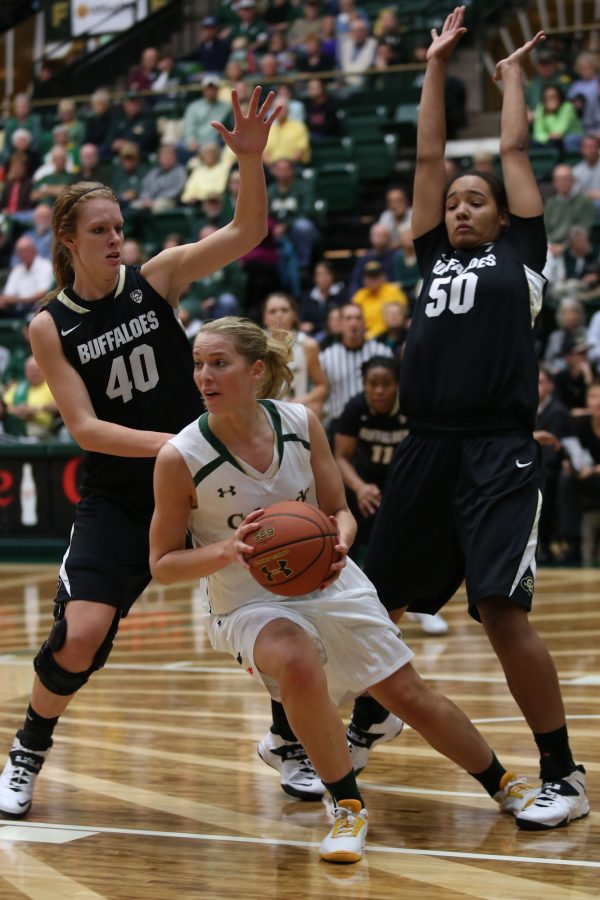 Guard Ellen Nystrom (13) searches for a pass late in the game against rival CU at Moby Arena last night. Nystrom had four points and nine rebounds in the loss to the Buffaloes.

To reach the NCAA Tournament, Colorado State’s women’s basketball team must win three more games this week in Las Vegas and come out on top of the Mountain West Tournament.

The Rams are in familiar territory as they head to Vegas with a Mountain West regular season title for the second-straight season, but they hope for a different final result as they suffered a disappointing upset to Fresno State in last year’s championship round, missing out on a bid to the Big Dance.

After clinching the outright regular season title Friday against Utah State, the Rams have already moved on to focusing on their next goal of winning the MW Tournament and getting into the NCAA Tourney. Though clinching a regular season championship is undoubtedly an achievement, the Rams are ready for bigger and better games.

“I think after last year, we saw that it didn’t matter at all,” senior guard Gritt Ryder said of winning the regular season. “Now our goal is to win this tournament and that’s all we’re focused on.”

CSU starts its streak of must-wins against San Jose State Tuesday at 1 p.m. MT after the Spartans took down Utah State 99-85 in the play-in round of the tournament. The Rams beat the Spartans in both of their meetings this season, 77-59 in Fort Collins and 85-76 in San Jose. But the odds of beating any team three times in a single season are never high, and the Rams know their task is daunting as every team they face will be excited to knock off top-seeded CSU.

“The target is even bigger on us right now,” head coach Ryun Williams said. “Regardless of who we get, we know we’re going to have to play a really good game to get a victory. Our kids are smart, we don’t look at those seeds. These are teams that have good players and we’re going to have to be ready to play.”

According to sophomore forward Ellen Nsytrom, March is less about the scouting report and much more about the team that executes its own game.

“Right now, every team has played every team at least once so we all know everybody’s secret. We all know how to play every team, so it’s just about who wants it the most, and I know our team, we just want to win,” sophomore forward Ellen Nystrom stated.

The scouting report on SJSU is pretty easy to come up with, though, and the Rams know they will have to be on top of their transition and perimeter defense as the Spartans are a true run-and-gun team that jacks up 27 3-pointers per game. Their key players include All-Mountain West selection Ta’Rea Cunnigan, who averages 17.6 points per game along with 4.0 rebounds and 1.8 assists, as well as guard Rebecca Woodberry. The duo combined for 51 points in SJSU’s tournament win over Utah State.

CSU’s bench will be ready to go to relieve starters against SJSU in what is sure to be an up-and-down track meet of a game against the Spartans, according to Williams.

“We’ve used everybody. Each game calls for something different and our kids have done a great job of all being ready when their number has been called,” Williams said.

Victoria Wells and Emilie Hesseldal are at full strength, despite not getting their normal minutes in the Rams’ last few games of the regular season.

“We’re as healthy as we’ve been all year, so that’s a good feeling,” Williams said.

In fact, Ram fans might see slightly different playing rotations in the Mountain West Tournament as there is a need to preserve players’ bodies and energy with the first round on Tuesday and the second round on Wednesday with the final game coming Friday, providing only one day of rest for a three-game stretch.

“Managing these three games is crucial, how you manage the practices, keeping their legs fresh,” Williams explained. “Their legs are fresh, their minds are fresh.”

But still expect to see the players having their best games on the floor, as the Rams are in Vegas for nothing but a MW Tournament victory and a bid to the NCAA Tournament.

“We just have one mission and that’s to win it all, that’s all that’s in our head right now,” Nystrom said.