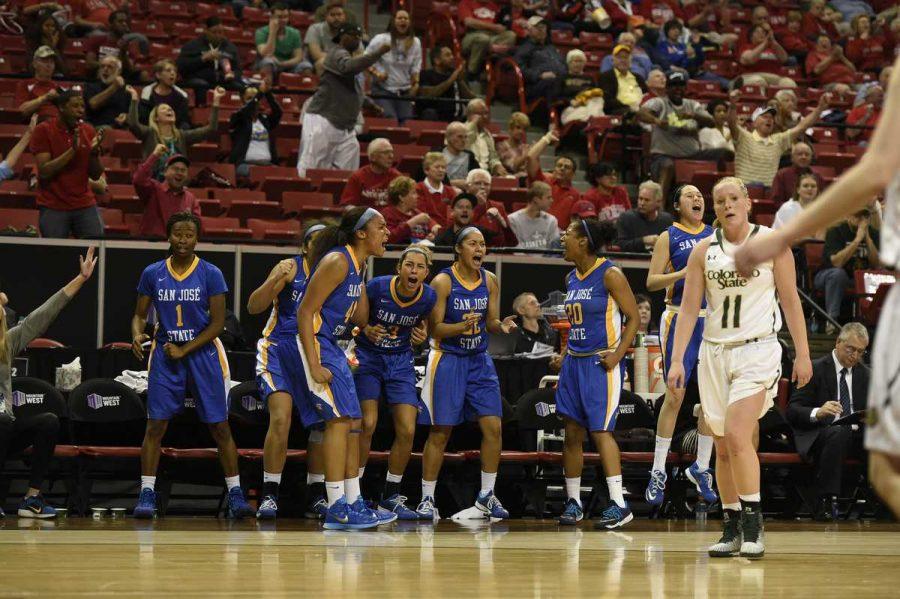 The Colorado State women’s basketball team came to Las Vegas with redemption on its mind. The Rams will leave empty-handed — again.

Another record-setting regular season was punctuated with disappointment, Tuesday afternoon, in Las Vegas, as the top-seeded Rams fell in the quarterfinal round of the MW Tournament to No. 8 San Jose State 64-55. It marked the first time in the 15-year history of the conference that the No. 8 seed knocked off the No. 1 seed.

Without the MW Tournament title, the Rams will not likely be receiving a bid for the NCAA Tournament, as they have not beaten any team in the RPI top-50 this season, even with the accolade of a MW regular season conference title.

“This is not what we expected,” said CSU sophomore forward Ellen Nystrom. “What’s done is done.”

Nystrom led the Rams with a monster game of 13 points and a Mountain West Tournament record 20 rebounds, but it was not enough to boost her team through a dreadful shooting performance. Senior guard Gritt Ryder was the only other Ram in double-figures with 10 points. CSU shot just 29 percent in the loss and never held a lead.

“San Jose, they were terrific,” said CSU head coach Ryun Williams said. “They played well today, (on) both ends of the floor. Just not a good day to have a bad day. We had a bad basketball game.”

Though SJSU failed to shoot much better, notching a clip of only 37 percent for the game, clutch shots from Aniya Baker, Rebecca Woodberry and All-MW First Team selection Ta’Rea Cunnigan repelled each of CSU’s efforts to build momentum for a comeback in the second half. The trio combined for 46 points, led by 18 from Baker and 17 from Cunnigan. Woodberry also grabbed 12 boards to go along with her 11 points for her own double-double.

Offensive woes were present from the beginning for CSU. After Elin Gustavsson picked up two fouls within the opening three minutes, she was sidelined for the remainder of the first half, and shooting struggles ensued for the Rams. The Spartans quickly doubled up the Rams score at 14-7, and it took a Keyora Wharry mid-range jumper to end a nearly three-minute CSU scoring drought. Alana Arias followed with a bank shot and then Hanne Mestdagh tied the score at 14 with a 3-pointer to complete a 7-0 CSU run.

The teams then traded baskets to stay tied at 16, which would be the last time the score was even all day.

But it stayed close until the end, as the Spartans struggled to find the net at times as well. Another three-minute scoring drought was endured by both teams before Baker snapped SJSU out of it with a 3-pointer with 2:56 before the half. Woodberry then hit another trey on the fourth Spartan attempt of the possession in which they grabbed three offensive rebounds to go up 22-16.

“We had a good game plan, we just didn’t make our shots,” Nystrom said. “They had probably their best game this year.”

It looked like the Rams were heating up to start the second half as they opened with a 5-0 CSU run courtesy of a Gustavsson bucket and Nystrom 3-pointer cutting SJSU’s lead to just two, 25-23, but three straight SJSU jumpers restored an eight point lead, 31-23.

That would be the start of the trend, as the Spartans squashed each and every run CSU made with momentum-killing responses.

“I think … at halftime we kind of got the jitters out, we thought,” said CSU senior guard Gritt Ryder.

Williams called timeout, and it looked like the Rams might heat up for a storming comeback as A.J. Newton and Jamie Patrick sank threes on three consecutive possessions. But the Rams traded baskets with the Spartans too many times, and could never got close enough to take a lead down the stretch. Newton was just 1-of-10 from the field before she hit those back-to-back treys. The senior, who played as a freshman at San Jose State, finished with nine points on 3-of-16 shooting.

“They can really shoot from all five positions,” said SJSU’s Cunnigan of the Rams. “We just wanted to make sure that we just stayed solid on defense, help, and be ready to close out on shooters.”

According to SJSU head coach Jamie Craighead, her team learned from the last time the teams met in a CSU victory that it had to take away CSU’s close looks in the paint.

“We had a really good game plan. I said before the game, ‘players make plays and execute game plans,'” Craighead said.

The Spartans move on to play the winner of Boise State versus UNLV Wednesday at 6 p.m. in their first ever MW Tournament semifinal appearance. CSU will likely receive a bid to the WNIT.

Collegian Sports Reporter Sam Lounsbery can be reached at sports@collegian.com and on Twitter @samlounz.