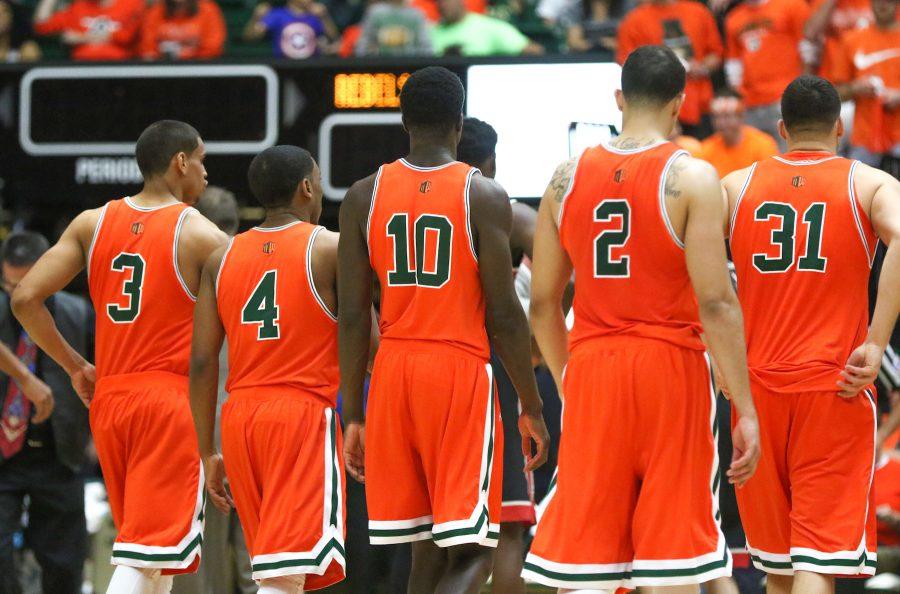 Records were set, but goals were not met.

The winningest team in the history of Colorado State men’s basketball fell short of the NCAA tournament, but that’s not how the season will be remembered.

Early on, and then throughout nonconference play, the transfer-laden team gelled seamlessly en route to a program-best 14-0 start that included winning the CGI Great Alaska Shootout. The Rams went on to earn a win over in-state rival Colorado, marking the program’s first win in Boulder in over three decades.

Consecutive losses at New Mexico and at home against Wyoming came as a sobering end to the run. CSU regrouped though, going on to set a new Mountain West record with a 56-point win over Nevada, while also notching a win at Moby over San Diego State.

The highlight of the season was an 18-point comeback at home over UNLV. The win kept CSU in contention for the MW title, and also kept the school undefeated (6-0) in “Orange-Out” games.

“We look good in these jerseys,” senior guard Daniel Bejarano said afterward. “We only get to wear them once (a year), so you have to get a win in them.”

The Rams wrapped up the season with a road win at Utah State to finish third in the conference with a 13-5 record. J.J. Avila’s outstanding play earned the senior forward first team All-MW honors.

Daniel Bejarano also anchored CSU during the run, garnering earned second team All-MW honors for the second straight year. Stanton Kidd, who completed the Rams’ “Big Three” made the most of his one year at CSU by earning honorable mention All-MW honors. Sophomore guard John Gillon was named MW Sixth Man of the Year.

CSU went on to beat Fresno State in the MW tournament. Avila sprained his ankle in the process, though. Without their leading scorer, the Rams bowed out to San Diego State in the semifinals.

However, head coach Larry Eustachy was confident that his team had already secured its spot in the Big Dance.

“We’re not on the bubble,” Eustachy said after the loss to SDSU. “We’re 28th (in) RPI. I’ve been through this a lot, and we’re squarely in the NCAA tournament.”

He turned out to be mistaken. Losing at New Mexico earlier in the season, coupled with blowing a 12-point lead at Boise State and getting swept by Wyoming, proved to be costly for CSU.

Wyoming capturing the conference’s only automatic bid by winning the MW tournament threw a curveball at the selection committee. It wound up being CSU that was left out. The Rams never heard their name called on Selection Sunday and had to settle for hosting the National Invitation Tournament.

“We lost 6 games…” Gillon tweeted in disbelief of the snub.

The NCAA tournament was what the team had its sights set on all year. The NIT was not what the Rams wanted to be playing for, and it showed.

Despite their best efforts to refocus, the disappointment appeared to get to them. A flat start was enough for first-round opponent South Dakota State to capitalize on. The Jackrabbits’ hot shooting effectively ended the Rams season in lackluster fashion.

A first-round exit from the NIT will unfortunately mar the perception of the 2014-15 CSU men’s basketball team, but the finale was not reflective of the team’s accomplishments. The Rams set program records for best start (14-0) and wins (27).

“It’s not about this last game, it’s about the whole nine months,” Bejarano said after the NIT loss. “All the hard work this summer, the memories and stuff like that… great year, like I said. 27-7 is not bad.”

Still, it’s not the ending the CSU wanted. For Bejarano and others, it was the last chance. He will not be back next year, nor will fellow seniors Avila, Kidd and Marcus Holt.

Next year might be a rude awakening for fans who perhaps did not appreciate their last go-around adequately. Avila, Bejarano and Kidd were not only the Rams’ leading scorers, they were also three of the team’s best rebounders. Their leadership and ability to get good looks in crunch time will be greatly missed.

CSU is not in awful shape, though. Juniors Joe De Ciman and Tiel Daniels started every game in which they were healthy and should be reliable options for the Rams next year. Gillon and fellow backup guard Gian Clavell have proven to be effective scorers and will have a chance to thrive with more consistent minutes.

The same goes for Fred Richardson, whose size and shooting ability should provide for some lineup flexibility. Antwann Scott will apply for a medical redshirt. If he can return, the Rams will have another ball handler and shooter. Jeremiah Paige redshirted as a true freshman, and seems to have potential as a scorer as well.

CSU has received signed Letters of Intent from high school seniors Prentiss Nixon, Nico Carvacho and Anthony Bonner as well, but none should be expected to contribute much as freshmen.

So essentially, the Rams are left with a lot of guards, and Daniels. They have recruited junior college standout Emmanuel Omogbo to help Daniels man the front court, and do not be surprised if CSU offers a scholarship to another junior college big man who is eligible to play immediately.