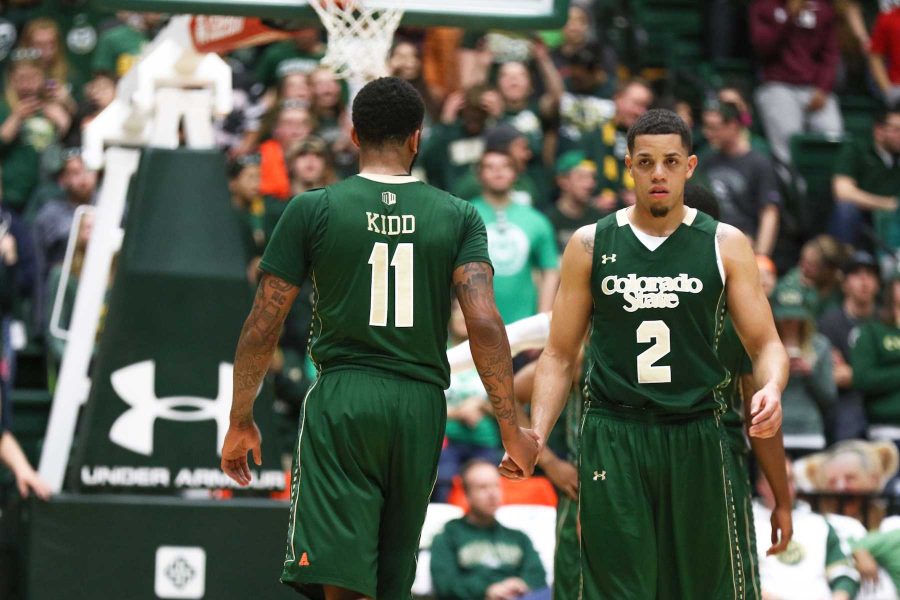 It looked like the game was going to get away from CSU on a few occasions but everyone seemed to lend a hand in the late rally. J.J. Avila was the driving force in the win though with 29 points, 13 rebounds, five steals and four assists.

“It shows our toughness,” Avila said. “It shows our resiliency. It shows how together we are. You could keep going on and on.”

CSU put the pressure on the Aggies, taking an early lead with its first 10 points coming in the paint. USU clamped down defensively though and the Rams could not get any outside shots to fall.

Foul trouble also began to plague the Rams as Daniel Bejarano and Joe De Ciman both picked up two fouls in the first nine minutes.

A dunk by David Collette gave the Aggies their first lead of the game with 10:00 to play in the first. It came in the middle of a 10-0 Utah State run. CSU went scoreless for six and a half minutes as Utah State built a 21-14 lead.

The Rams finally responded with a 6-0 run of their own. Avila completed an and-one to reclaim the lead with 1:19 in the half but a sloppy finish saw USU head into the break up 33-32. CSU went 1-for-12 from behind the arc in the first.

The Aggies looked ready to shoot down CSU’s tournament hopes as they opened the second half on an 8-0 run behind consecutive threes from Chris Smith. He led USU with 24 points.

Back-to-back 3-pointers by Daniel Bejarano and Gian Clavell trimmed the score to 45-44, but Utah State pulled away again momentarily thanks to Jalen Moore and David Collette. Moore scored 14 and grabbed a team-high nine rebounds.

Another USU 3-pointer, this time by Darius Perkins, extended the Aggies lead to 59-51. For a moment, it looked like outside shooting would be the difference.

But, John Gillon helped provide a spark to the offense as the Rams closed the gap. The sophomore finished with six points, five assists and four rebounds with all of his points coming from the charity stripe.

Avila grabbed an offensive rebound and eventually tied things up at the line after Collette fouled out of the game with 2:24 to play.

After another three by Perkins, Avila then responded with a tough scoop layup to put CSU up 69-68.

“We knew it was going to come down to the wire,” Avila said “That’s all you really want to do on the road is be in the game, and that’s what we were.”

Daniel Bejarano then blocked a Smith layup attempt. Avila got the rebound and fired an outlet to a streaking Stanton Kidd who dunked it home to put CSU up 71-68. Kidd finished with 14 points.

USU had the ball down 73-70 with a chance to tie but Darius Perkins passed up an open look. Clavell picked off a pass and was able to ice the game at the line. He scored 17 points and grabbed seven rebounds while coming off the bench.

“At the end, we just needed to step it up and get the stop that we wanted to,” Clavell said.

The Aggies never recovered and the Rams spoiled the last home game of USU head coach Stew Morrill’s career. Morrill was the head coach at CSU from 1991-1998.

With the win, the Rams secured a third-place conference finish. They are now off to Las Vegas for the Mountain West tournament at the Thomas & Mack Center. CSU will face Fresno State in the No.3 versus No.6 matchup Thursday at 9:30 p.m. MT.

“I really believe we can do some damage on neutral courts,” Avila said. “There’s no more homecourt advantage from here on out.”

Collegian Sports Reporter Emmett McCarthy can be reached by email at sports@collegian.com and on Twitter at @emccarthy22.