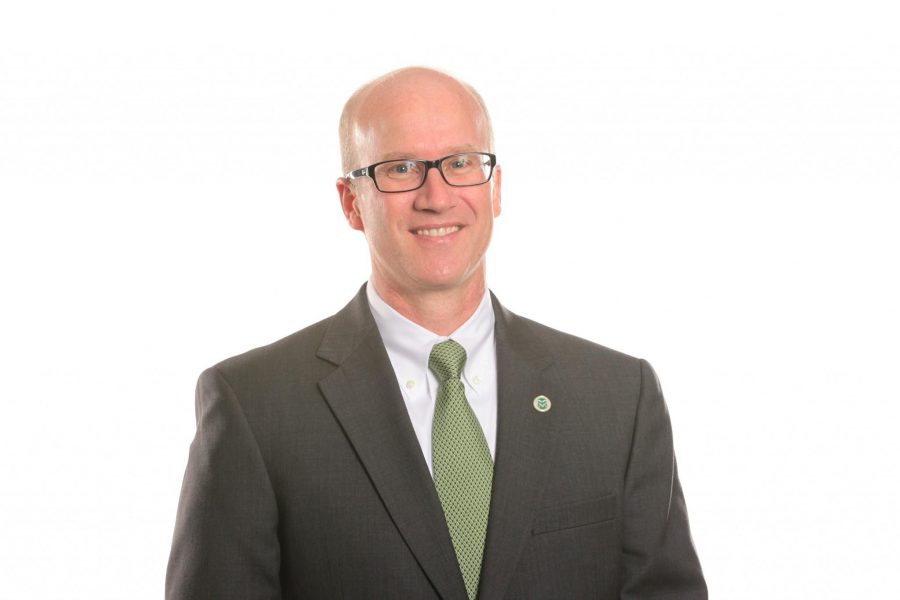 Joe Parker stood before a crowd of nearly 100 green and gold-clad fans, alumni and administrators Tuesday morning with a smile stretching from ear to ear. A dream more than 25 years in the making finally came true as Colorado State University president Tony Frank announced the 50-year old former deputy athletic director at Texas Tech as the newest director of athletics at CSU.

“I’m learning through the process every day, and I’m still learning what a special place this is,” Parker said. “All of you know that, because you get to live here in this community. I’m proud of what we’re doing here, and there’s been a ton of great work done here, and there’s going to be more work done in the future. It has all the ingredients to be the preeminent program in the Mountain West Conference and in the country, I believe.”

Parker, who served as the deputy A.D. at Texas Tech after stops at Michigan, Oklahoma, Washington State and the University of Texas, brings more than 20 years in athletic administration to Colorado State, where he will take over the duties of athletic director after Jack Graham was removed from the position in Aug. 2014.

He was a three-time All-American swimmer at the University of Michigan, and also earned a gold and bronze medal at the 1987 World University Games. He received his bachelor’s degree in economics from Michigan and an M.B.A. from Texas.

During his time as Texas Tech, Parker oversaw a program with 17 Division I teams and an annual budget of $68.5 million. The university achieved its first ever sellouts for football season tickets and also set new highs in attendance for football, men’s basketball and baseball.

“I think Joe knew he was ready to take the next step and become the athletic director at a major college program,” Frank said. “It was just a question of the right opportunity. The right opportunity was also out there looking for him, and we’re fortunate that Colorado State University found him as well. I’m confident that as we go forward that you’re going to see a man in Joe Parker that understands the business that intercollegiate athletics is and the opportunities that come along with that.”

Parker comes in to a very different situation than Graham did, though. In 2011, Colorado State was in the process of rebuilding its football and men’s and women’s basketball programs from the ground up. Today, CSU ranks at the top of all Division I programs in wins in the major four sports (volleyball, men’s basketball, women’s basketball and football) with 91 wins between the four sports and a winning percentage of .827.

The University has also finished a number of renovation projects, including upgrades to the concourses at Moby Arena, the addition of multiple video boards inside the arena, a new athletic training facility and is now heading toward the beginning stages of breaking ground on a $220 million on-campus football stadium project.

“I think the foundation now versus the foundation three and a half years ago is very, very different,” Frank said. “I think that has allowed us to attract great candidates, whether that is a head football coach or an athletic director. There’s been a lot of progress made and we don’t want to lose that progress on what we’re building.”

Though the challenges he will face at CSU are vastly different than the ones he faced at a “Power Five” school in Texas Tech, Parker is well-versed in expanding the infrastructure and overall reach of athletics at a public university. During his time in Lubbock, Parker led the development and recent launch of a $185 million fundraising campaign. During his eight-year tenure at the University of Michigan, Parker served on a four-person team that was responsible for more than $400 million in infrastructure improvements, while also securing $14 million in annual gift revenue and $31 million in major gifts to support the renovation of Michigan Stadium.

“I’ve encountered this situation at other places,” Parker said of the on-campus stadium project. “When you have a facility that’s 50-plus years old, and a lot of schools have addressed this, you start looking for ways to improve and enhance the deficiencies but at some point it’s functionally obsolete. Hughes (Stadium) has served for 50 years and there’s been wonderful memories created in that facility. But I will tell you an on-campus stadium will only amplify the experiences that this University has related to its football program.”

After his numerous stops around the country, Parker almost abandoned his hope of being an athletic director to focus more on his family, who he says he wanted to be about to keep in Lubbock. But after his two children, Emma and Will, both high school sophomores, heard of his decision to not pursue the opportunity, they spoke privately with his wife Jennie, urging them to look for an A.D. job, even if it meant having to leave their school behind.

“In college, I had just finished my final round of exams and I was sitting around with some friends having a conversation about what we wanted to do after reflecting on our time as undergrads,” Parker said. “The question came up among the group of, ‘What do you want to do in 20 or 25 years?’ And I didn’t have a very good answer and I kind of hoped the conversation might die down before it reached me. But it didn’t, and spontaneously and without any hesitation, I said I wanted to be an athletic director. And today you’ve helped me fulfill that goal and I thank you very much for that.”