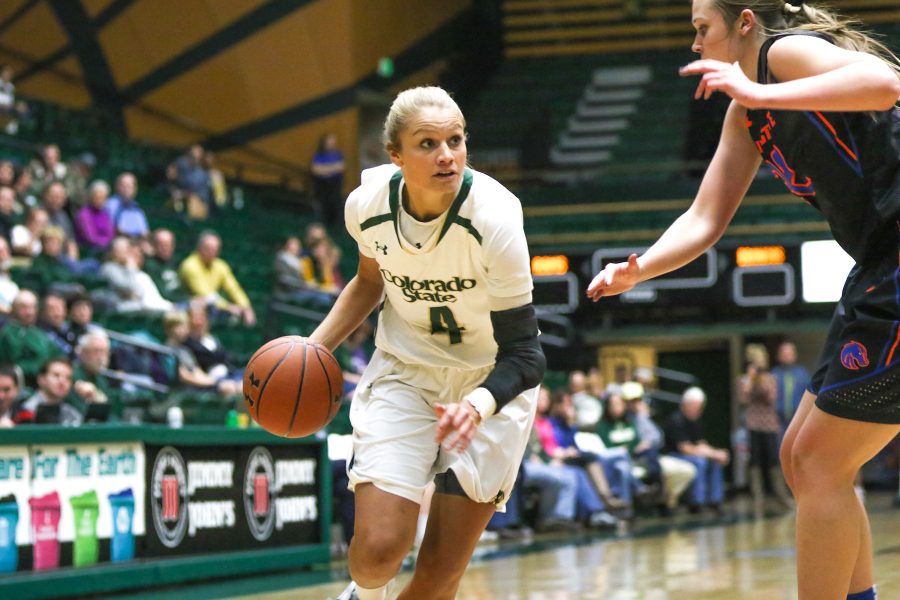 Border Wars between Colorado State University and University of Wyoming can bring out emotions from players and fans on both sides.

Sometimes, those emotions stem from a game almost a year in the past, as is the case with the Cowgirls women’s basketball team’s hard feelings toward CSU. CSU handed them a loss in triple overtime last March in the semifinal round of the Mountain West Tournament.

“I know some of the Wyoming players, and hang out with them on a personal level,” CSU senior guard A.J. Newton said. “I know they still talk about the triple-overtime game, and they’re still upset about a whole year later.”

The Cowgirls’ hard feelings might have been augmented after CSU picked up its first win in Laramie in 13 years earlier this year in the season’s initial Border War matchup. The Rams (15-5, 7-2 MW) came away with a narrow three point victory 58-55.

“You know Wyoming has revenge on their minds and they’re going to come in here hungry,” CSU head coach Ryun Williams said. “We know we’re going to get a great effort, a determined effort, from Wyoming. We always do.”

Newton said her team is looking forward to Wednesday’s rivalry game as a means of moving on from Saturday’s disappointing 53-49 loss at Fresno State. The game left the Rams trailing the Bulldogs by two games in Mountain West play, instead of tied for the lead had they won.

“We were so close,” Newton said of the Fresno State game. “We got a little rattled, but it’s time to move on to Wyoming. I know they take the game really seriously because it’s the Border War, and so do we.”

The Rams will have to take Wyoming’s “big three” of Marquelle Dent, Kaitlyn Mileto and Mountain West Preaseason Player of the Year Kayla Woodward seriously for a win Wednesday night. The trio accounts for nearly 65 percent of UW’s scoring production, with Dent averaging 17.2 points per contest, ranking the junior second in the MW. Woodward chips in another 15.7 points per game, while Mileto acts as the Cowgirls’ 3-point threat, averaging 11.1 points with 67 percent of her attempts coming from behind the arc.

“There’s not a better trio in the league than those three at scoring the ball,” Williams said.

But the Rams have had a knack for shutting down their opponent’s best players this season. In their win over Boise State last week, the Rams held standout Bronco guard Deanna Weaver to just six-second half points, and on Saturday Fresno State leading scorer Alex Sheedy shot just 1-for-14.

“I think our kids are competitive and they know that it’s important to try to reduce the touches or efficiency of the other team’s best player,” Williams said. “And usually we have the right matchup on them. We have some versatile defenders that can contain some people. We can throw a variety of different lengths, and quicknesses and strengths at a player.”

Newton said she would have the duty of chasing Mileto off the 3-point line. The senior guard from Colorado Springs shoots 41.2 percent from deep, which ranks 2nd in the MW.

“This will be my fourth time playing against (Mileto), so I know what she likes to do, she likes to shoot really far,” Newton said. “Making sure I’m on her and she doesn’t get any clean looks (is key).”

The Rams are a different team than when they last met the Cowgirls in Laramie, partly as a product of the furthered offensive balance due to players like Alana Arias’ and Elin Gustavsson’s increased production. Additionally, Newton barely played in Laramie as it was her first game coming back from a knee injury that kept her out over a month.

“I think we’re quite a bit different,” Williams said. “Gritt’s minutes have really increased, AJ is now in the starting rotation. We’ll play differently than we did in Laramie. We hope it’s just as effective.”

But Williams said the Cowgirls are different too. UW heads into Fort Collins coming off two huge wins over Utah State (86-51) and Nevada (61-45).

“I know it’s a personal game and we’re going to respect it like that,” Newton said.