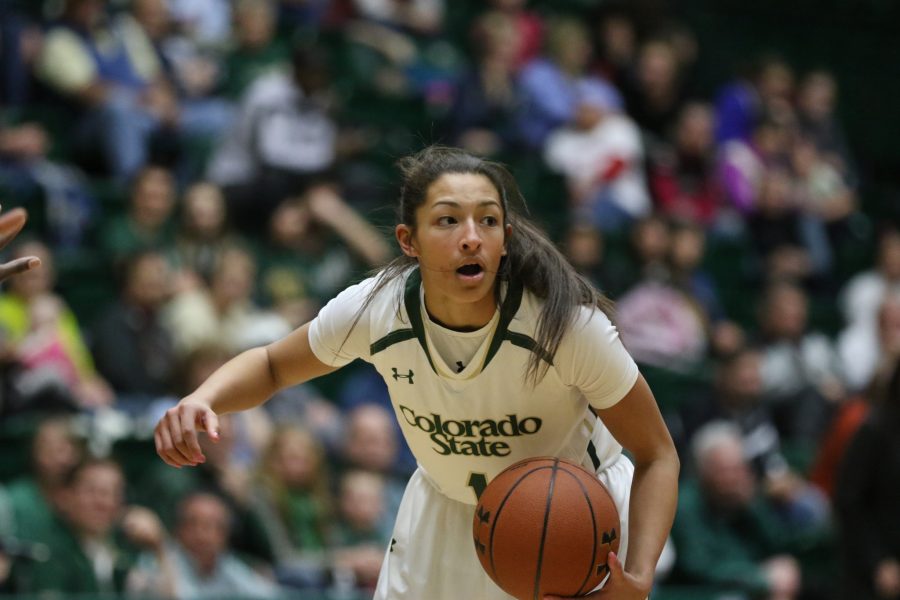 The Falcons started strong, leaping out to an early 11-4 lead as CSU struggled to find the net for the opening four minutes. But the Rams must have been scared straight as they proceeded to rattle off an incredible shooting streak.

After Ellen Nystrom scored a layup, Jamie Patrick turned the Rams’ luck around from 3-point range as she hit one to cut the AF lead to 11-9. That was the first of a string of five straight CSU 3-pointers made by Patrick, A.J. Newton and Hanne Mestdagh.

“I just think the kids changed their mindset basically,” CSU head coach Ryun Williams said of his team’s quick comeback. “We didn’t have to change anything X and O wise, we just needed to do things with a greater concentration. It took us a little while to respond and once we did we got into a nice flow, and a really nice second half.”

In the midst of a first-half shooting display, Newton capped off an 18-0 CSU run with a free throw to push the score to 22-11 with 9:48 still to play in the first, before Madeline Philpot ended AF’s scoreless streak with two free throws of her own. Newton hit 5-for-8 from the field that included three 3-pointers in the first for 14 points at the break, all without Gritt Ryder on the floor as she picked up two early fouls and spent most of the half on the bench.

“Me and Gritt have a duo thing going out there, that happens in any game when one of us has early foul trouble or isn’t there,” Newton said.

CSU’s first-half lead grew as high as 14, 29-15, with 6:11 before the buzzer, but the Rams’ placement of the Falcons into the double-bonus prevented the score from getting too out of reach before the break. Air Force came back to cut the Rams’ lead to just nine at the break, 37-28, largely due to help from the charity stripe. Air Force shot 11 of 13 from the line in the first half while enduring a 12 minute stretch without a field goal.

A dominant CSU offense right out of the locker room basically put the Falcons away just three minutes into the second half. The Rams made their first six shots of the second half, carrying them on a 10-2 run that gave them a 45-30 lead with 16:55 still to go.

From there, CSU simply controlled the game, easily extending its lead to 30 points, 66-36, by the eight-minute mark.

CSU forward Veronika Mirkovic, a freshman out of Nassjo, Sweden, received some precious minutes of playing time down the stretch. Immediately upon checking in, Mirkovic connected on a 3-pointer from the top of the key, her first of the season, exciting her teammates into grinning cheers.

“That was huge,” Newton said of Mirkovic’s shot. “Everyone was so happy. She’s capable of shooting that, it wasn’t a surprise that she shot it or that she made it.”

Williams was satisfied with his team’s efficient high-scoring offense on the road.

CSU’s next game is at San Jose State Wednesday night at 8 p.m. MT and will be streamed on the Mountain West Network.