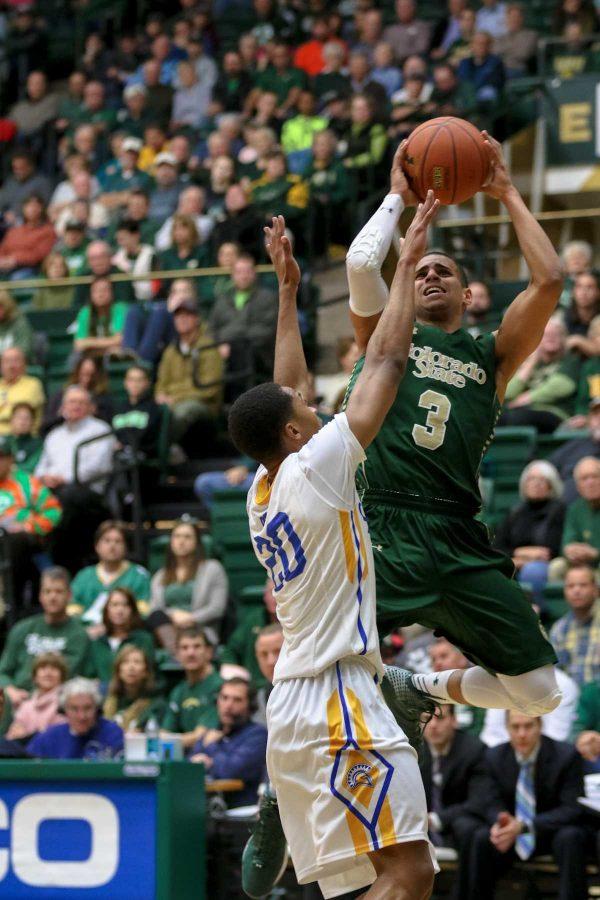 Daniel Bejarano showed how he became the first player in CSU history to record 1,000 points, 600 rebounds and 200 assists in just three seasons. The senior filled up the stat sheet with eight points, seven rebounds and six assists.

“I was just trying to play a good game but I have so much going through my head,” Bejarano said. “I’m not trying to downgrade San Jose State because they’re a great team despite their record, but it was difficult.”

Fellow senior Stanton Kidd scored 14 points and came away with two steals. Junior guard Joe De Ciman nearly stole the show though, as he led the team with a career-high 18 points and nine rebounds.

“There is nobody playing better on our team right now than Joe,” CSU head coach Larry Eustachy said. “… It’s unbelievable what he has become.”

Senior center Marcus Holt got his first career start in place of senior J.J. Avila, who sat out with back spasms. Holt, a graduate of Rangeview High School in Aurora, Colorado, got the Rams on the board first.

“It was a big moment, not just for Marcus, but for us as a team to see him start,” Bejarano said.

Holt pulled down an offensive rebound moments later that led to a 3-pointer from Daniel Bejarano and sparked an 11-0 CSU run. The Rams went up 17-3 on Bejarano’s second three of the night. CSU grabbed four offensive boards in the first two minutes, and out rebounded SJSU 44-30.

A trifecta of threes from Fred Richardson, Joe De Ciman and Gian Clavell extended the lead to 28-9 with 8:10 in the half. The lead grew to as much as 37-12 before the Spartans managed to narrow the gap with their shooting.

SJSU scored their first 21 points from behind the arc. They did not shoot a single free throw in the first half. Their only 2-point field goal of the half came with just three seconds remaining on a layup by Rashad Muhammad.

The Rams went into the break leading 41-23. They turned the ball over just once in the opening frame.

CSU’s offense looked a bit flat to start the second, but Tiel Daniels cleaned up enough of the Rams’ misses to prevent the Spartans from taking advantage. The junior pulled down 14 rebounds, including seven on the offensive glass.

But, the Spartans never really went away. Jaleel Williams connected on his fourth 3-pointer of the game to cut the lead to 60-51 with 7:22 to play. He led all scorers with 20 points, and Muhammad finished with 18.

The Rams finally tightened up defensively though. Sixth man Gian Clavell scored 12 while coming off the bench to help put the game away along with De Ciman.

“We knew what was coming,” De Ciman said. “The hardest part about tonight was just Senior Night, knowing it would be our last time in Moby and not playing with these four guys anymore.”

Bejarano and Kidd checked out with 51 seconds remaining and received a standing ovation. They were honored after the game with framed jerseys, along with fellow seniors Avila and Holt.

“I didn’t cry as much just because I cried throughout the whole day,” Bejarano said. “I didn’t go to bed until 5 a.m. I couldn’t sleep. It was hard for me.”

Eustachy said after the game that words can’t describe what Bejarano has meant to the program over the past three years.

“I thought that was a nice way for our seniors to go out,” Eustachy said. “It’s unfortunate J.J. couldn’t play, but they’re a great group — a special group.”

Eustachy added that he believes Avila will be ready to play next game.

CSU has a week off before traveling to Reno to take on Nevada. The Rams tip off against the Wolfpack on Wednesday, March 4 at 8 p.m. The game can be seen on the MW Network.