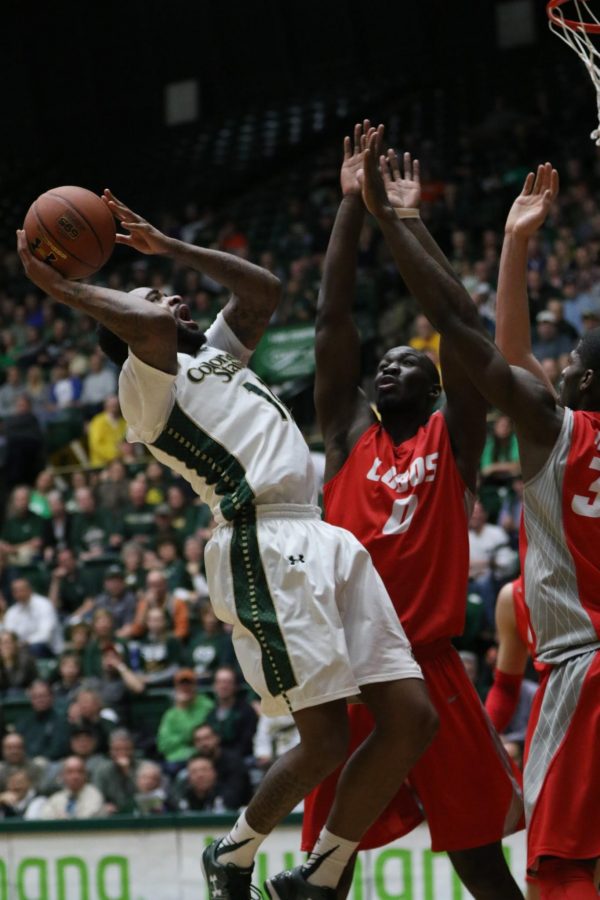 It was the eighth time this season that the Rams held their opponent to less than 60 points. They finished with eight steals and five blocks.

“We stayed within our principles,” senior forward J.J. Avila said. “I think that is one of the best defensive games we have played. They just scored at the end off those turnovers and stuff, but I’m really proud of our guys.”

CSU became the first program to score 70 points against UNM this season. Avila led the team with 18 points, and Joe De Ciman scored 14 points while going 4-for-7 from behind the arc.

The Rams took it to the Lobos early, forcing 12 first-half turnovers resulting in 14 points. CSU went up 10-2 early behind a 3-point barrage from Daniel Bejarano and De Ciman.

“Our rhythm all started on defense,” De Ciman said. “We made a conscious effort to have a good start on the defensive end. It’s easy playing with these guys. I get wide open looks all the time just because of the attention they bring.”

The Lobos turned the ball over five times in the first eight minutes. CSU capitalized with an 8-0 run to extend the lead to 24-10 with 8:57 left in the half.

Bejarano hit a floater on the next possession to enter a unique club. The senior guard became the third player in CSU history to record 1,000 points, 600 rebounds and 200 assists, joining Rich Strong (1983-1986) and Brian Greene (2000-2003). He finished with 12 points, and led the team with eight rebounds.

“It’s cool and all, but I’m just glad that we got the win,” Bejarano said. “I couldn’t do it without the guys that have been here.”

John Gillon hit a 3-pointer at the buzzer to put the Rams up 35-19 heading into the break. New Mexico scored just three points over the final six minutes of the first half. CSU scored 14 points off turnovers in the first half compared to none by UNM.

The second half saw the Lobos’ offensive struggles continue. A 3-pointer from Hugh Greenwood at with 14:22 left to play snapped a five-minute scoreless drought for UNM and sparked an 11-2 run by the Lobos.

CSU had offensive struggles of its own over the final 20 minutes. The Rams shot just 32 percent in the second half, which allowed UNM to climb back into the game.

“I thought for 30 minutes we did terrific, and then we got a little tentative offensively,” CSU head coach Larry Eustachy said.

Deshawn Delaney hit a tough bank shot with 2:48 left to cut the CSU lead to 59-51, but that was as close as the Lobos would come before Bejarano hit a 3-pointer then assisted Gian Clavell on a layup to ice the game. Delaney led all scorers with 21 points.

For Bejarano and De Ciman, it is the first time they have beaten New Mexico in six meetings.

“We were talking about it earlier – we were 0-5 before tonight,” De Ciman said. “It feels good to beat them. Now we know we have to move on to San Diego State, but it was a long two and a half years.”

The Rams are on the road Saturday to take on the Aztecs. The game tips off at 6 p.m. and will be broadcast on CBS Sports Network.