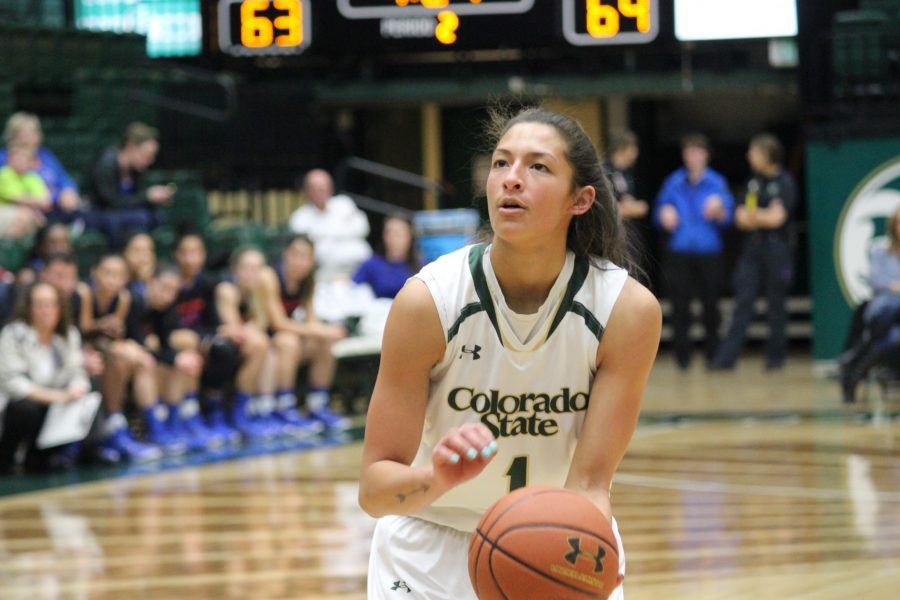 CSU guard/forward Victoria Wells shoots a free throw during a game earlier this season. Wells has been an integral part in the team 17-6 start. (Photo by Abbie Parr)

Revenge tastes sweeter when it requires a hard-fought battle.

That’s what Colorado State’s women’s hoops team (15-4, 7-1 MW) discovered Wednesday night when they came out on top of Boise State (13-6, 5-3 MW) by a mere one point 83-82 in a true start-to-finish fight with the only team to hand them a loss in the Mountain West.

Senior guard Gritt Ryder gave the Rams the final point they needed at the free throw line with 14 seconds remaining in a game that featured eight ties and nine lead changes.

But that free throw was the conclusion of a string of several potentially game-winning swings for the Rams as they made some ill-advised plays down the stretch.

With the Rams up 82-80, CSU guard AJ Newton snagged a crucial rebound and was immediately sent to the foul line for two shots and an opportunity to seal the deal by pushing the CSU lead to four with 19 seconds left. But the senior missed both, and on the rebound CSU’s Victoria Wells — who saw her first action in over a month Wednesday night in her return from a concussion —  fouled Brooke Pahukoa, who went to the line and tied the game with two free throws.

It was then that Ryder drew a blocking foul in the back court and missed her first free throw, but made the second for the victory.

“It always sucks to miss the first, it’s better to miss the second mentally,” Ryder said of her last-second free throws. “But I just tried to breathe and I knew I had to make it.”

Eight of the game’s nine lead changes came in the second half, as the Rams stormed out of the locker room to erase the 12-point 49-37 lead the Broncos carried into the locker room. Out of the gate, both teams managed an incredible efficiency from the 3-point line, combining to connect on nine for their first 11 shots from deep and turning the first half into a shootout.

“I thought we were in for a long night the way they (Boise State) started shooting the ball,” CSU head coach Ryun Williams said.

Boise State standout guard Deanna Weaver tallied 11 first-half points, but CSU emphasized shutting her down in the second and held her to just 17 for the night.

“We didn’t talk about offense at all at halftime,” Newton admitted. “I think we were all just kind of upset (Weaver) was killing us. She was just killing our whole team effort, so I think at half we (decided) whoever is on her needs to make it their mission to stop her.”

Wells and Ellen Nystrom did the honors of guarding Weaver after halftime and held her to just six points in the second.

It almost looked as if Nystrom and Ryder had decided to switch roles, as Nystrom started out the second half bringing the ball up the floor. After opening the half hitting a jumper, the Swede found Ryder for a the first of a string of huge 3-pointers the senior hit. Ryder scored 14 points in the first seven minutes of the second frame. CSU’s first lead of the half came on an ultra-deep and wild three Ryder drilled as the shot clock expired, starting an eruption in Moby Arena.

“I think it was just the competitiveness, (thinking) we’re not losing this game (that allowed the run),” Ryder said. “My teammates did a great job of getting me some open shots.”

“We got enough stops in the second half, and Gritt got us off to a great start,” Williams said. “That was critical, to close that gap as quickly as possible.”

Ryder finished the game with 24 points to lead the Rams, 19 of which came in the second half, while Nystrom added eight in the second half for 11 total. Newton chipped in 13 points while also grabbing six rebounds, including some big ones down the stretch to help secure the win.

“Everyone boxed out and it just comes to me, so I just gotta make sure I catch it,” Newton said of her rebounding.

“We had to play exceptional — maybe our best game of the year — to beat that team,” Williams said. “Great resolve by the Rams today.”

The win over Boise State sets up another revenge showdown for CSU this weekend at Fresno State, who is undefeated in the Mountain West and the only team ahead of CSU in the conference standings. The Bulldogs upset the Rams last year in the final of the Mountain West Tournament. Tipoff is set for 3 p.m. MT.